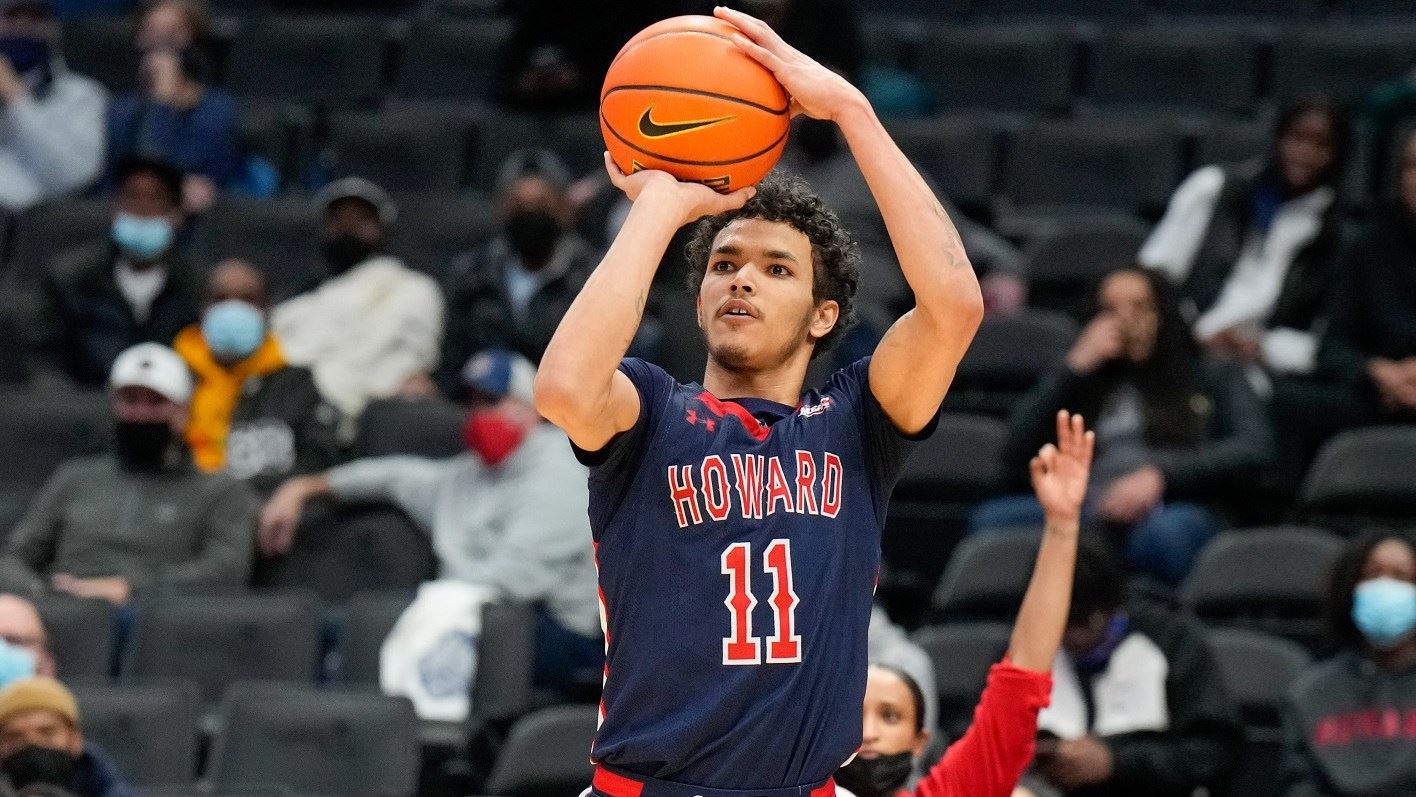 Howard a team to watch in MEAC Tourney

Third-year head coach Kenny Blakeney has engineered a remarkable turnaround at Howard producing the first winning season in 20 years. The Bison enter this week’s MEAC tournament as a second seed but open with a seventh-seeded Coppin State team Wednesday that has handed them two of their five losses in conference play.

The Bison were the surprise team in the league in their second full season under local Washington D. C. DeMatha High School product and Duke graduate, Kenny Blakeney. They finished 16-12 overall, 9-5 in MEAC play.

How significant is that? Howard has not finished with a winning record in 20 years. One has to go back to the 2001-02 18-13 season under veteran coach Frankie Allen to find a Bison team that finished North of .500.

Coppin State and Norfolk State are the only teams that have swept their two MEAC games with Howard this season.

The performance of this year’s Howard team has made nearly everyone forget about, let’s call it, ‘the Makur Maker experiment.’ Blakeney’s landing of the 6-10 former top 20 recruit brought unprecedented national attention to Howard and HBCU basketball. It was the forerunner to Deion Sanders at Jackson State landing top football recruit Travis Hunter.

Maker got to play only a couple of games for Blakeney before injuries and the COVID-19 pandemic put a halt to the 2020-21 season.

What this year’s performance has shown is that there was more substance to Blakeney’s landing of Maker than hype.

This season, Blakeney has deftly blended young talent from his native DMV area with a group of savvy veterans. It has allowed the Bison, in the now new eight-team MEAC, to vault over perennial power NC Central and others to second in the standings. The Bison swept NCCU in their two games this season.

The key veteran has been 6-6 grad student Kyle Foster. The sharpshooting Foster, from the same Bethel program in Tidewater Virginia that produced Allen Iverson, is in his fifth year at Howard. Prior to this season, Foster had shown occasional flashes of brilliance as a sniper. This season, that brilliance has been on display weekly. Blakeney has given him confidence and the proverbial ‘green light.” He’s become the Bison’s leader

As a result, Foster has been atop the nation’s 3-point shooting stats all season and enters the tournament first in the NCAA in 3-point shooting percentage at .462. Foster has canned a remarkable 103 of 223 3s on the season. His 3.7 3s made per game in fourth in the nation. In this Steph Curry-inspired era, those numbers are NBA worthy. His .462 marksmanship is better than current NBA leader Luke Kennard’s .450. The numbers are also likely to earn Foster a look in the NBA.

The curly-haired Foster, voted first team all-MEAC last week, was third in MEAC scoring at 16.1 points per game behind leader Joe Bryant Jr. of Norfolk State’s 16.8 ppg. He likely also finished just behind Bryant in the league player of the year voting.

SIx-seven forward Randall Brumant and 6-3 guard Tai Bibbs are both grad seniors who have provided a hard-nosed toughness to Blakeney’s line-up. Both were with Blakeney as an assistant at Columbia before he took the Howard job in 2019.

Brumant has averaged 9.4 points and team-bests of 5.3 rebounds and 39 blocks. He has converted on 91 of his 145 shots from the field for a league-best .628 shooting percentage. His reliable and solid play in the paint earned him a third-team all-MEAC designation.

Bibbs has been just as steady. He averaged 8.6 points per game and often draws the defensive assignment to cover the opposition’s top scorer.

Settle, at only 175 pounds, is a hybrid that blends point-guard skills with incredible length. Playing for a talented DeMatha program, he was barely recruited. He was a 5-9 point guard that grew almost a foot before he finished his career there. Blakeney took a chance that the former 145-pounder would blossom, and he has.

The fundamentals and basketball IQ developed at DeMatha were in evidence as the slender star found a variety of ways to score this season. In his most impressive display, he scored a career-high 25 points against Notre Dame in a nationally-televised MLK Day Classic game at Howard. His near 50 percent (.495) shooting percentage from the field and 13.8 points per game average, just behind Foster in Bison scoring stats, have been key contributors to the Bison’s rise.

One former MEAC head coach said Settle is going to be “a problem” for future Howard opponents.

Though just a freshman, Hawkins has been the engine to the Bison’s offense that averages a league-best 77.1 points per game.

He tops the conference in assists at 5.7 per game and puts in a hefty 13.0 points per game, third on the team and eighth in the conference. Blakeney has had to live with his 104 turnovers but knows those numbers will come down with experience. Junior guard Khalil Robinson comes in off the bench to share those point guard duties and relieve some of the pressure on Hawkins.

Hawkins was the clear choice for the MEAC rookie of the year award. Settle and Hawkins were both second team all-MEAC selections.

The prospects are bright for a possible run by the Bison in the tournament. To do that, they’ll need their veterans to play like vets and their youngsters not to play like youngsters. That’s a tall task. But given their experience over the course of the season and the confidence Blakeney has instilled in them, it should be interesting. Their first task is to get by their nemesis, Coppin State, Wednesday.

In the Bison’s favor is that all five starters (Foster, Brumant, Bibbs, Settle and Hawkins) shoot above 70 percent from the line. That stat should bode well in late-game situations.

The veteran Norfolk State team (22-6, 12-2) is a solid favorite to take home the title and repeat as champs. The Bison threw a scare into the Spartans at Howard (a 77-74 loss) in mid-January as Foster had 22 points. The Spartans handled them easily last week in Norfolk, 83-61 as they limited Foster to just eight.

The Bison will be a team to watch without a doubt.

Howard a team to watch in MEAC Tourney