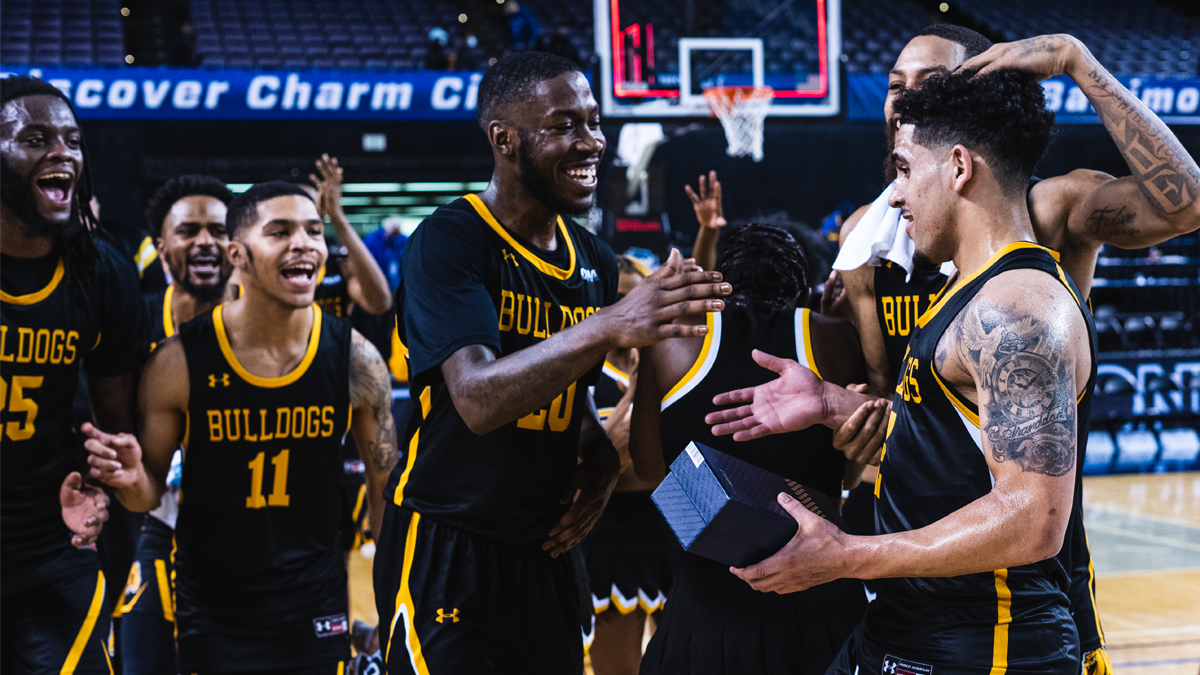 Bowie State came into the CIAA Tournament with a woeful record, but the home team found a way to advance.

BALTIMORE, Md. – Sophomore guard Anthony Carpenter (Reisterstown, MD) had a hot shooting night from beyond the arc as the Bowie State men’s basketball team downed the Vikings of Elizabeth City State, 60-52 Tuesday night during the opening round of the CIAA Tournament at the Royal Farms Arena.

Carpenter hit five 3-pointers including three in the second half and finished with a season-high 17 points in Bowie State’s win that snapped a seven-game losing skid for the Bulldogs.

“We had a great crowd tonight,” said head coach Darrell Brooks. “We were excited for our players to play this tournament here and we just wanted to come out, play hard together. I thought we did a tremendous job on the glass and I think that was one of the big reasons why we won.”

Bowie State held a 38-33 advantage on the glass, including 28 defensively to go along with five blocks, three of which came from sophomore David McCullough (Bowie, MD). The Bowie native, turned in a 14-point performance, highlighted by eight at the half as McCullough shot 6-of-8 from the field while adding seven rebounds and two assists to his stat line.

The Bulldogs got off to a great start in the first minute of action, scoring five unanswered points before the Vikings scratched the scoreboard on a 3-pointer. From there, the ECSU managed to tie the tilt at 7-all at the 16:47 mark but Bowie State used a 12-7 spread to push its lead 19-14 with 7:40 left in the opening half.

A layup from graduate senior Kobby Ayetey (Accra, Ghana) and a pair of free throws from the Vikings created an exchange of points for both teams until Carpenter scored the last five points to extend the Bulldogs command 28-18 at halftime.

In the second half, it remained all Bowie State. The Bulldogs had groomed a 15-point lead on an 8-3 run and maintained at least 10-point gain up until the Vikings used a 13-3 scoring spread to pull within seven with 4:33 left in regulation. ECSU’s Jayden Beloti scored in transition through a pair of Bulldogs at the 2:41 mark but a dunk for McCullough after a turnover eliminated any chance of a Vikings comeback – solidifying a response victory for Bowie State who suffered a setback to Elizabeth City State just three days ago.

Carpenter was named the game’s Food Lion MVP after shooting 5-of-7 from the 3-point line. He also finished with five rebounds, a steal and an assist.

Bowie State (8-20) will advance to the quarterfinals of the CIAA Tournament with a meeting with No. 1 seed Virginia Union Wednesday, Feb. 23 at 8:50 p.m.