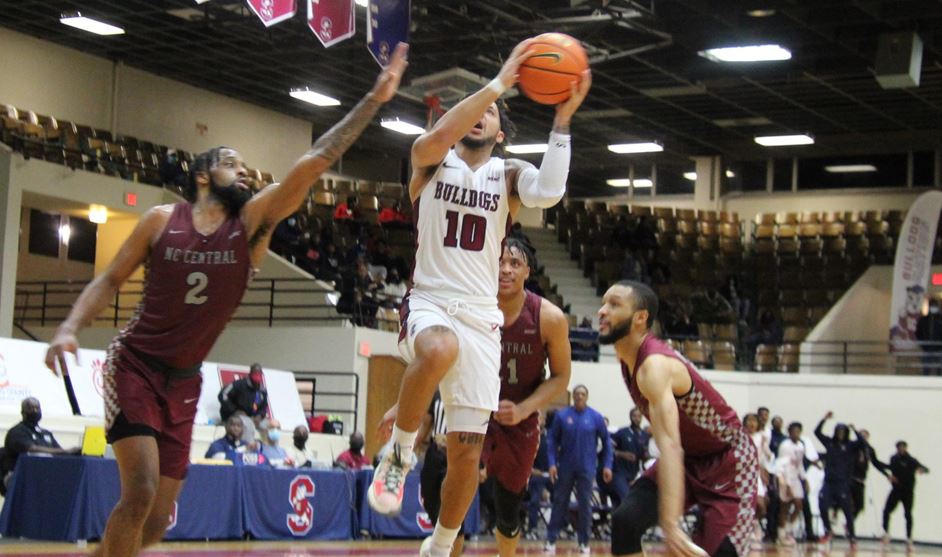 North Carolina Central had its eagle eye on the top spot in the MEAC but South Carolina State spoiled the party on Monday night in Orangeburg. SCSU (12-11, 4-3 MEAC) managed a close 74-68 win over NCCU (10-11, 4-2) who was coming off a quality win last week over Norfolk State.

Freshman guard T.J. Madlock tossed in a team-high 20 points and grabbed five rebounds for the Bulldogs. Rahsaan Edwards chipped in with 17 points, Edward Oliver-Hampton had 12, and Omar Croskey finished with 11 points.

NCCU’s Eric Boone led all scorers with 28 points on Monday night including a perfect 4-4 on three pointers.

The battle of the boards was one of the statistical story lines heading into the game. SCSU leads the conference in rebounding, while NCCU gives up the fewest rebounds across the league. That turned out to be a virtual deadlock with the Bulldogs narrowly winning that battle 31-30 on Monday.

South Carolina State also had a negligible lead with points in the paint at 34-32. The statistic that might have been the difference was bench points, the Bulldogs outscored the NCCU bench 22-10.

North Carolina Central sits in second place in the MEAC after picking up its second conference loss. Norfolk State is still at the top with a 6-1 record after its loss to the Eagles in Durham. South Carolina State is moving up the standings after two straight wins. The Bulldogs are now 4-3 in conference putting them in a three way tie for third place.