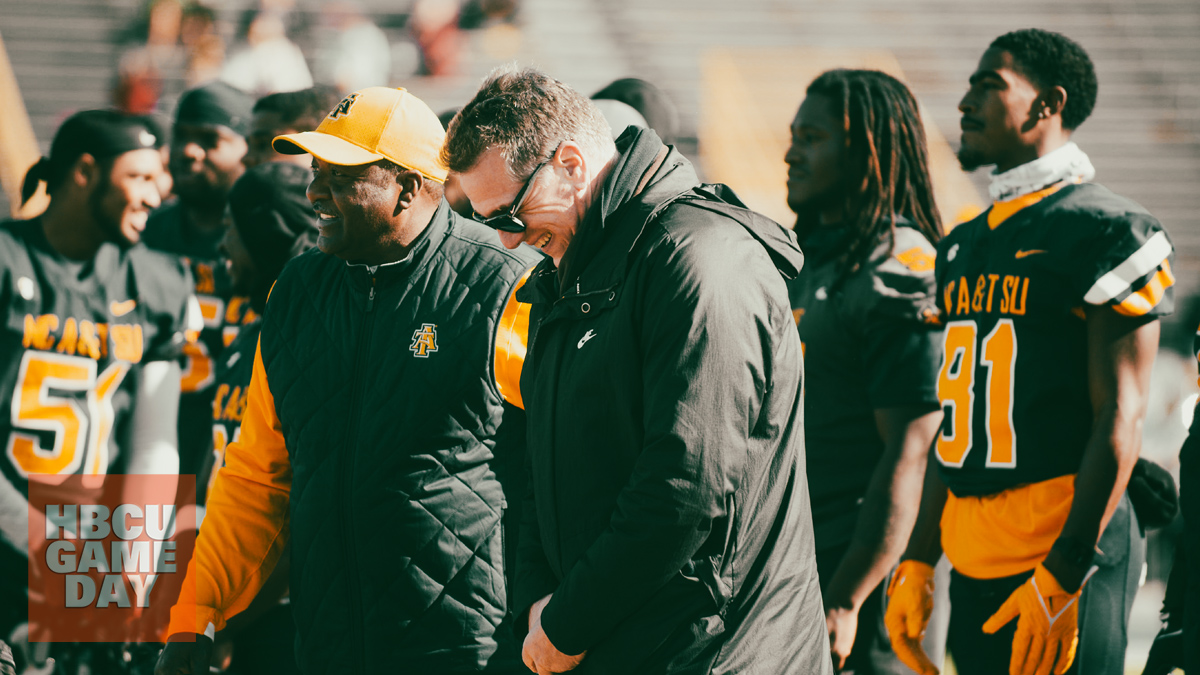 Hampton has bolted from the Big South to the CAA. Coupled with departures by football-only members Kennesaw State, Monmouth and North Alabama, it leaves new Big South member NC A&T and AD Earl Hilton with a lot of questions to ponder.

Hampton University’s decision announced Tuesday to bolt from the Big South Conference, which it joined in 2018, to join the Colonial Athletic Association (CAA) after this season, is the latest earthquake on the HBCU landscape.

If it’s not an earthquake, it is certainly a rumble or a tremor. At minimum, it’s a thunder roll portending a coming storm. It is another shake-up to the foundation of the HBCU athletics environment and it is reverberating not only across the HBCU front but the college football bow as well.

In reality, such is the environment of NCAA college athletics today. Div. I athletics and the NCAA have been described as “fractured,” with realignment and jockeying for position at a feverish pace. Some have opined that the situation is untenable. The NCAA just completed its 2022 convention in Indianapolis and some sports experts are saying the system is on the verge of being torn up from its root.

What many HBCU and college athletics’ observers want to know however, is the reaction of first-year Big South member North Carolina A&T to Hampton’s decision.

HBCU Gameday asked NC A&T Director of Athletics, Earl Hilton. To say Hilton is concerned would be an understatement.

Hampton left the CIAA and NCAA Div. II status in 1995 to move up to another HBCU conference, the Div. I Mid Eastern Athletic Conference. The Pirates left HBCU conference affiliation all together when it jumped to the Big South Conference in 2018. The Pirates, the primary founding member of the CIAA – the league was birthed in 1912 on its campus – left behind a combined 100 years of HBCU competition (83 years in the CIAA, 23 in the MEAC) for its new digs in the Big South.

Three years later, in 2021, North Carolina A&T, also a former CIAA member, decided to pursue a similar path. The Aggies, one of the primary founding members of the MEAC in the early 1970s, decided to leave that 50-year HBCU home to also join the Big South.

The move by NC A&T triggered Florida A&M and Bethune-Cookman to also leave the MEAC. Rather than move out of the HBCU conference arena, FAMU and B-CU decided to join another HBCU league, the Div. I Southwestern Athletic Conference (SWAC).

NC A&T’s decision also raised questions about the long-term efficacy of such a move. Those questions would seem to be amplified now.

What it means for A&T?

Hampton’s departure as a full-time member of the Big South coupled with the additional departures after this season of football-only members Monmouth to the CAA, and Kennesaw State and North Alabama to the Atlantic Sun, reduces the number of football programs in the Big South from nine to five. It leaves NC A&T with just four other football-playing institutions in its new conference.

The reduction to only five football-playing institutions in the Big South threatens its status as a Div. I FCS conference. The NCAA requires every conference to have at least six football-playing institutions to compete on the FCS level.  It also puts the league’s automatic bid to the Football Championship Subdivision (FCS) playoffs in jeopardy. The NCAA can issue a conference a one-year waiver to address the shortfall, if it receives a request.

HBCU Gameday reached out to Big South Conference Commissioner Kyle Kallander on Monday to talk about how his league would proceed but has not made contact with him.

The fact that Hampton was actively seeking to leave the Big South and pursue CAA membership was one of the worst kept secrets in FCS or HBCU athletics.

The CAA at one time wanted no part of Hampton or likely any other HBCU program. That tune likely changed in November when CAA power James Madison announced that it was leaving the conference to move up to FBS status and join the Sun Belt Conference. It opened the door for Hampton to be invited to the CAA, a long term wish of longtime Hampton president, William R. Harvey.

Kenenesaw State and North Alabama announced their impending move to the ASUN in 2022 almost a year ago. Monmouth’s official word of its move to the CAA came over the last week.

The realities is all those changes are here. Now.

While acknowledging the currency of conference realignment, and the frequency and speed at which programs across the college athletics spectrum are engaging in it, Hilton has tried to keep focused on one thing.

Hilton refers to this as opportunities for competition for its student/athletes.

“That would probably get my attention faster (than conference realignment) as we look at our teams, our sports programs, and do they have an appropriate level and amount of competition available in our current situation,” Hilton said.

Obviously, with the departures of the four schools, that would have to be of concern to Hilton now, at least in Big South football.

“No doubt,” he said. “We’re continuing to evaluate the circumstances and situations and we will make decisions that are in the best interest of our student/athletes and NC A&T.”

Hilton said realignment, which is shaking up Div. I athletics across the board, is an ever-growing trend. He said it is incumbent on any leader to look around, explore options. Keeping your head on a swivel would be one way to describe it.

“I think that’s a good business practice for almost any industry,” Hilton said. “As an AD or as a CEO, I think you would always be scanning the horizon, scanning the environment trying to pick up on trends, or signs or developments that might impact you positively or negatively.

“So certainly as an AD, it is something that I believe it’s an exercise you go through regularly – five years, seven years, eight years – to look around and say, ‘Am I in the right place? Is this still working for our institution. What aspirational objectives do we have and are they being realized in our current situation? And to make decisions and plans consistent with the data you gather as you ask those questions.”

“So I don’t think it’s a new thing to be aware of the possibility of realignment. What does feel different or new now is the speed with which it’s happening and the number of institutions that appear to be involved,” Hilton said.

That means those questions, answers and decisions have more of an immediate requirement.

Where does NC A&T go?

Without specifically speaking to Hampton or Monmouth’s departure to the CAA, Hilton did speak generally about how he handles such developments.