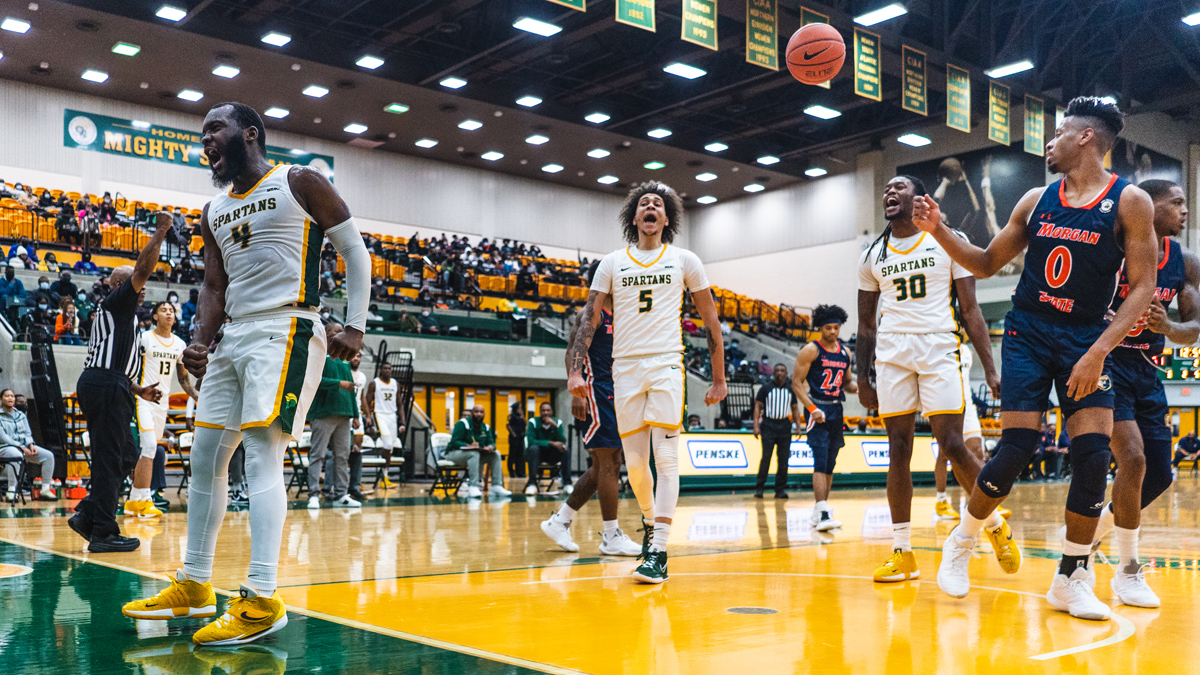 Norfolk State has ascended to the top of the MEAC mountain and it doesn’t look to be ready to come down soon.

NORFOLK, VA — It was a cold January night on the campus of Norfolk State University on Monday night — but only on the outside.

Inside Joseph Echols Arena was a smoldering group of young men wearing green and gold. They weren’t quite Shadrach, Meshach and Abednego but Jalen Hawkins, Christian Ings and Joe Bryant ignited a Norfolk State offense that made Morgan State feel the heat all night long.

NSU used a second half-surge to separate itself and come away with an 82-62 win over its MEAC rival. The trio of Hawkins, Ings and Bryant score 18 points apiece as NSU led by as many as 27 points in the second half in front of a national television audience.

The game was fairly tight in the first half as NSU went into the locker room up 35-33.

The Spartans emerged from the break on fire, hitting 3-pointers in rapid succession and putting distance between themselves and the bewildered Bears from Baltimore.

“I thought we played a good second half. First half was just OK. You know, I always say, like when we get to MEAC games, we have a just national TV jitters,” NSU head coach Robert Jones said after the game. “Even though we’ve played on national TV like nine times this year with all the games that we played. So… I still can’t figure out that dynamic after 15 years, but it happens every year.”

Norfolk State and its coach battle-tested

Jones has been around the NSU program for more than half its Division I tenure, arriving in 2007 as an assistant under Anthony Evans.  He’s seen a lot in the program’s evolution as it has gone from trying to prove its success could translate at the Division I level to the Great Upset of 2012 to a string of disappointing finishes in the MEAC Tournament.

There’s a little bit of grey in his beard now, but he’s still a young man at age 42. Jones credits the pandemic for helping him mellow out, which he says has helped him become a better coach.

Time isn’t often a luxury for basketball coaches these days, and Jones knows this.

“Now a lot of times coaches don’t get to an eighth or ninth year for it to slow down if it doesn’t slow down and get you out of here,” Jones said with a laugh. “But, you know, I was fortunate enough to have some success to be around for now.”

Norfolk State and Jones seem to be headed in the right direction. After claiming its first MEAC title and NCAA Tournament appearance under Jones, NSU has matured along with its coach. Its current 14-4 record is its best through 18 games at the Division level despite losing the bulk of its key contributors from last season. Players like Bryant, Hawkins and Ings have stepped up big as NSU looks to defend its title.

“As far as the team as a whole, I still think that we’re in spurts getting used to people giving you the best shot because a lot of times, you know, we were we were always one of the top teams, but was like, we were a hunter in a sense,” Jones said. “But now you know, we’re hunted every single game, and I think we still getting used to that intensity that people are giving us.”

At 5-0 with only one close MEAC game so far, teams will have to bring their A game to knock the Spartans off their pedestal.