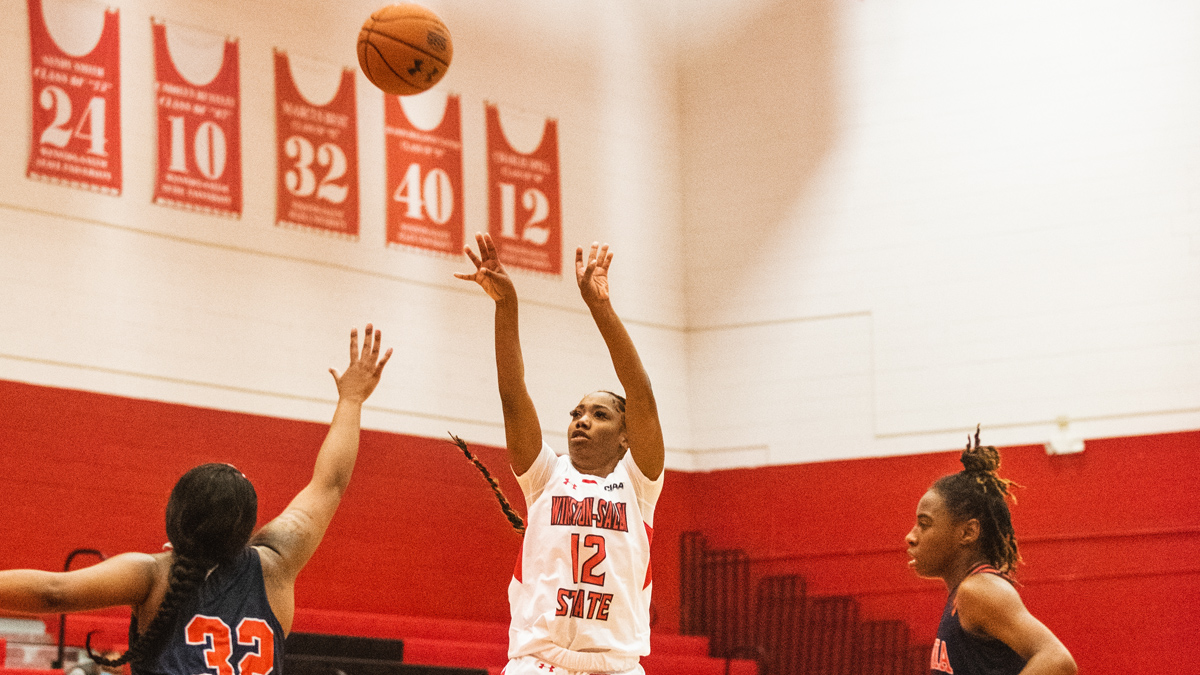 WSSU women getting a lift from talented freshmen

Tyliah Burns and Kennedi Simmons were stars in high school before coming to WSSU in 2020.

There have been several WSSU women’s basketball games where Tyliah Burns looked like a freshman. Saturday against Shaw she looked like the player that head coach L’Tona Lamonte was excited to get to 601 S. Martin Luther King Jr. Dr.

The Winston-Salem State women crushed once-mighty Shaw 96-44 to pick up their second win in a row. Leading the way for the WSSU women was Burns who finished with 20 points on 8-for-10 shooting, including four 3-point connections. Several of the long-range bombs were accompanied by backward strides that were confident — perhaps borderline cocky — as the margin between the two teams continued to grow. Her waist-level brown and blonde braids swayed back-and-forth behind her, taunting the CIAA rivals from Raleigh without uttering a word.

WSSU got off to a 19-1 lead in the first quarter before Shaw woke up and cut the lead to nine at the end of the first quarter. That would be about as close as Shaw would get as WSSU outscored it 71-28 over the next three quarters to come away with a blowout victory.

Three other WSSU players joined Burns in double-figures. Brooke Spaulding had 16 points, six assists and six rebounds for a solid all-around game. Amaya Tucker had 15 points and redshirt freshman Kennedi Simmons had 12. The WSSU women shot a sizzling 60 percent for the game and hit 55.8 percent of their 3-point attempts.

This was just the type of game the WSSU coaching staff imagined when they offered Tyliah Burns and Kennedi Simmons.

“Both young ladies know how to win,” head coach Lamonte said. “Tyliah won four straight state championships and Kennedi won two state championships. Both scored over 1,000 points in high school and have been MVPs of various high school tournaments. We were adamant on them two because they could add to what we are building here.”

“They just welcomed me and I love the environment,” Burns said of why she chose WSSU.

Then 2020 came and did what 2020 did, and the CIAA put basketball on the shelf for what would have been Burns and Simmons’ first seasons on the court.

Still, going from high school stars to college player hasn’t been without its bumps in the road. Burns opened the season starting, scoring 15 points in an overtime loss to Concord. But injuries and adjusting to the college game have seen her have ebbs and flows.

“I just had to settle ink,” she said. “The first couple of games I was real hyped up. I had to settle in and my team, they cheered me up all those other games and helped me come up.”

Lamonte says that the new blood injected into the program are helping push the program forward.

“The freshmen and transfers have enhanced the competition in practice, they know what it takes to win in games, and they’re not afraid of the moment,” she said.

After her breakout game against Shaw, the future is looking bright for Burns. She doesn’t have to carry the offense — Amaya Tucker is the CIAA’s second leading scorer — but if she can continue to progress, that bodes well for WSSU.

WSSU will host Virginia Union on Wednesday, making up a game postponed last month due to COVID-19.

WSSU women getting a lift from talented freshmen