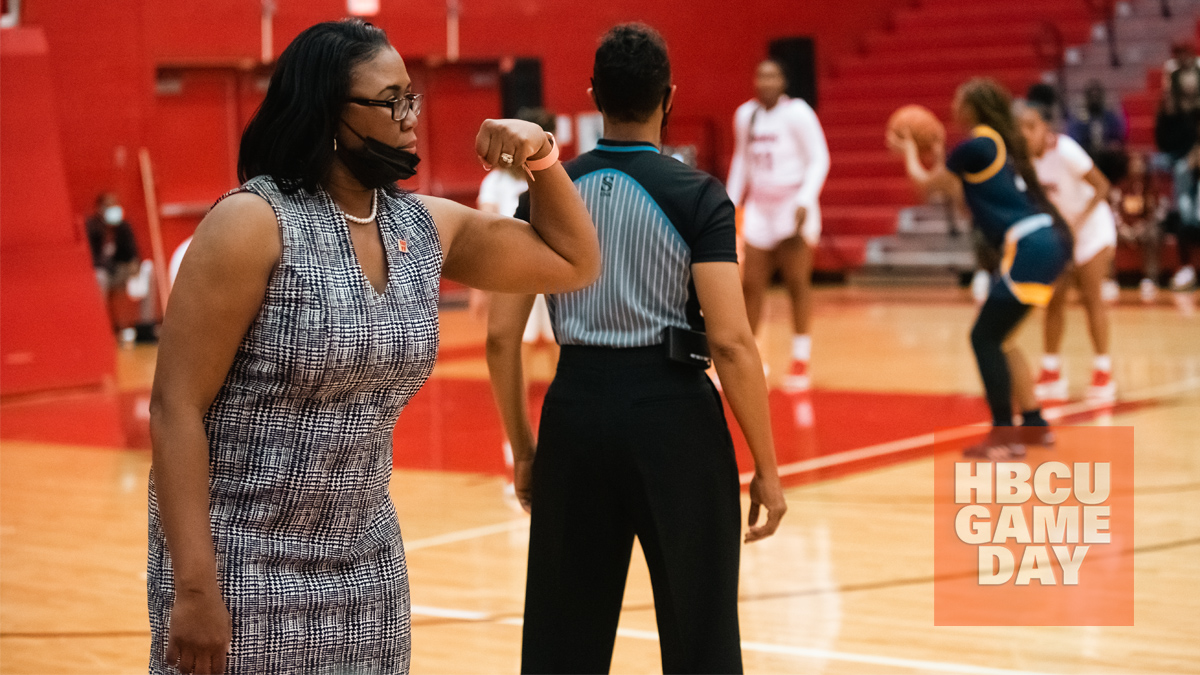 Winston-Salem State is off to a solid start to the 2021-22 season. But solid isn’t good enough for head coach L’Tona Lamonte.

Winston-Salem State women’s basketball coach L’Tona Lamonte was about as disgusted as any coach could be with a 28-point win.

Her team had just beaten Carolina University 67-39 in the first official game in the C. E. Gaines Center since February 2020 in front of a typically rambunctious crowd in what they call “The Little Big House.”

Lamonte was thrilled with the crowd, especially with no men’s game to follow as the Rams were in Atlanta.

“It was very electric, to be honest with you, we had students all over — and I wasn’t expecting that. I mean they packed the stands,” she said, cracking as close to a smile as she would get on this night. “So having that — the energy that they brought — and the girls being able to get out of their rooms and go play, that means so much to me.”

What she wasn’t thrilled about was her team’s performance against the National Christian College Athletic Association (NCCAA) program located five minutes down the road. A highly-energetic leader who can get a bit demonstrative on the sidelines, it took quite a bit of effort for Lamonte to stay in her seat as her team compiled turnovers at a higher rate than she would like and started out cold from the 3-point line.

“We’ve got to do a better job controlling the ball. The last two games, or now three games where we’ve had over 20 turnovers and that’s ridiculous when teams are not pressing. So we need to control the ball. Being able to get a feel for the game, knowing what shots to take, when to take them.”

Even with all those issues, it was still a near 30-point win. And by no means is Lamonte a grouch. She’s actually the complete opposite — a pleasant presence that shows up at other teams’ sporting events to cheer for them. She’s someone that even CIAA rivals who don’t particularly like the team from 601 S MLK Blvd. think highly of. But beneath that endearing demeanor lies a burning desire to take her program to a place it has never been.

WSSU’s gym — named for Hall of Fame coach Clarence “Big House” Gaines — is full of banners. Wall-to-wall and several rows full of them, including the 1967 NCAA title. But none of those banners belong to the women’s basketball program. That’s something that Lamonte is fully aware of as she played at WSSU in the mid-to-late 1990s.  And she’s not running away from it.

“We’re the only team on this campus that has never won a championship,” Lamonte volunteered during the preseason CIAA media session. “That’s the one thing that — with recruiting — we’re trying to get everyone to buy in like ‘hey, we can be the first. You can make history. You can do something that’s never been done before.’ But it all takes steps. It’s not going to happen overnight. We literally have to make sure we’re getting better every day. I don’t care where we start. It’s where we finish.”

Winning in CIAA women’s basketball isn’t easy. The top teams in the league are always amongst the best in the country at the Division II level. Shaw won an NCAA title in 2012 and ran the league for a while before Virginia Union wore the crown for what seemed like forever. Fayetteville State is the reigning CIAA champion, a team that WSSU will likely have to beat if they want to make history.

The WSSU women are 2-1 this season after tipping off the season in West Virginia after missing all of the 2020-2021 season due to COVID-19. They opened up the season with an overtime loss to Concord before bouncing back with a five-point win over the hosts the following day. Unlike the performance on Wednesday, Lamonte was happy with the way her team played to start the season.

“Both of them are really good 3-point shooting teams, they run people off the line, so they give us a taste of what the region looks like,” Lamonte said of the Rams’ first two opponents. “And it’s also prepared us for Alaska and the team this Saturday. This team, this Saturday, they’re going to come out shooting threes, run the motion offense. So we have to make sure we make adjustments, but it’s definitely helped us.”

The WSSU women will host a tough USC-Aiken team on Saturday before traveling up the road to Boone to take on Appalachian State University. The team will then fly to Anchorage, Alaska. Yes, that’s right — Alaska.

“We’re going to number 14 in the country, Alaska Anchorage,” she said, breaking out her trademark grin. “So it’s a great trip for our team. You know, a lot of them have not been on an airplane before. They’re going to a different area, another climate that they get to adjust to, but it’s a trip they’ll remember for the rest of their lives.”

Lamonte spent more than a decade as a Division I assistant before coming home to take over the program. She wanted to give her team the chance to take a big trip, so she and her team got creative and did a raffle to raise the money to help pay for the trip.

“We’re just trying to make sure that they get a good experience of college,” she said. “Coming from DI, we took trips all the time. And when I came here, that was one thing that I told them I would like to do.

For Lamonte, it’s all about taking her program to new heights. She’s already doing it literally. But her eyes are on the big prize, which is why a 30-point win — on this night, at least — wasn’t enough.