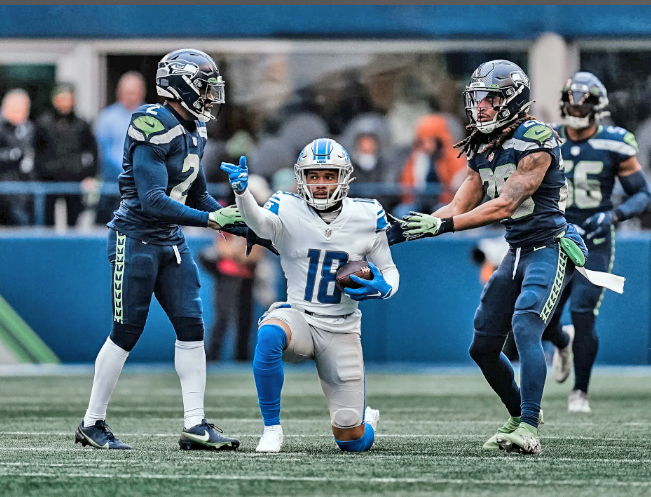 Prairie View product Khadarel Hodge (#18) had his best day of the season while Darius Leonard again showed whey he’s an all-pro. Check out those two and the rest of the HBCU NFL players on this week’s ProFile.

For HBCU NFL player Khadarel Hodge of Detroit, it was a career day. For Indy’s Darius Leonard, it was business as usual.

Hodge, a fifth-year veteran out of Prairie View A&M, had a chance to shine with several of Detroits’s top receivers out because of health and safety protocols.

In the Lions 51-29 loss to Seattle Sunday, Hodge was targeted a career-high ten times. He finished with five catches for 76 yards, the largest output of his career. The most impressive play of the day came when he set up the Lions’ second touchdown. He dove to make a 42-yard catch.

Hodge caught the passes from back-up QB Tim Boyle. Boyle was playing for starter Jared Goff who was out with a knee injury.

Hodge has spent most of the season as a backup playing on special teams. He has proven to be worthy of increased reps on offense as the season has progressed.

Leonard had another monster day but it was not enough as the Colts fell to Las Vegas, 23-20. But Leonard did all he could do. He talked about his frustration after the loss.

The three-time all-Pro linebacker out of South Carolina State stuffed the stat box. He registered seven tackles, six solos. He added an interception, a forced fumble and broke up one pass.

The forced fumble, on a tackle of Raiders’ back-up QB Marcus Mariota, was his career-best seventh of the season. He is currently tied for first in the league in forced fumbles. Though the ball came out inside the Indianapolis 10-yard line, the Raiders were able to get back on the ball.

Despite missing two games, Leonard has 114 tackles on the season for the 9-7 Colts. This is the fourth 100-tackle season in his four years in the league.

Grambling State product Chester Rogers He cauwas again a key contributor on offense and special teams. He caught two passes for 13 yards and returned three punts for 28 yards In the Titans’ 34-3 win over Miami.

– #53 DARIUS LEONARD, LB, Indianapolis (4th season, SOUTH CAROLINA STATE) – In 23-20 loss to Las Vegas, Leonard had seven total tackles, six solos, one interception, one forced fumble – his career-high seventh of the year – and one pass defended. He also barely missed a sack on the Raiders’ game-winning TD drive. Leonard was in on all 62 defensive snaps (100%) and five special teams’ snaps (19%).

– #71 TYTUS HOWARD, OG, Houston (3rd season, ALABAMA STATE) – In 23-7 loss to San Francisco, Howard did not play because he is on the reserve COVID-19 list for the second straight week.

– #72 TERRON ARMSTEAD, OT, New Orleans (10th season, ARKANSAS-PINE BLUFF) – In New Orleans’ win over Carolina, Armstead did not play as he is out with a knee injury.

– #95 JAVON HARGRAVE, DT, Philadelphia (5th season, SOUTH CAROLINA STATE) – In 20-16 win over Washington, Hargrave was in on five total tackles, three solos and two assists, including one tackle for loss. Hargrave played 53 snaps on defense (84%) and one special teams’ snap (5%).

– #33 – ANTONIO HAMILTON, DB, Arizona (6th season, SOUTH CAROLINA STATE) – In 25-22 win over Dallas, Hamilton was in on 39 defensive snaps and five on special teams without a stat.