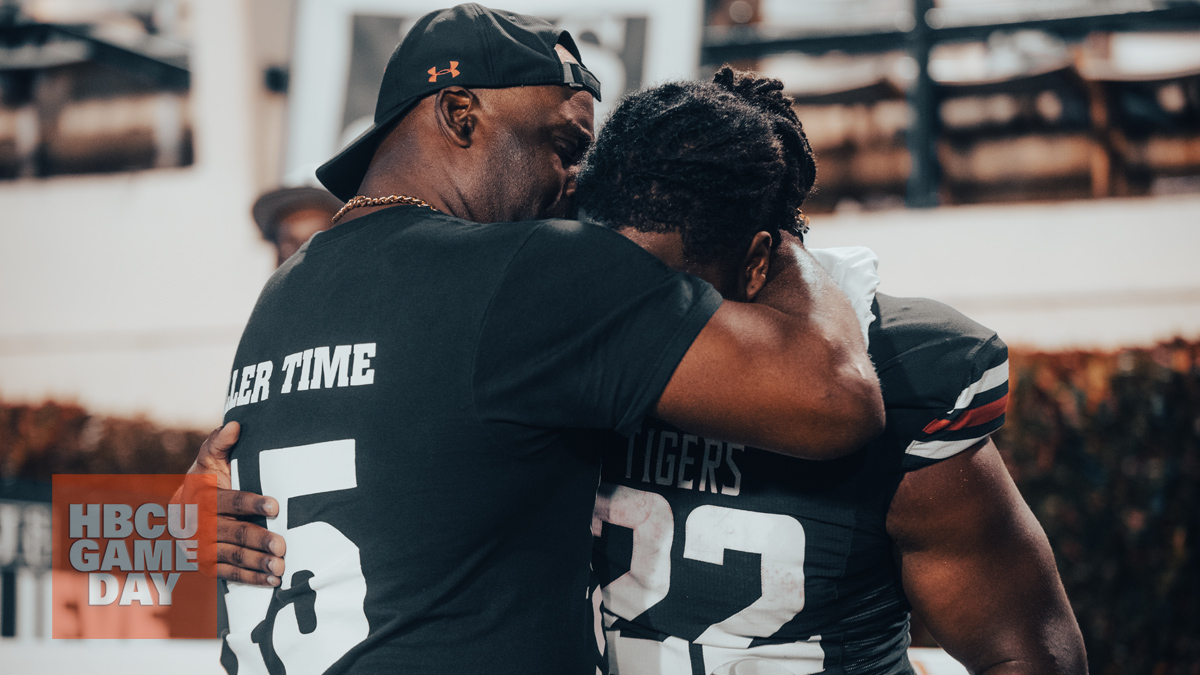 Peytton Pickett has played college football at several schools. But he has found home and a family at Jackson State.

A few hundred feet away from the locker room, Aubrey Miller Sr. embraced JSU running back Peytton Pickett and held a brief conversation with him. Pickett cradled his offensive most valuable player trophy after having just run for a season-high 107 yards and a touchdown while listening to his teammate’s father.

“I’m elated,” Pickett said when asked how it felt to be a champion. “Words can’t describe how I feel. How I feel about my teammates and my coaches, how I feel about everybody that goes here, and the city of Jackson. I love them.”

The Arlington, Texas native was still soaking up the moment and trying to process it all. It was quite a scene to take in. A crowd of 50k plus — the third of the 2021 fall season — had shown up to cheer JSU on to its first SWAC title since 2007.

Pickett took a long road to get to that moment. A two-star back out of Sam Houston High School, he started his collegiate career at UMass back in 2016 before transferring to Trinity Valley Community College in Athens, Texas where he spent the 2017 season before heading to Liberty. After finishing second on the team with 110 carries for 457 yards and nine touchdowns in 2018, he saw his carries cut down to just 24 in 2019. His touches went back up during the 2020 season, and he finished his career at the Far Right school with 225 rushes for 1,060 yards and 17 touchdowns.

With another season of eligibility remaining, Pickett was ready for a change. So he hit the transfer portal.

That’s where Aubrey Miller Sr. came in. His son, Aubrey Jr., was a four-star prospect heading into college. He began his career at Missouri, but injuries slid him down the depth chart, and ultimately he committed to JSU in December as part of Deion Sanders’ initial recruiting class. Miller shined in the spring, and his father was there to cheer him on consistently. So Pickett’s parents reached out to him.

“Peytton’s mom and dad, they called me (and asked) how do you like Jackson? They didn’t come in the spring. I said, ‘look, you got the opportunity of a lifetime,” Miller said on the field after the game. “You’ve got a coach that’s a major mouthpiece. And you got a chance to have national notoriety. But I said, ‘man, it’s up to you. If you want to work for it. But you can’t lay down and get it.”

Pickett said the decision to come in as a grad transfer wasn’t easy, but he felt — no, believed — it was where he was supposed to be.

“It was a tough decision to make, but I knew I needed to be, you know,” Pickett said. “I followed God — where God told me to come.”

Divine intervention aside — it wasn’t a cakewalk for Pickett and the rest of the JSU backs. JSU averaged just 3.2 yards per rush and has run for 95 yards per game as the defense and Shedeur Sanders and Co. have gotten most of the headlines.

But Pickett has a solid season himself, rushing for a team-high 435 yards and five scores and averaging 4.4 yards per run as JSU went unbeaten in the SWAC. And when his freshman quarterback finally played like a freshman in the SWAC title game, the grizzled veteran carried the load. And Aubrey Miller Sr. couldn’t have been prouder if it was Aubrey Jr.

Beyond his statistics and impact on the game, it was clear that Pickett — who is at his fourth college in five years — had made a deep connection in a short amount of time.

“When we came in this summer…We talked about coming in and making a difference,” Pickett said. “As a team, as a family. Everybody that transferred in, everybody that came in as a freshman here, but has been here, staying here. We came in. We want to make a change, create a change for years to come. Establish ourselves, put Jackson State back on the map.”

That mission has been accomplished. Now Pickett will look to finish his college career in storybook fashion with a trip to the Celebration Bowl on Saturday. The South Carolina State defense allows 3.8 yards per rush and has allowed eight of its 11 opponents to rush for 100 yards or more.