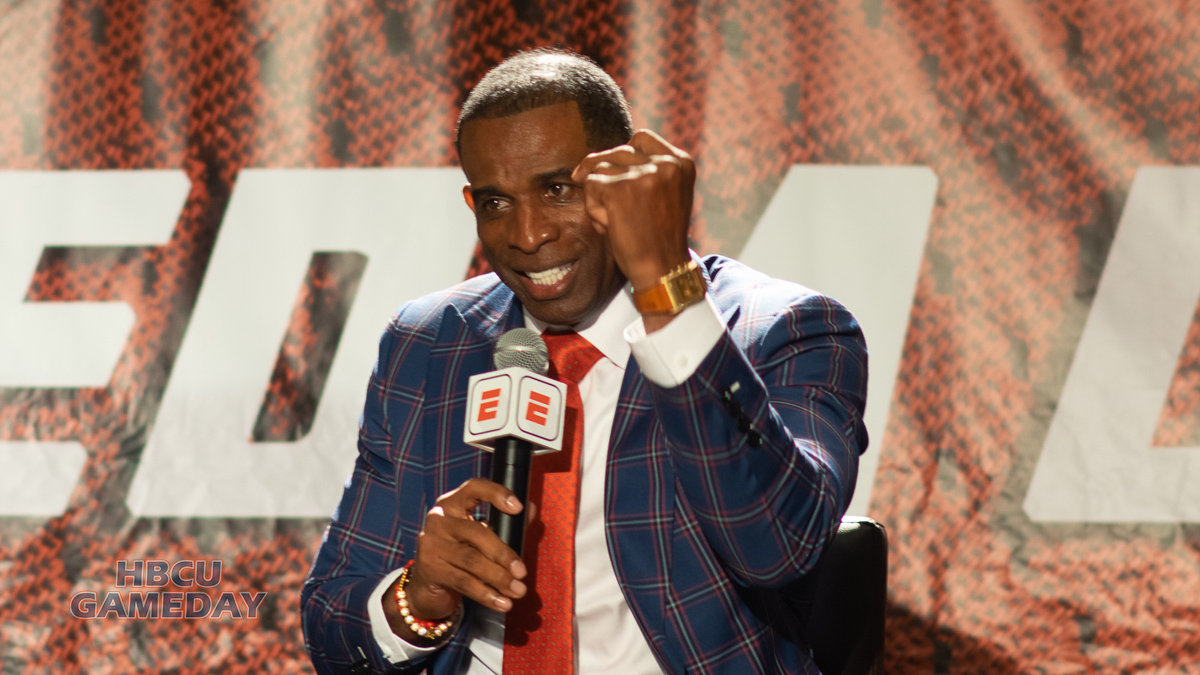 Deion Sanders has been named SWAC Coach of The Year, while several of his players, including Shedeur Sanders, picked up awards as well.

Deion Sanders now has one coaching award under his belt.

Sanders was named SWAC Coach of The Year by the league on Monday.

The Southwestern Athletic Conference announced its 2021 Football Postseason Honors on Monday morning. The all-conference teams and individual award winners were voted on by the league’s head coaches and sports information directors.

Alabama A&M’s Glass closed one of the most impressive careers in league history with a fitting final campaign, recording 3,568 passing yards, 36 touchdowns and 356.8 yards per game along with a 160.8 passing efficiency in ten games. He recorded five games of at least 400 passing yards in Fall 2021, including resetting the program’s NCAA Division I Era record with 462 yards in a single game. Additionally, he has been named one of 25 finalists for the Walter Payton Award representing the top player in the Football Championship Subdivision (FCS) and was the first selection to the Inaugural HBCU Legacy Bowl.

Florida A&M’s Land was one of the top players in the nation this past season as he was selected as one of 25 players named to the Buck Buchanan Award Finalist list. At the conclusion of regular season play he led the nation with 25.5 tackles for loss and 19 sacks. Land also added three forced fumbles, two pass breakups, and one fumble recovery. He was named Week 4 BOXTOROW Player of the Week after a three-sack performance. Land was also named SWAC Defensive Player of the Week after setting a Rattlers’ record five sacks versus South Carolina State. He recorded a sack or tackles for loss in ten of the 11 games this season and recorded two or more sacks in five games and did the same for tackles for loss in six games.

Jackson State’s Houston concluded regular season play as one of the most dominant defensive lineman in the SWAC. During regular season play he totaled 59 tackles (44 solo) and 20.5 tackles for loss for -125 yards. Houston also contributed 14.5 sacks for -102 yards, seven forced fumbles, two fumble recoveries, one defensive touchdown, and eight QB hurries. The Tigers featured the top-ranked defense at the conclusion of regular season play and allow just 13.8 points and 258.3 yards per game.

Jackson State’s Sanders had a stellar debut season for the Tigers as he has been named a finalist for the Stats Perform FCS Jerry Rice Award. At the conclusion of regular season play he led the SWAC with a 68.7 completion percentage while passing for 2,971 yards (2nd in SWAC), 28 touchdowns (2nd in SWAC) and only five interceptions. Sanders averaged 270.1 passing yards (2nd in SWAC) per game while leading the Tigers to an undefeated 8-0 record in league play and their first SWAC Championship appearance since 2013.-

Jackson State’s Deion Sanders led the Tigers to a 10-1 overall record and a perfect 8-0 mark in SWAC regular season play. Under Sanders’ leadership the Tigers are currently ranked in the top 15 of the FCS Coaches Poll and are also ranked in the top 25 of the Stats FCS Poll. The Tigers claimed the SWAC East Division title for the first time since the 2013 season. For his efforts Deion Sanders has been named a finalist for the Stats Perform FCS Eddie Robinson award.

A complete listing of all-conference selections and individual award winners is listed below.