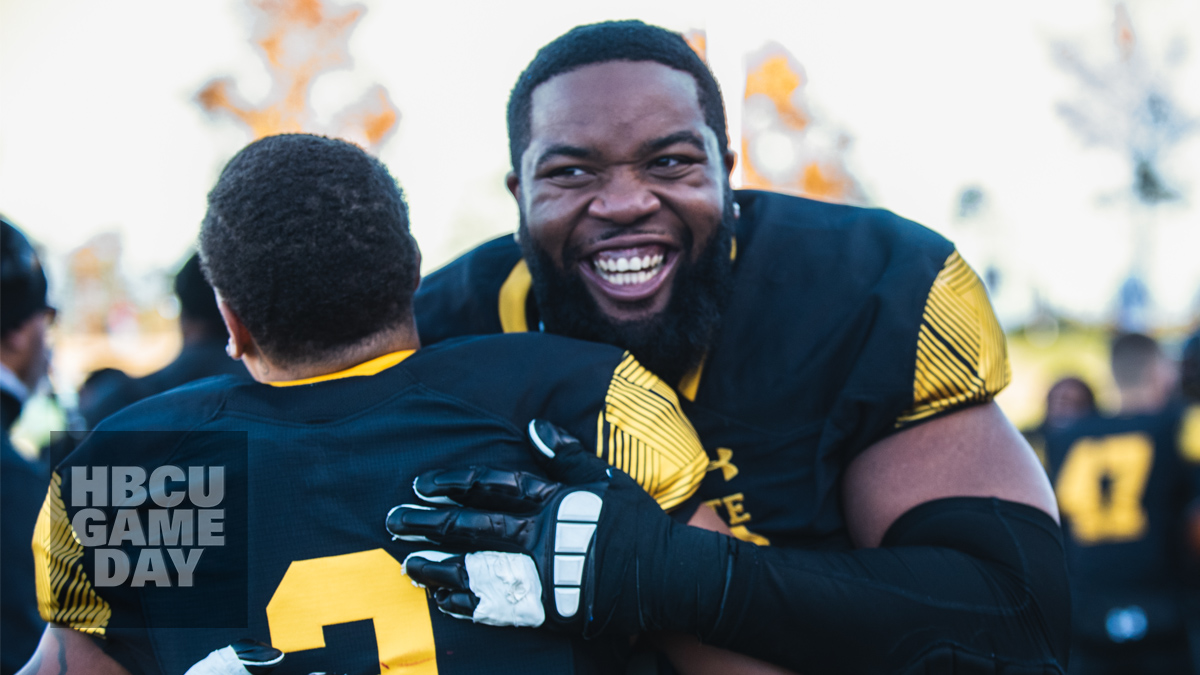 Bowie State advances to regional final with win over Newberry

Bowie State made school history by winning its second round game in the Division II football playoffs on Saturday.

BOWIE, MD – The crowd was on its feet, the cheerleaders were shaking as was the press box, as the CIAA champion Bowie State Bulldogs made history, pulling out a 13-10 home win in the last minutes over South Athletic Conference champion Newberry in an exciting NCAA Div. II Super Region II semifinal at Bulldog Stadium.

Quarterback Ja’rome Johnson, returned from an injured right ankle in the third quarter, to throw two second-half touchdown passes, the last with just 1:33 to play allowing the Bulldogs (12-1) to advance to the regional final for the first time ever.

BSU, the second seed in the region, will play at region top seed Valdosta State next Saturday (Dec. 4), a 66-35 winner over No. 5 West Georgia in the other semifinal.

Johnson completed 15 of 31 passes for 244 yards and the two scores. Wide receiver Keshane Hinckley hauled in five passes for 132 yards and both touchdowns. BSU’s 1,000-yard rusher, Calil Wilkins, was held out the first quarter for disciplinary reasons, but led the ground attack with 53 yards on 12 carries.

“Today, we played a very good Newberry football team,” said victorious BSU head coach Damon Wilson. “They pretty much eliminated the running game for us, so we had to rely on Ja’rome (Johnson) and his arm, our defense and sound special teams to win the football game. Our guys showed their resliiancy today and I’m glad to come away with the W.”

Johnson, who Wilson said spent the last two days in the emergency room with his newborn daughter and wasn’t at practice Friday, showed up Saturday morning ready to play.

“This shows the kind of character he has,” Wilson said. “This shows his determination and shows the type of team we are. The guys rallied around that. The thing he did is unbelievable.”

Johnson said his ankle was hurt when he was caught underneath on a tackle. “I knew I was going back,” Johnson said.

While Johnson made the big plays on offense, the BSU defense was stellar all day. They held the Wolves to 214 total yards in the game, just 66 in the second half. The speedy Bulldog defenders limited 1,000-yard Newberry RB Mario Anderson to 79 yards in 19 carries after he had 50 on his first three carries of the game.

They registered four sacks for -36 yards and had six other tackles for loss. Myles Woolfolk, a grad defensive back, had four jarring tackles, including the hit that sent Anderson to the sideline, and a forced fumble. Jordan Ellison, the Bulldogs’ 6-1, 340-pound nose tackle had nine stops, all solos to tie for the team lead with linebacker Wesley Bowers.

Newberry and Bowie State played on near even terms for all of the first half and went into the break tied at 0-0. Early in the third quarter, Johnson’s ankle was rolled on a hard tackle tackle by Newberry defensive lineman Ty Kely. He did not get up and had to be taken to the sideline. Back-up QB Larry Williams came in, and after a 2-yard Calil Wilkins run, Williams was hit and fumbled with Newberry recovering at the BSU 17. Five plays later, Anderson went in from the 2. The PAT put the Wolves up 7-0 with 8:11 left in the third quarter.

After getting his ankle spatted (taped on the outside), Johnson returned for a series that ended in a punt. Bowie State held and got the ball back at its own 19 after a Newberry punt. Facing a 3rd-and-22 at its own 38, Johnson launched a pass deep down the right sideline that Hinckley hauled in at the Newberry 22, then dodged his way through three defenders to score on the 68-yard pass play. Alen Omerhodzic’s PAT tied the score at 7 with 2:45 left in the period.

It stayed that way until deep in the fourth period. Omerhodzic had been good on a 37-yard field goal early in the period only to have it wiped out on a false start penalty. His attempt from the 42 sailed wide left with 13:29 to play.

The teams exchanged two punts before Newberry started a drive at its own 44 and covered 25 yards in eight plays before Ray Cotton kicked thru a season-long 48-yard field goal. His kick put the Wolves up 10-7 with just 2:50 left.

BSU got the ball at its own 42 after a 42-yard kickoff return from Kwincy Hall. On second down from there, Johnson threw deep down the left sideline that Hall caught between two defenders. The play covered 52 yards and carried to the Newberry 6. Two plays later, Johnson hit Hinckley with a 10-yard strike in the right flat for the game winner. Omehodzic missed the PAT.

On the third play of its final possession, Newberry QB Dre Harris fumbled with BSU recovering with 1:08 left. The Bulldogs were able from there to run out the clock.

Harris finished 12 of 27 for 84 yards against the stingy BSU defense. Bryson Woodruff led the NU receivers with three catches for 35 yards.

In the first half tie, neither team had any serious scoring threat. The closest either came to paydirt was on Newberry’s possession that opened the game. The Wolves rode the running of halfback Anderson, who tallied 50 yards on just three carries before being Injured on an 18-yard run down to the Bowie State 33. From there, the drive stalled. Anderson returned but only gained eight yards on five other first-half carries.

After its initial drive, Newberry only gained another 46 yards, finishing the half with 148 yards and 12 first downs.

Bowie was able to put up just 67 yards in the half and only four first downs. Wilkins came in and rushed for 26 yards on four carries. Johnson was 6 of 13 for 33 yards.

Bowie State advances to regional final with win over Newberry