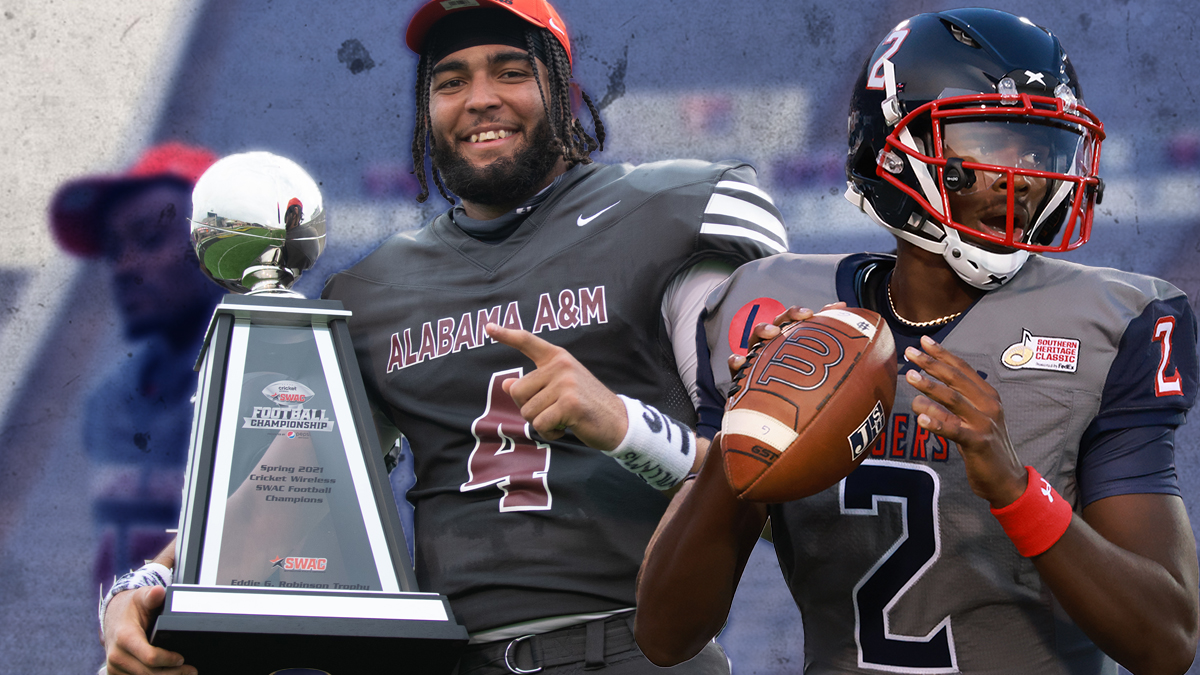 There is little time left in the 2021 season but there are so many questions that remain.

As the chill of November sets firmly into the 2021 season, the HBCU Gameday and Protect Your Skull player of the year race is heating up. Each season the two organizations award an offensive and defensive player of the year award for DI and DII football.

This current season was very unique because of the many unknowns at the onset. The truncated SWAC spring schedule was the only sample size we had to offer any prognostication. So we chose not to and simply watched the season play out. There is no list of finalists, there is only data that is still evolving.

While many teams have been eliminated from post season possibilities, it is cheek squeezing time for a handful of teams pursuing championships. What is accomplished on the field with the possibility of elimination on the line and the HBCU world watching carries a bit more cache.

Aqeel Glass at Alabama A&M is an obvious frontrunner for DI Offensive Player of the Year. The Bulldogs quarterback was one of the few players heading into a question mark season that you could hitch your proverbial wagon to. He’s the only quarterback to have thrown for over 3,000 SWAC yards this year along with 30 touchdowns. But his season and career will end at the conclusion of the regular season.

Shedeur Sanders from Jackson State, Prairie View’s Jawon Pass and Felix Harper from Alcorn State could all potentially have huge games in the SWAC Championship and the Celebration Bowl. Sanders may have the best opportunity to make a stronger case than Glass because of his efficiency. Sanders is completing a conference high 68 percent of his passes with an efficiency rating of 160.6.

But again the quarterback of a SWAC Champion and a Celebration Bowl winner is the prototype of what a champion looks like. There’s a lot of time remaining before any of that happens and there’s a whole separate conference in the running as well. Juwan Carter from Norfolk State has the stats to match a top five quarterback in the SWAC, but a recent losing streak has sunk the Spartan’s chance of competing for a national championship.

Winning a title isn’t a prerequisite for winning the Protect Your Skull player of the year award but it provides more data points for how a player performs under pressure. What’s more valuable than that?

Which defender creates the most havoc coming off the edge? Could it be FAMU’s Isaiah Land, James Houston from Jackson State, De’Shaan Dixon from Norfolk State, Jordan Lewis from Southern. Land leads all of FCS football with 17 sacks and may build upon that in the weeks to come. A dominant performance in the Florida Classic along with a potential spot in the NCAA Playoffs could cast his legend into permanency. How would that counter with a multi-sack game by Houston who is third in sacks in FCS football. Coupled with another fumble return for a touchdown and the raw numbers suddenly have nuance.

“We feel that this year’s awards are so impactful and significant because of the adversity and challenges that these great student athletes, coaches, and universities have had to face.  The athletes are not only being recognized for their great exploits and performances on the the field. Most importantly the Protect Your Skull and HBCU Gameday Player of the Year awards will acknowledge the great character, integrity, leadership, work ethic, discipline, and tenacity that these tremendous student athletes represent in their communities on and off the field,” said Protect Your Skull co-founder Foster Wilkins.

This weekend Albany State and Bowie State will begin the quest for a national championship in DII football. Stephan Pierre has more than made his case for defensive player of the year. The ASU linebacker has already won SIAC overall MVP and defensive player of the year. How will our voters rate Ja’Rome Johnson, a dual threat quarterback for Bowie State. He was fifth in passing in the CIAA but also a top 20 rusher in the league. Brett Sylve was a monster running back in Kentucky State’s triple option machine. Calil Wilkins was the only 100 yard rusher in the CIAA for Bowie State. Dionte Bonneau, like Johnson is just the fifth leading passer in the SIAC. But also like Johnson he’s the championship quarterback in the conference. What would a couple of wins in the NCAA playoffs do for his 2021 legacy?

The meaning behind the brand

“We have learned so many great lessons about the importance of mental health and quality of life over the past 21 months during the COVID-19 pandemic. Student athletes have been impacted greatly in these areas of concern. Our goal is to continue to make concussion awareness, player safety, and mental health initiatives a top priority in sports culture as it greatly impacts the lives of all athletes and there families,” said Protect Your Skull co-founders Tracey Suggs.

This late in the season we still have just as many questions as we do answers. But one thing is absolute. This December HBCU Gameday along with Protect Your Skull, will honor our 2021 players of the year. No question about it.