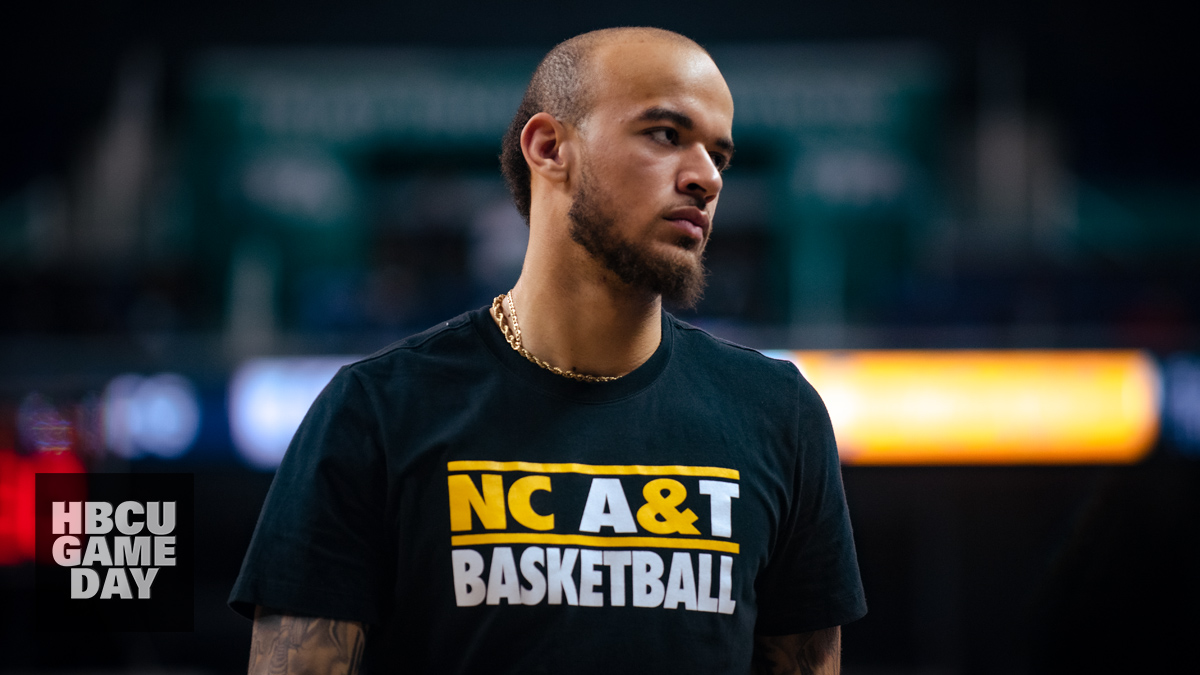 North Carolina A&T’s Duncan Powell is not only a highly-anticipated prospect. He’s also a budding businessman all while being a freshman.

GREENSBORO, NC —Nearly one year to the day that he became the highest-ranked commit in North Carolina A&T history, Duncan Powell sits on the sidelines watching his team play without him.

Sitting on the bench with a black A&T shirt, Air Jordan XIs (Concord version) and trademark “shag” haircut, the 6’8 wing from Dallas shouts out encouragement as his teammates as they battle cross crosstown rival UNC Greensboro.

The Aggies could have used him for sure, as they squandered a lead to open the season with a loss. Powell didn’t get to suit up on Tuesday, as he is in post-injury protocol. But even from the sideline, the highly-regarded recruit is soaking up the game.

“It was a great learning experience,” he told HBCU Gameday after the game. “This is our first time playing in front of this much people in like a year and a half two years. So just getting that knowledge under our belt and getting the jitters out.”

Powell made headlines last November when he committed to A&T. Rated as a four-star prospect by ESPN, he initially committed to Arkansas as a sophomore before re-opening his recruitment, much to the delight of A&T head coach Will Jones.

“Duncan is as advertised,” Jones told HBCU Gameday at Big South Media Day. “He’s legit sized. He’s got the skill level. He’s been unbelievable as a teammate so far. He’s been doing what he needs to do in the classroom.”

Not long after he arrived at the East Greensboro campus, Powell made more headlines by being among the first athletes to capitalize on his Name, Image and Likeness. He signed to represent a clothing brand and then started his own — Shagland Clothing. And that’s just the tip of the iceberg.

“Duncan has had — from the HBCU side alone — the people that reach out to him from apparel, from different businesses that just want to partner with him is big-time,” Jones said.

It can be a lot for a young man to handle, even one as enterprising as Duncan Powell. To that end, he’s now being represented by TLS Sports who will help him navigate the business side of college basketball.

“I’ve built a great relationship with them. You know, we’re going to take advantage of me being, you know, in the in the most humble way — being with the highest recruits to ever come to an HBCU, especially like NCAT,” Powell said. “We’re going to use that to the maximum. You know, I’m a college athlete. I need money just like anybody else, I need money. So they’re going to help me with that and help me with my name, image and likeness, things like that.”

“We are excited to welcome Duncan to the TLS Family,” said TLS Sports CEO, Cicero Leak. “We’re going to build out his national profile and take big swings, and help pave the way for other NIL athletes that attend HBCU’s.”

The 19-year-old is now balancing all of this while adjusting to the rigors of college — on and off the court. He says the time management aspect has been an adjustment.

“High school you wake up, it’s 7 AM, your day’s kind of planned out for you,” Powell said. “Just school, and at the end of the day we had basketball. But with college, it’s morning weights, then class, then practice, then class, then study hall in practice.”

Powell says the veterans on the team — Kam Langley, Justin Whatley and David Beatty as well as others — have helped him keep pace.

Powell is also soaking up the culture at A&T and in North Carolina. Between his tall frame and his trademark haircut, it’s pretty easy for him to stand out in a crowd. But he appears to be enjoying fitting in on campus as well as being in basketball-crazed North Carolina.

“Being around my people, you know, being around the environment, a basketball environment,” Duncan says when asked what he’s enjoyed the most about in college. I’m from Texas you know a football state coming to the hoop state — this is a great experience experience in the new culture and I’m really being a part of.”