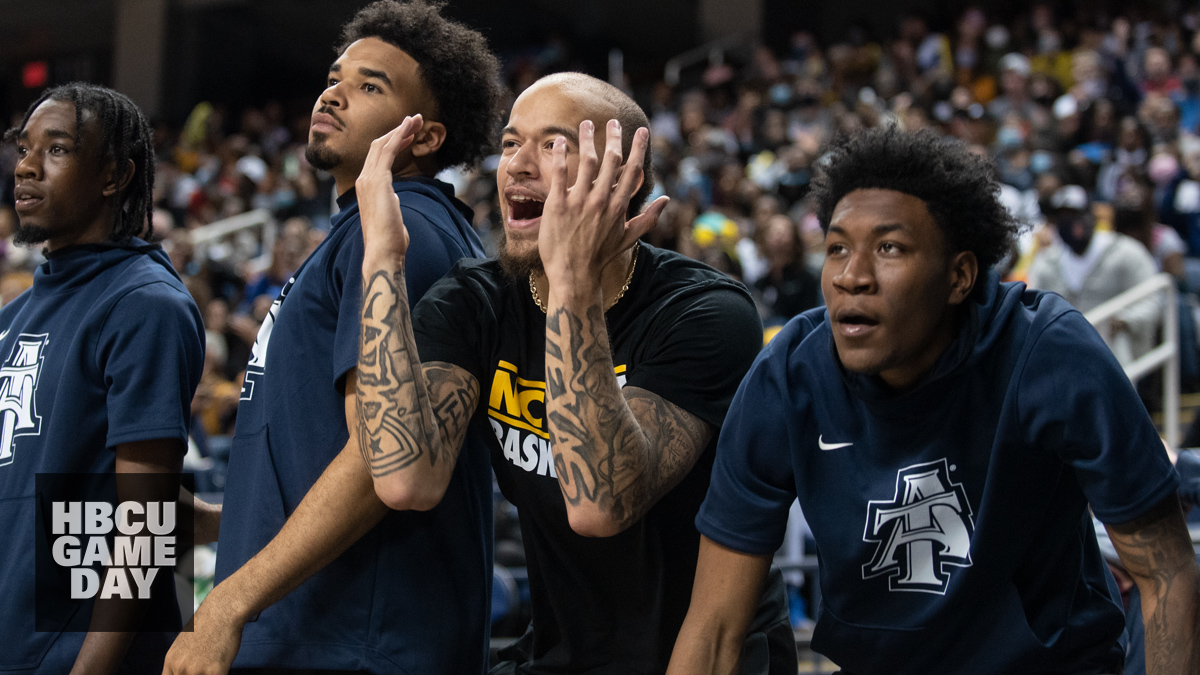 North Carolina A&T opened the first season of its new chapter with cross-town rival UNCG. It almost went home with a win, but came up short down the stretch.

The season-opening match up between Greensboro N. C. neighbors N. C. A&T and UNC-Greensboro hoped to deliver everything you’d want to see in a crosstown basketball rivalry – intrigue, suspense and a close game.

That’s exactly what a packed house at Greensboro’ Coliseum got Tuesday night.

From the local Langley brothers – NC A&T’s Kam and UNC-G’s Kobe  – to the Jones boys – UNC-G head coach Mike Jones and NC A&T’s Will Jones with similar HBCU coaching roots, the game lived up to the billing.

The Spartans under new head coach Mike Jones, fought back from a 10-point second-half deficit and used clutch 3-point baskets from grad transfer De’Monte Buckinghamn to pull out a 57-53 nail-biter.

Buckingham, a Cal-State Bakersfield transfer and former A-10 freshman of the year at Richmond, sank a three from behind the arc with 2:49 left to give the Spartans their first second-half lead at 51-49. A half-minute later, he threw in another trey to put his team up 54-50.

NC A&T’s Marcus Watson hit a three to pull the Aggies to within 54-53 with :33 seconds left but that was close as the Aggies would get. The Spartans converted four of five free throws over the final minute as the Aggies were forced to foul.

“We had control of the game for about 30 minutes, and then the last ten we took some tough shots and stopped sharing the ball,” said Will Jones of his team giving up the second-half lead. “They dominated us on the glass (a 51-34 UNC-G advantage) and we didn’t make our free throws (13 of 22 from the line).

“So they were able to get the momentum in their gym and come out with the victory.”

“We shot the ball bad,” Jones said. “And we’re a really good shooting team. We hit two or three more 3s in this game and I think we win the game. But the ball didn’t go in tonight.”

Both programs are embarking on new territory. NC A&T, in the fourth year under Will Jones, is playing its first year in the Big South Conference after a half-century in the MEAC. Mike Jones is replacing former UNC-G darling Wes Miller who moved on to Cincinnati after ten years leading the Spartans.

The two coaches and their teams staged a barn-burner of an opener on the home floor of the Spartans.

The teams see-sawed through five ties and eight lead changes in the first half before the Aggies scored the last three points to go into the break with a 31-28 lead. Maye, a senior and deft shooter, came off the bench to score on an array of pull-up jumpers in the lane and led the Aggies with 14 first-half points. He was six-for-six from the floor. Buckingham was equally hot. The 6-4 guard scored the first 12 points for UNC-G and finished the half with 18 points including canning 3 of 5 from behind the arc. Maye and Buckingham were the only double-figure scorers in the half.

The Aggies stormed out of halftime, scoring the first seven points, five by Watson to move out to a 38-28 lead with 17:47 left. The last basket came on an alley-oop dunk by Watson off a feed from Kam Langley.

But the Spartans fought back, going on a 17-8 run to pull within 46-45 on back-to-back inside baskets by center Bas Leyte, the last with 7:55 left. The Aggies kept the lead until Buckingham staged his late-game heroics.

“This is the happiest I’ve been in seven months,” said a relieved Mike Jones of the time since he last hit the court as the head coach at Radford. “It’s a long journey, a marathon, not a sprint. That’s one win in the books.”

NC A&T is in Florida for games at Jacksonville Saturday (Nov. 13) and South Florida Monday (Nov. 15). UNC-G plays on the road Friday at Northern Kentucky.