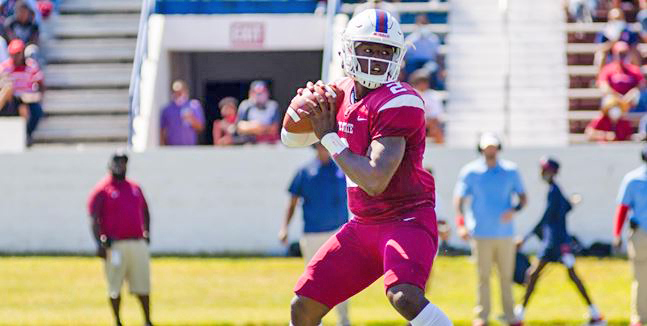 On homecoming Saturday, the MEAC favorite Bulldogs of SC State had plenty to celebrate.

Shell, who was part of the 2020 HOF class, has joined former Bulldogs Harry Carson, David “Deacon” Jones and Marion Motley in the Hall.

At 1:30 p.m., Shell, Jeffries, SCSU Head Coach Buddy Pough and others were amongst the guests at the Mid Eastern Athletic Conference’s debut of its new pre-game show, Countdown to Kickoff. The stage was set up just outside SCSU’s Oliver Dawson Stadium with veteran broadcaster Charlie Neal and Nicole Hutchinson as hosts.

When the game kicked off at 3:30 pm in front of a homecoming crowd of 11,00, the Bulldogs showed why they are considered the favorite to represent the conference in the season-ending Celebration Bowl.

In their MEAC opener, the Bulldogs’ defense picked off Morgan State QB Neil Boudreau three times and the Bears lost two fumbles in a 37-14 SCSU win. SCSU QB Corey Fields Jr. (19-44-2) threw for 258 yards and three TDs in the win.

The Bulldogs (2-4, 1-0 MEAC) scored in the first quarter on an 18-yard TD pass from Fields to Will Vereen. In the second quarter, DB Zafir Kelly, who had two interceptions in the game, returned a 20-yard field goal attempt blocked by Patrick Godbolt, 90 yards to paydirt.

After MSU RB Alfonzo Graham (7 carries, 74 yards) put the Bears on the board with a 40-yard scoring run, SCSU WR Shaq Davis turned a hitch pattern into a 54-yard TD pass. The score put the Bulldogs up 21-7 at the break.

Morgan State pulled within 21-14 when Boudreau hit Devon Mondy with a 32-yard scoring pass with 10:35 to go in the third period. Fields came back to hit Richard Bailey on a 31-yard TD pass and Gavyn Zimmerman hit on a 26-yard field goal to send the Bulldogs into the final quarter up 31-14.

The Bulldogs capped the scoring when Jablonski Green picked off Boudreau and scored on a 7-yard return midway thru the final stanza.