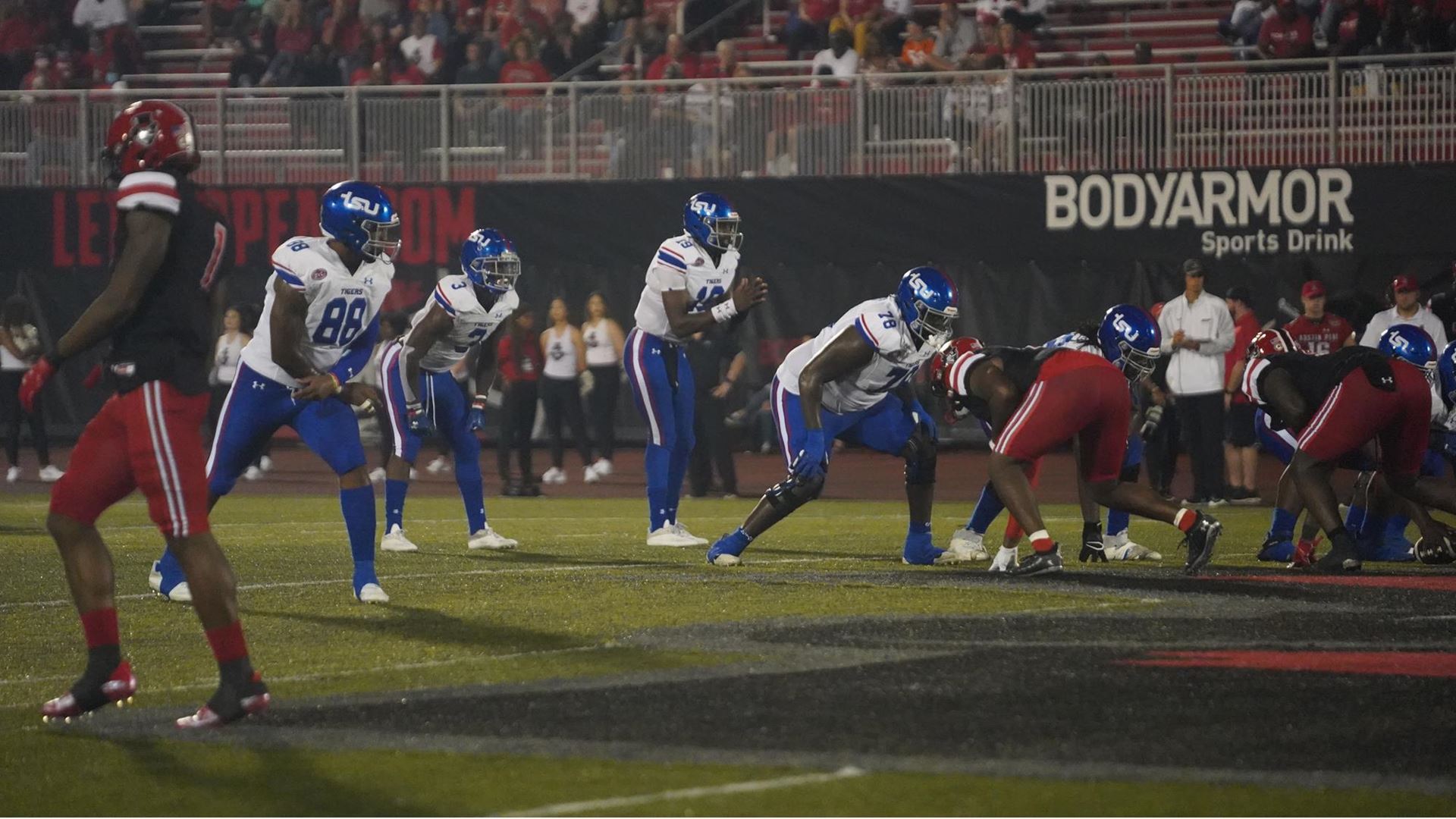 Tennessee State football has done something in Eddie George’s short tenure that it hasn’t done in five years.

After a slow start, Tennessee State is heating up under new head coach Eddie George.

TSU forced Tennessee Tech into an overtime game and came out with a 20-13 win over its OVC rival. It was the first time in five years that the Tigers have won back-to-back games.

“That’s who we are. That’s who I am,” George said. “I’m going to work to make sure this team is ready every week. It’s developing that championship mentality that we have to have around here. The energy in that locker room right now, the belief just went out the ceiling. It was a gutty win. I am glad our boys fought to get the victory.”

The defense for both teams played stellar in the first quarter. In their first offensive series, Tech gambled on a fourth and one from their 38-yard line but TSU safety Josh Green stopped Tech running back John Gist for no gain. On the ensuing drive, TSU drove the ball down the Tech one-yard line. On third down, Tiger running back Jalen Rouse fumbled. Tech’s Devin Squires recovered it at his two-yard line.

“We have to start faster on offense,” said George. “We had a chance to put points on the board and we fumbled on the goal. We go down first and goal and jump offsides and kick a field goal. I give a lot of credit to Tennessee Tech. They came with a great game plan. There were times that we just didn’t execute.”

Tech took over and put on an impressive drive, riding Gist on seven of nine plays that took them deep into Tennessee State territory. The quarter ended with Tech on a five-yard loss by Gist to make it third and 10.

After the scoreless first quarter, the Tigers stopped Tech on a third and 10 at their 24-yard line. A false start on fourth down made the field goal attempt a little longer but Tech took the lead on a 42-yard field goal by Hayden Olsen on the second play of the quarter. The 7:02 scoring drive covered 72 yards on seven plays.

On the kickoff following the field goal, sophomore Darryon “Fatcat” Johnson’s 47-yard return put the Tigers in great field position at the Tech 38-yard line. A pass interference by Tech’s Josh Reliford and a 24-yard run by Starling put the Tigers at the Tech four-yard line. The drive stalled, but Tiger kicker Antonio Zita tied the score at three on a 25-yard field goal. The drive took six plays for 31 yards, and it covered 2:16.

After forcing a Tech punt, the Tigers had a promising drive that stalled on a fumble by Tiger quarterback Geremy Hickbottom.  Tech’s Xavier Washington recovered the ball at his 32-yard line. During the drive, TSU was called for two penalties. The biggest one was after Hickbottom hit Vincent Perry for a first down. It was called back on an illegal “hands to the face” penalty on TSU’s Zaire Thornton.

On the ensuing drive, Tech held the ball to the final seconds of the half, converting on a 31-yard goal by Olsen. Tech took a 6-3 lead into the locker room.

Tech received the second-half kickoff and drove the ball inside Tennessee State territory. The drive stalled, and TSU took over on their 11-yard line. The Tigers moved the ball to their 35-yard line and on second and eight. Hickbottom was injured on a sack by Tech’s Chris Tucker. The drive stalled and both defenses finished the quarter pitching shutouts.

The fourth quarter started with Tech going for it again on fourth and two on the Tiger 29-yard line. Tech quarterback Willie Miller was stopped for a one-yard loss giving the Tigers the ball back on their 30-yard line. TSU struck fast, starting their two-play touchdown drive with Hickbottom dumping a pass to Starling for a 14-yard gain to their 44-yard line. Hickbottom then rolled to his right and threw a pass to his left to tight end Rodell Rohmann who took it 56 yards for his sixth receiving touchdown of the season. The big stop on fourth down seemed to give the offense the lift they needed to get in the end zone.

“I have a lot of trust in my defense,” said Rohmann. “We know that they are going to handle their stuff and play their hearts out every game. Having the defense that we have, having the players making the plays out there, creates a nice little cushion. I have confidence in them.”

Tech answered with a 75-yard drive in 13 plays for a touchdown, culminated by a Moore pass to Jamal Dean for 10 yards on third and goal. It was Dean’s first career TD. Olsen’s extra point made it 13-10 with 8:21 left in regulation.

After both teams’ drives stalled, the Tigers took over at their 13-yard line with 3:27 to go in regulation. Hickbottom and Rohmann connected on a 37-yard seam route to get the drive started. A Hickbottom to Josh Trueheart pass on third and five for six yards kept the drive alive. Then Hickbottom connected with Johnson for six yards on third and three to get the ball to the Tech 26-yard line. Starling then rushed for 13 yards and the Tigers were in the red zone.

On third and three at the Tech six-yard line, Hickbottom had one on one coverage on his favorite target Rohmann, but it was broken up by Tech’s Cameron Hudson. After a Tech timeout, Zita tied the score on a 24-yard field goal with five seconds left.

Tech won the toss and elected to go on defense. It only took the Tigers two plays to make it to paydirt. After Hickbottom connected with Starling on a 12-yard pass, he then hit Johnson on a swing pass to the left flat and he did the rest scoring on a 13-yard pass play. Zita’s extra point made the score 20-13, TSU.

TSU’s defense then took the field with a chance to get the victory. The energy on the Tiger sideline was ramped up, giving the defense the lift that they needed. After a Gist run made it first and goal for Tech, the Tennessee State defense rallied and was able to force a fourth and goal at their four-yard line. A false start penalty by Tech’s Cory Huff backed the ball up to the nine-yard line. The game ended when TSU safety Cory Rahman picked off a Miller pass, setting off a wild celebration. The false start allowed the Tigers to concentrate on the last play being a pass.

“Obviously the play changed after the false start,” said Rahman. “They could have easily done some RPO, QB run stuff, which they were pretty successful during the game doing that. We kind of prepared for that then changed the call. They were running the crossers and it was just a matter of time. Just for it (the interception) to happen at that moment was pretty special.”

Tennessee State improbed its record to 3-3 on the season and 1-1 in OVC play. They will now get back to work and travel to Eastern Illinois for a 2 p.m. kickoff on October 23.

“I am really so proud of our guys for fighting through adversity, finding ways to win games like that,” George said. “We did not play our best. We kept our composure and found a way to win the game.”