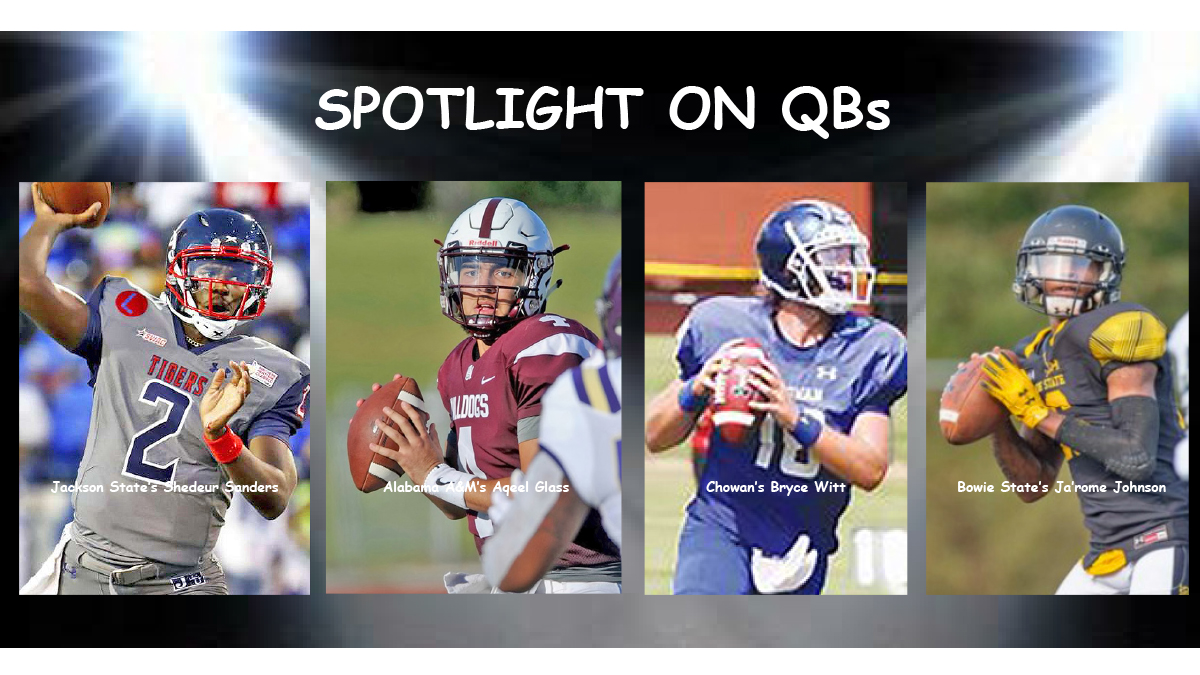 The season heats up in Week 6 as showdowns loom involving top teams in the SWAC East (Jackson State vs. Alabama A&M), CIAA North (Bowie State vs. Chowan) and CIAA South (Fayetteville State vs. Shaw). October is also homecoming season and 12 are on tap this week.

The HBCU Football Rundown gets hotter as the season progresses. That is how it should be as we hit Week 6, the halfway point of the 2021 season.

Regardless, neither Grambling nor Chowan gets to rest on its laurels as each has games with potential championship implications in their conferences this week. But they’re not alone.

The heat is on as the SWAC East and CIAA North and South Divisions have critical early October No. 1 vs. No. 2 showdowns that could all but determine those titles!

Perhaps Chowan (5-0, 2-0 CIAA N) should have saved some of those 73 points (vs. WSSU) for two-time defending division and conference champion Bowie State. The Bulldogs (4-1, 2-0 N) travel to Murfreesboro, N. C. Saturday (1 p.m. on the CIAA Network) looking to slow or halt the Indians as the league begins its five-week closeout of intra-division games.

Chowan has challenged Bowie State in the CIAA North before, particularly in 2018. CU handed BSU a 42-23 loss that year when now senior quarterback Bryce Witt was a sophomore. Witt threw for 252 yards and two TDs without an interception in that win.

In 2019, BSU administered a 64-17 whipping on the Indians as Witt was held to 136 passing yards and threw three picks without a touchdown.  Both teams sat out the 2020 fall and 2021 spring seasons as did the rest of the CIAA because of the COVID-19 pandemic. The big question is how the teams will match up Saturday.

Witt has been on a roll and is the league’s standout offensive player so far this season. Through five games, he has passed for 1,573 yards (314.6 ypg. 9th in Div. II) and 20 touchdowns with just three interceptions. He has completed 68.4% of his passes (115 of 168) and has rushed for a team-best eight touchdowns.

The real battle however will be between the Chowan offense that is averaging 51.4 points per game, best in the nation, and the Bowie State defense that is surrendering just 14.2 ppg., 10th in Div. II. Defensive back Demetri Morsell, the league’s 2019 defensive player of the year and the 2021 preseason DPOY, and lineman Joshua Pryor lead the BSU defense. The BSU defense will be a real challenge for Witt and the Chowan offense. Something’s got to give here.

In the latest AFCA NCAA Div. II poll, Bowie State is tied for 16th while Chowan moved into the poll for the first time ever at 24th.

Another game to keep an eye on in the CIAA North is Elizabeth City State (2-3, 2-0 N) travelling to Petersburg, Va. Saturday evening (7 p.m. ET) to face Virginia State (1-3, 1-1 N). Anthony Jones’ ECSU Vikings have followed up three losses to open the season with back-to-back wins in conference play over Winston-Salem State and Livingstone. Jones and the Vikes will be looking to join the quartet of recent N. Div. contenders that has included BSU, Chowan, VSU and Virginia Union. Reggie Barlow’s VSU Trojans will be trying to keep them out.

The other four teams in the CIAA South – Livingstone, J. C. Smith, St. Augustine’s and Winston-Salem State – are winless meaning Adrian Jones’ Bears of Shaw (3-2, 2-0 S) appear to be the only real challenger to Richard Hayes’ FSU Broncos (3-1, 2-0 S).

Based on what others in the CIAA South have done – or not done – so far this season, this showdown could be for the division championship and a spot in the Nov. 13 CIAA title game.

Grambling State got its first SWAC win Saturday behind the play of freshman quarterback Noah Bodden (16 of 34, 191 yds., 3 TDs). An opportunistic defense picked off Alabama A&M’s SWAC Player of the Year, QB Aqeel Glass, four times and returned a Glass fumble for a TD.

Alcorn State, who was idle this past weekend, is coming off a big come-from-behind 39-38 win over Arkansas-Pine Bluff two weeks ago. Alcorn QB Felix Harper threw for 368 yards and three TDs vs. UAPB. The Braves also got their running game going as Niko Duffey rushed for 144 yards and two scores.

Both are chasing SWAC West Division leader Prairie View A&M (4-1, 3-0 W) who is idle this week.

All eyes will be on Huntsville, Alabama to see if JSU – who already owns a 7-6 season-opening win over top division contender Florida A&M – can take a key step in snatching the E. Div. title from the Bulldogs. A&M defeated JSU 52-43 en route to winning the E. Div. and SWAC titles in the spring in Sanders’ first campaign.

This will also be the Sanders’s chance to prove that their squad is the team to beat in the division and conference. This should be a good one!