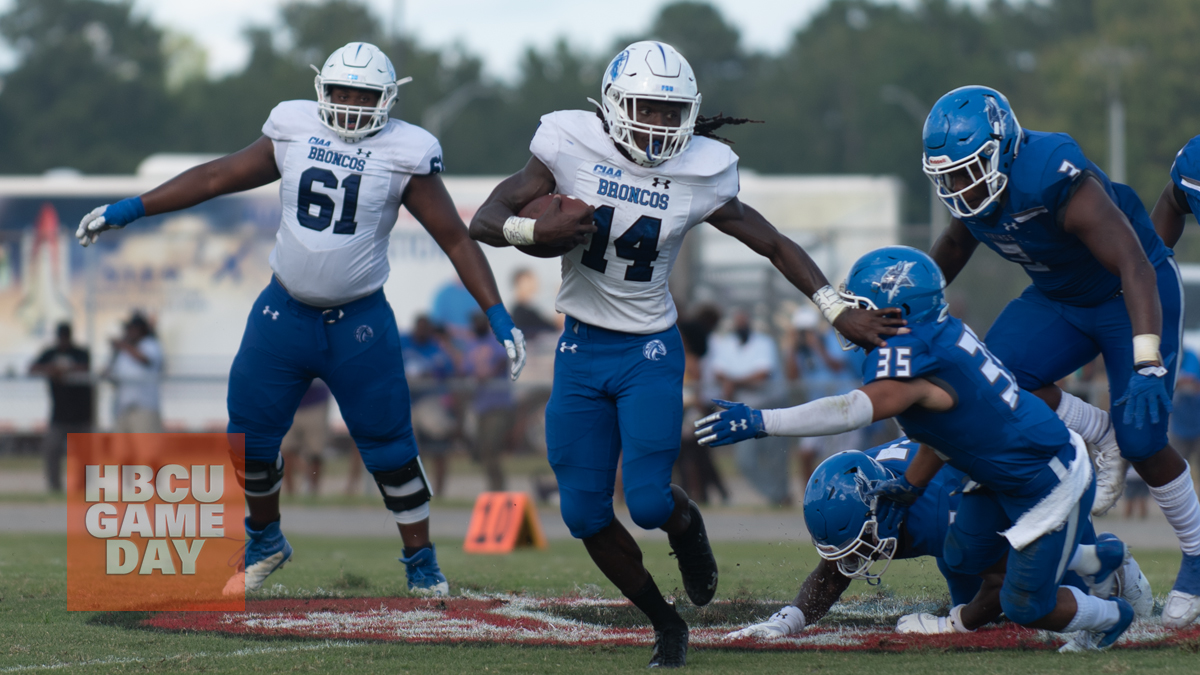 The CIAA football season has reached its mid-point. We take a look at the pretenders, the contenders and those playing for pride.

Lincoln (0-2 in conference, 0-5 overall): Chances of winning = in the basement.  The Lions haven’t gotten remotely close to winning a championship since they joined Division II.  The Lions need cub steps, like win more than one game in a season before we can meaningfully put “Lincoln” and “championship” in the same sentence.  I think we all have a better chance of winning the lottery than Lincoln winning a championship this year.

St. Augustine’s (0-2, 0-3): They were closer to a championship in 2019 than they are today.  This flock is struggling to fly, much less go high.  Their championship would be beating Shaw on the field the two teams share, and that’s a tall order on its own.

JC Smith (0-2, 0-4): Their championship drought is a long one, and just add another year for the Golden Bulls.  But, winning against Winston-Salem and Livingstone in the same year would give the same high as a championship, and that outcome is a possibility for the first time in forever.

Livingstone (0-2, 0-5): LC’s championship chances haven’t been alive for two decades, and this season isn’t any different. Don’t let the record fool you though, as the Blue Bears are proving to be a tough out. Livingstone as a spoiler would give the the program a big boost.

Winston-Salem State (0-2, 0-4): No team that loses 73-7 to a conference opponent should even be in the championship conversation.  End of story.

Virginia State (1-1, 1-3): The Trojans are an army that has some ammunition shortages to go to war with the top schools in the conference.  We saw South leader Fayetteville State plunder them, and two other schools with better records at this point loom to raid their end zones for points.

Virginia Union (1-1, 2-3): The black cats from the capital city do not have the claws from prior years, and they could not get over the hump then.  Expect more noise than scratches on the scoreboard in divisional play.

Elizabeth City State (2-0, 2-3): The Vikings played well in the kiddie pool, but now are sailing into deeper waters in the North.  Expect the ship to take on too much water to make it to championship island.

Fayetteville State (2-0, 3-1): The Broncos are bear hunting this week, and we have seen how this plays out.  A successful outing against Shaw puts FSU in the driver seat with potentially not much resistance by the other four South teams.  Saddle up, as things look promising to reach the championship for the four consecutive time.

Shaw (2-0, 3-2): The Bears are out to corral Fayetteville State for the first time in a long time.  This game has likely been circled on Shaw’s calendar for some time.  A Bears win means wrestling long time control of the South from the Broncos, as two rivalry games to finish the season just don’t have the same panache from prior seasons.  This season represents their best odds to reach the championship game since 2010.

Chowan (2-0, 5-0): Things look good for the Hawks to get to the championship game provided that they can get past the conference’s current kings in Bowie State this weekend.  This group has been like FedEx in that they have been serving overnight deliveries to the endzone all season.  Odds look good.

Bowie State (2-0, 4-1): The reigning conference champion remains in control so far, but challengers are all preparing their best shot.  The first one comes at them this Saturday, and it looks like a full strength effort too.  Hold here, and the odds look very good.