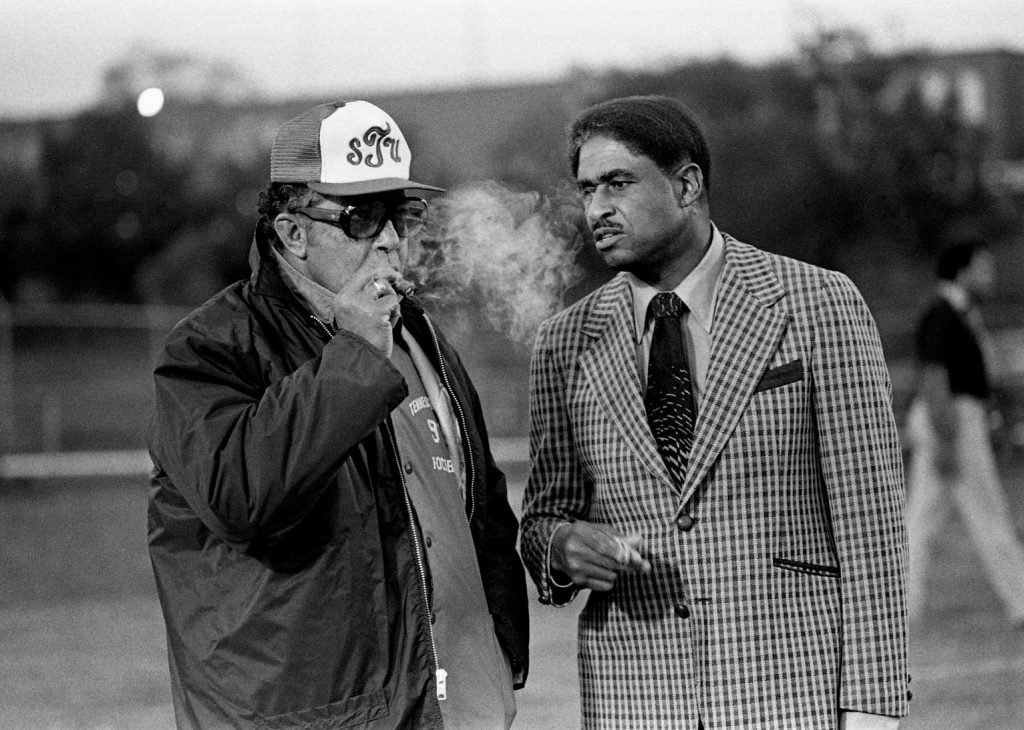 Black college football has a rich legacy. Tennessee State and Grambling State are two of the biggest reasons why.

GRAMBLING, La. | In the heyday of Black College Football, they were the kings of the Historically Black College and Universities gridiron greats — Grambling State and Tennessee State.

The two schools rank one and two, respectively, in number of all-time HBCU national championships with Tennessee State claiming 16 titles and Grambling State capturing 15. The two programs also have sent the most former players on to play professional football, with more than 200 former G-Men taking the next step while Tennessee State has had 121 NFL draftees in its storied history.

And on Sunday, Grambling State and Tennessee State will meet again as the teams open the 2021 season by facing off in the Black College Hall of Fame Game at Tom Benson Stadium in Canton, Ohio.

Grambling has won the last five meetings and holds a 22-18-1 all-time lead over Tennessee State, winning 49-14 in the most recent matchup in 2002.

But the friendly rivalry/relationship between the schools goes back much farther than that.

During that Black College Football heyday — the 1960 into the 1970s — HBCUs were producing some of the top football players in the nation, players who early on in that timespan weren’t recruited or even considered by many if not most HBCUs.

The programs were led during that heyday by two of the most successful coaches in college football history.

Eddie Robinson took over the Grambling football program in 1941 and guided the Tigers to a 408-165-15 record over the next 57 seasons.

The coach known as “Big John” Merritt was head coach for Jackson State for 11 seasons, finishing with a record of 63-37-5 winning three conference championships, before taking over at Tennessee State in 1963 and serving as head coach there for the next 20 years. During that span, Merritt’s teams had no losing seasons. Merritt’s overall coaching record of 172-33-7 is highlighted by seven national championships.

Merritt’s biggest season arguably came in 1971, when his Tigers compiled a 9–1 record, defeated McNeese State in the Grantland Rice Bowl, and outscored all opponents by a total of 403 to 151. The team was also recognized as the 1971 Black College National Champion and was ranked No. 5 in the final 1971 NCAA College Division football rankings issued by the Associated Press and No. 14 in the final poll issued by United Press International.

But probably the biggest game between Grambling State and Tennessee State came in 1967, during both the heyday of Black College Football and the civil rights movement.

That’s because when the two teams squared off in Nashville, Tennessee, in October of 1967, much of the hoopla surrounding the contest was centered around the two quarterbacks of the teams and the question of whether or not they were destined to become the first Black starting quarterbacks in the NFL — Grambling’s James “Shack” Harris and Tennessee State’s Eldridge Dickey.

Heading into the showdown, Dickey was generally considered the more likely of the two to be able to truly break the NFL’s quarterbacking color line.

According to Pro-football-reference.com, history shows that Willie Thrower played one game at quarterback for the Bears in 1953, and a few other African-Americans are reported to have received a few snaps in pro football’s early days.

Eldridge has led Tennessee State to a 24-game unbeaten streak. Entering his senior year in 1967, Eldridge had already totaled 64 passing touchdowns, more than 4,700 yards passing, and a 68 percent completion percentage. It was said the 6-2, 190-pounder could throw the ball 60 yards with either hand and punt or kick farther than anyone on the TSU squad.

That was by Robinson’s design. Robinson believed that having Harris play in a pro-style passing offensive set, with the goal of making him the kind of classic drop-back passer who couldn’t be forced to change positions, could Harris reach that pinnacle as the first regularly Black starting quarterback in the NFL.

Against TSU that season, Robinson agreed to open up Grambling’s offense, and Harris responded by throwing for 264 yards and three touchdowns, the final one winning the game 26-24 with less than a minute remaining.

Dickey, on the other hand, was intercepted five times by the Grambling defense.

But Dickey did become a first-round draft choice of the Oakland Raiders in 1968, but despite reportedly outplaying another rookie, Ken Stabler from the University of Alabama, in the preseason, Dickey was turned into a flanker. His pro career ended after three years as he faded into obscurity.

And just as important, Harris had opened the door for future Grambling and NFL Doug Williams, who playing for Washington became the first black quarterback to win a Super Bowl in 1988, being named the game’s MVP in the process.

The next season Harris was drafted by the Buffalo Bills, but not until the eighth round.

Harris was waived after only three years with the Bills, but after joining the Los Angeles Rams in the mid-1970s, he achieved the goal he set along with Robinson by becoming not only the first Black quarterback to regularly start in the NFL, but also was chosen team captain. Harris twice guided the Rams to the conference title game and was the first black quarterback selected for the Pro Bowl (where he was MVP), while also leading the NFC in passing efficiency.

That was the end to Harris serving as a shining light for the NFL. After his playing career ended Harris parlayed his success into his work as Director of Pro Personnel for the Baltimore Ravens (1997-2003), helping guide the team to a Super Bowl victory, and then as Senior Personnel Executive for the Detroit Lions until his retirement in 2015.

And a big part of it all began with that Grambling vs. Tennessee State showdown in October of 1967.