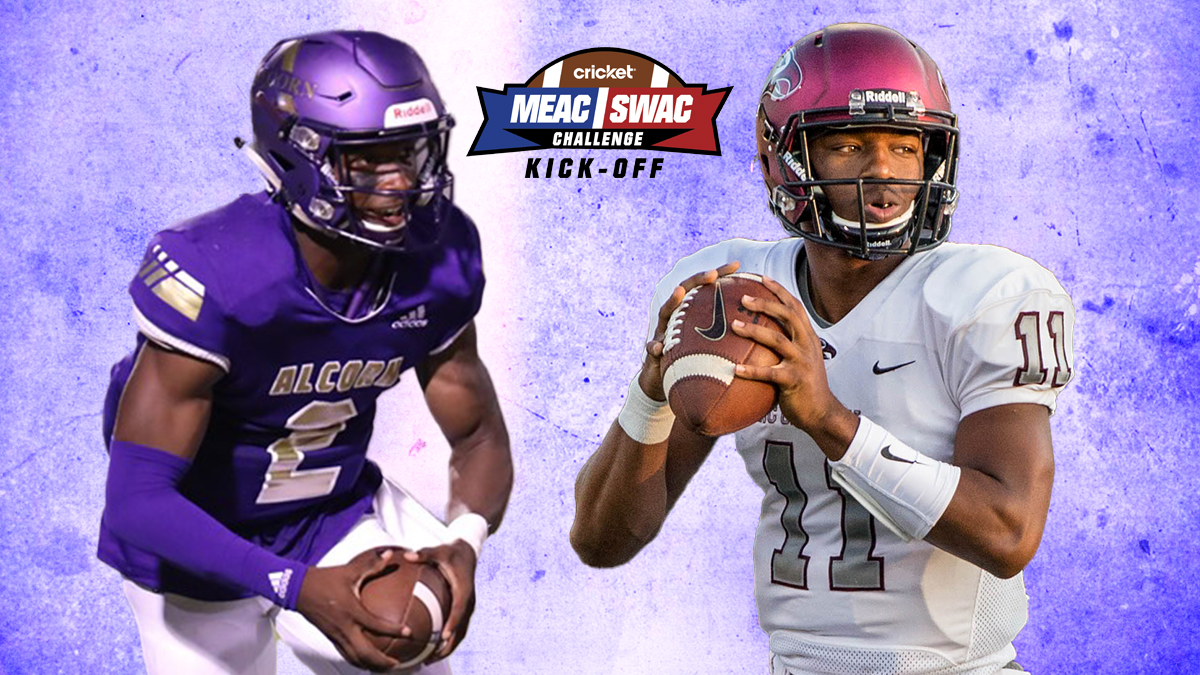 MEAC/SWAC Challenge: How To Watch, Odds

ESPN has rolled out the red carpet for the MEAC/SWAC Challenge. Here’s what you need to know about the game.

The MEAC/SWAC Challenge is back after a hiatus during the 2020 season. COVID-19 pushed both conferences to postpone their seasons to the spring, and both Alcorn State and North Carolina Central decided not to participate in the spring season this winter.

Here’s the basics of what you need to know:

This year’s event marks the 15th showcase contest between the two FCS HBCU Conferences and the MEAC holds a decided 10-4 edge. Both Alcorn State and NCCU are looking for their first-ever MEAC/SWAC Challenge wins. ASU led Bethune-Cookman 13-7 during the 2016 game when weather caused the game to be called off. NC Central found itself on the wrong end of a 40-24 game.

This will be the sixth meeting between the two programs, with Alcorn State winning all five previous matchups, which were held between 1970-76. Several of those games featured a standout offensive lineman named Dennis Thomas. He’s currently the MEAC’s commissioner.

Both programs are looking to return to the field after not suiting up since the 2019 season. Alcorn State went 9-4 that season, defending its SWAC title before losing to North Carolina A&T in the Celebration Bowl. It was predicted to finish first in the SWAC West after switching divisions.

North Carolina Central finished 4-8 overall in 2019, with its last game coming as a 54-0 pummeling by North Carolina A&T. NCCU was picked to finish third by the MEAC coaches and SIDs.

Atlanta has not been kind to either of these teams. Alcorn has been to the Celebration Bowl three times in the game’s short history, and it’s lost all three games. It also received a 41-0 beat down at the hands of Georgia Tech in 2018, but that was a money game against an ACC opponent.

North Carolina Central’s last game in Atlanta was the 2018 MEAC/SWAC Challenge. That game is one of four that is in the SWAC win category and not the MEAC. Prior to that, its previous appearance in The A was the 2016 Celebration Bowl. That game resulted in a heart-breaking 10-9 loss for NCCU with a dubious ending to add insult to injury. That is the only SWAC victory in the season-ending bowl game for both conferences.

Though both teams haven’t played in well over 18 months, the experience factor heavily favors Alcorn State. Head coach Fred McNair has been with his alma mater for nearly a decade, and ASU has consistently won during that tenure.

NC Central head coach Trei Oliver arrived at his alma mater less than three years ago hoping to re-build the ashes of a program still smoking from NCAA sanctions. The 2019 season was his first as head coach, and it was a rough one.

The experience factor also shows in the quarterback matchup. Felix Harper didn’t become the starter until a few games into the 2019 season, but he’s been around the program for years as a backup to Lenorris Footman and Noah Johnson, both of whom led ASU to SWAC titles and Celebration Bowl games. When he finally got his chance, he lit up the league and became the SWAC Offensive Player of The Year.

The game has always been owned and hosted by ESPN Events, however, they’ve kicked it up quite a bit this year. Good Morning America will be there on Friday. The College Gameday Crew will be anchored in Atlanta on Saturday morning. So will Migos. And, of course, so will the HBCU Gameday Crew.

MEAC/SWAC Challenge: How To Watch, Odds