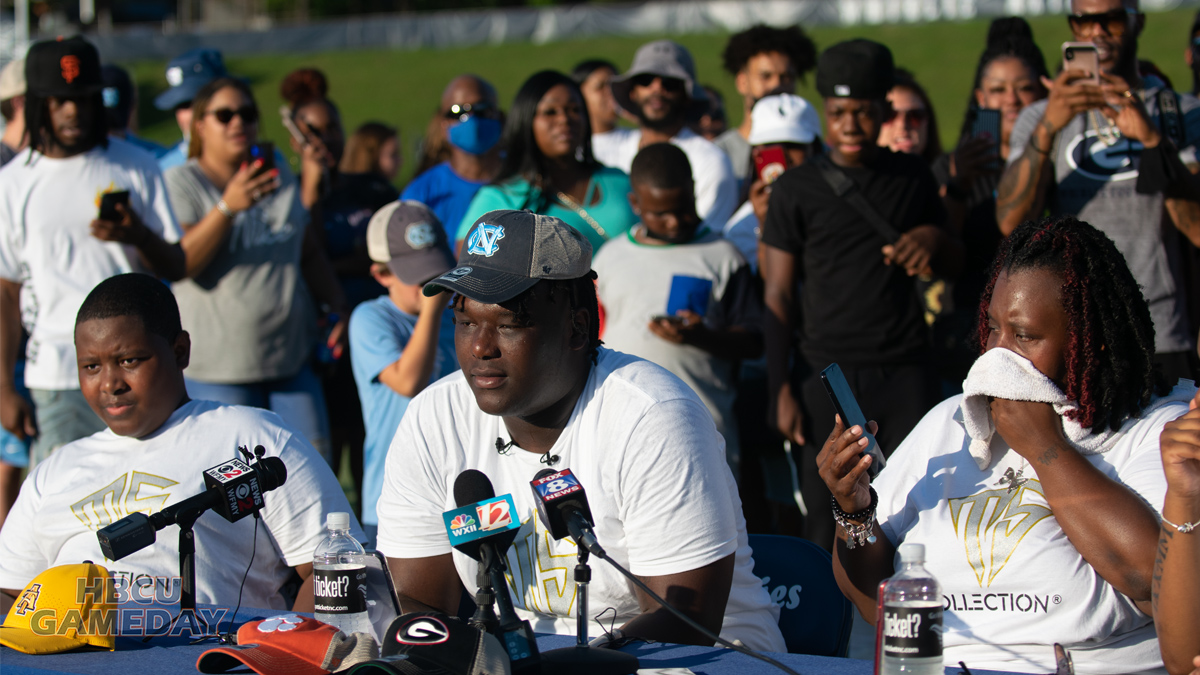 An HBCU hat on the table for Travis Shaw mattered

Travis Shaw may be the biggest recruit ever to come out of Greensboro, NC. The five-star kept his local HBCU in the running until the end.

GREENSBORO, NC — Five star defensive tackle Travis Shaw sat out on the field at Jamieson Stadium, flanked by his brother, mother and sister. Behind him, a crowd of family, friends, teammates, and well-wishers stood in the sweltering, stiff-late evening heat to see where the Grimsley High School star would be taking his talents next fall.

Across from him stood a solid media contingent awaiting the announcement as well, with the sun to our backs along with other on-lookers trying to get their social media looks as well.

Shaw, rated as a top-four player in the 2022 class, was going live as well. He beamed with excitement as he passed the 1k follower mark as the countdown and heat continued.

Just after 6:30 PM EST, he answered questions during a live interview on the CBS Sports App. He then began to read from his prepared speech, thanking everyone from God to his family to all of his coaches, going back to peewee and rec-league. A few tears fell, mixed in with sweat. When his acknowledgments were done, the excitement and anticipation were as thick as the humidity.

“With that being said,” Shaw smiled and leaned over the hats from North Carolina A&T, North Carolina, Clemson and Georgia. The crowd was now in a frenzy. His people started yelling:

“Wherever you go, we going with you, Trav…

By the time he grabbed the hat the crowd drowned out the words “North Carolina.”

The Greensboro Community is behind Travis Shaw

Probably the most vocal person in the crowd was Brian McLaughlin. Better known as B-Daht, McClaughlin is from Greensboro. He’s a radio host, PA announcer and comedian who has known Shaw since before he had any stars by his name.

His son, Izayah, and Shaw played on the same basketball organization. He recalled when Shaw had to have his leg broken due to being bow-legged in sixth grade.

“To see him bounce back from that to being one of the highest recruited players in Greensboro history. You got Keenan Allens, your Eric Ebrons, but on this level, this is a big, big deal. This is somebody that’s like a little brother to me that I’ve watched grow up and be super successful. And it’s super dope. We’re happy. The city is super happy for Travis.”

McGlaughlin is a Winston-Salem State grad, and he said he appreciated Shaw’s bringing that A&T hat with the Power Five squads.

“When you’re from Greensboro, going to A&T is part of the process. You automatically think, I’m going to be an Aggie. I’m from Greensboro. I very easily could have been an Aggie, but I wanted to get away from home the same way I’m Sure Travis wants to do and just go off and be great. And we’re all 100 percent confident that “The Big Steppa” is gonna go be great.”

We knew it was up to two teams: Is going to go HBCU and stay home, or is he gonna be a Tarheel. I was cool with either one.

Why Travis Shaw gave A&T a seat at the table

In addition to supporting Travis Shaw, a lot of the people who showed up to Grimsley on Saturday night also had visions of seeing him play in their favorite colors. There were several shirts with “G” logos on them, but most of them were from Grimsley. The was also plenty of Carolina Blue in the crowd. And there was some A&T blue-and-gold as well.

Shaw turned a lot of heads earlier this summer when he listed A&T along with the Power Five trio. And, if we’re being honest, even the most die-hard of A&T fans weren’t betting the farm on Shaw coming down the road to play in the Big South. Shaw expounded on the reason why A&T made the list.

“It wasn’t just because it’s A&T. It’s all culture,” Shaw said. “I turn around, I can hear their band playing on Gamedays.”

A&T knew about Shaw early. After all, when you are as big and talented as Shaw is, word gets around fast. But the staff knew he had Power Five written all over him.

“My freshman year they kept it real with me and the was like, they aren’t going to offer me because they wanted me to do bigger and better things,” Shaw said. “That was just showing love right there. Keeping it real with themselves, to keep it real  with me.”

Eventually, though, A&T did offer Shaw. Already having his respect kept their name in the game along with the big boys.

‘Just the love that they showed, to keep it real,” he said. ‘To say that they weren’t gaining to offer me my freshman year and to end up offering me, it was just big.”

So in the end, the gold A&T cap ended up being left on the table by Shaw. That’s no surprise — UNC’s facilities and reach are light-years ahead of A&T or any other HBCU or FCS program for that matter. A&T has a lot to offer, but it’s not a Power Five or an FBS program. At least not right now. But maybe by the time it heads south to Athens to face UGA in 2030, that won’t be the case.

And if that happens, an HBCU hat just being on the table won’t be a big deal. At that point, it will be a serious threat to be picked up and put over the head of a player like Travis Shaw.

But even if it doesn’t, A&T found itself on the table that a lot of other Power Five and FBS schools would have loved to have been on. Even a small step is one forward, and that matters.

An HBCU hat on the table for Travis Shaw mattered