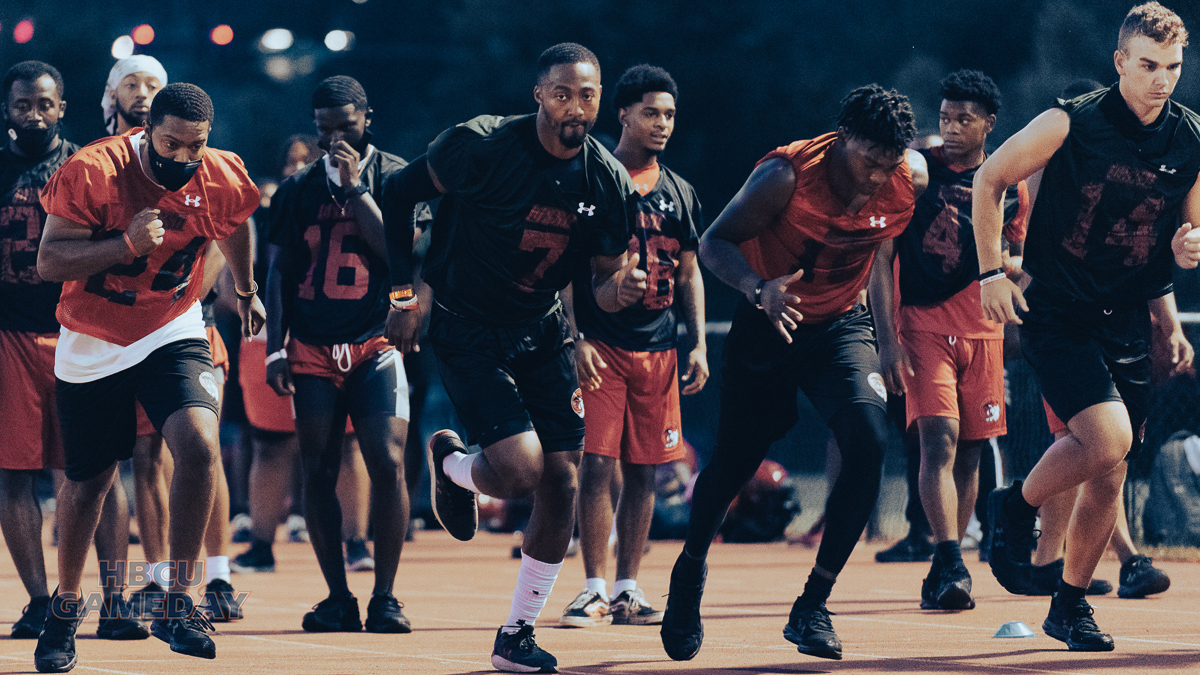 After a year off, WSSU football is eager to get back on the field to show that 2019 was a fluke and it is far better than where it was predicted to finish..

The dew was still fresh on the grass at Civitan Park when WSSU football stepped onto the practice field the first day of fall practice.

Winston-Salem State interim head coach Robert Massey couldn’t hide how excited he was to have his team back on the field.

“I’m trying to look tough, but I’m so happy I can’t do nothing but smile about it,” he said. “It has been a real journey, not just for WSSU football, but for the football world — and for us in Division ii in particular, because in our case — we didn’t play a year ago.”

A lot of things have changed since the last time WSSU played in 2019. And for a WSSU program that had its first and only losing season of the decade, that’s probably a good thing.

One addition Massey has made since the end of the 2019 season was bringing back a legend to take over the passing game. Kam Smith had a storied career at WSSU from 2010 through 2012, leading WSSU to back-to-back CIAA championships and a national title run while re-writing the school’s record books. Now he’s on the staff.

“He’ll be our quarterback whisperer — that’s what they call them now instead of quarterback coach,” Massey said with a laugh. “But that’s a guy that played at a high level, he’s been coaching so he has great understanding of the position from a coaching standpoint, he’s a good recruiter, he’s a great communicator. So he’s going to help us to make sure that our quarterbacks get the attention to detail that they need.”

Smith is one of several new faces on the coaching staff, many of them still fairly young. That’s by design, according to Massey, who played in the CIAA with North Carolina Central in the 1980s before embarking on a pro career.

“We got guys that are old enough to garner the respect from the younger players, but at the same time can connect with them because they are, ten years, probably removed from college themselves,” he said. “So it’s a good group, a good combination of guys that we’ve brought in that will be able to connect with our kids.”

As with everything, COVID-19 remains the ever-present elephant in the room for Massey and his staff. Pre-practice testing Monday morning came back 100 percent negative, he said. And they plan on keeping it that way. The CIAA has not mandated that student-athletes be vaccinated to participate like the SIAC, but WSSU is hoping its student-athletes trust the science. It is also attempting to create its own “bubble.”

“We’re closing the locker room. Guys will get their equipment, they’ll take it to their dorms,” Massey said. “Lunch-time, we’ll get the grab-and-go boxes so we won’t be in a big crowd.”

WSSU enters the 2021 campaign in an unfamiliar position — that of the underdog. The 4-6 finish of 2019 left a lot to be desired for a program that won six-straight division titles and four championships from 2011 through 2016. The offense averaged just 17.8 points per game that season, finishing next-to-last in passing and middle of the pack rushing.

The defense led the way in 2018, giving up just 17.6 points per contest, third in the CIAA. It is led by linebackers Kalen Allen and Ta’Shaun Taylor, as well as defensive back Joshua Flowers. All three were picked on the All-CIAA preseason team.

Allen finished with 12 tackles for loss in 2019. He says the team’s improvement in terms of talent is already evident.

“We feel like we filled in those pieces that we needed,” he said. “We got more athletes. I’m just happy about that. We got a big D-Line. Big boys that can move so me and my other LB, we can make plays, roam around, have fun. We feel like we got a lot faster on our defense, and a whole lot smarter also.”

Taylor finished second in the CIAA with 85 tackles in 2019. He says the year off has given him and his teammates plenty of time to correct what went wrong in 2019.

“It was a lot of downtime, a lot time for us to just go back over film, see the mistakes we made — the plays that we were lined up wrong and just re-evaluate everything,” he said.

As if that wasn’t enough, the Rams got extra motivation when the CIAA predicted finish came out. They were picked to finish ninth in the conference. That’s the lowest expectation for the football program in recent CIAA memory.

“We are WSSU. We are the winningest team, football-wise, in the conference over the last 10-12 years,” Massy said. “So for us to fall off is disappointing. We’re putting ourselves in a position to make a run for the roses.”

“It just put a bigger chip on our shoulder. We know we got something to prove,” he said. “We know what we can do and we just gotta go out there and execute. We know we’re going to finish a lot better than ninth, but it’s just going to take more effort. So it just gave us more motivation — we’re going to be the underdog every day, giving it our all.”