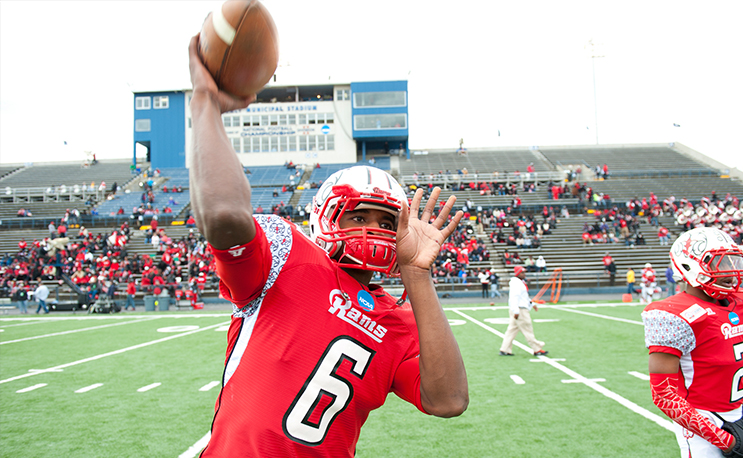 In the 100-plus year history of the CIAA, no QB has a better combination of team success and individual stats.

When it comes to quarterbacking legends, the CIAA has had its share, particularly over the last 30 years.

Smith arrived at Winston-Salem State at a critical time in the school’s football history. WSSU made its return to the CIAA in 2010 after flirting with Division I football and a stint in the MEAC the previous four years. He came in under first-time head Connell Maynor after starting his career as a receiver for Navy, looking to prove something himself. His legend started with back-to-back wins over long-time rivals North Carolina A&T and North Carolina Central and ended with him nearly taking the school to the national title.

His final two years were arguably two of the best in WSSU and CIAA football history. The Rams finished perfect in both the 2011 and 2012 regular seasons, advancing to the national semis in his junior season and the national title game as a senior. His senior season was particularly electric. He completed 214 of 360 passes for 3,312 yards and 43 touchdowns against just 11 interceptions in 14 games while leading WSSU to its second-consecutive CIAA title.

As impressive as those numbers are, a deeper look into the numbers shows that Smith effectively sat out most fourth quarters that season, and some second halves all together. Injury held him out of WSSU’s first playoff game and he only played the final four minutes of its third-round game, helping WSSU keep its championship dreams alive.

For his career, Smith completed 535 of 896 passes (59.7) percent for 7,540 yards passing and a CIAA record 96 touchdown passes in just three seasons. He also rushed for 959 yards, putting his total offense numbers just shy of 8,500. Simply put, the better he got, the more the team put the ball in his hands and the better the team got. No quarterback in CIAA history has combined playmaking ability with accuracy and winning the way Smith did.