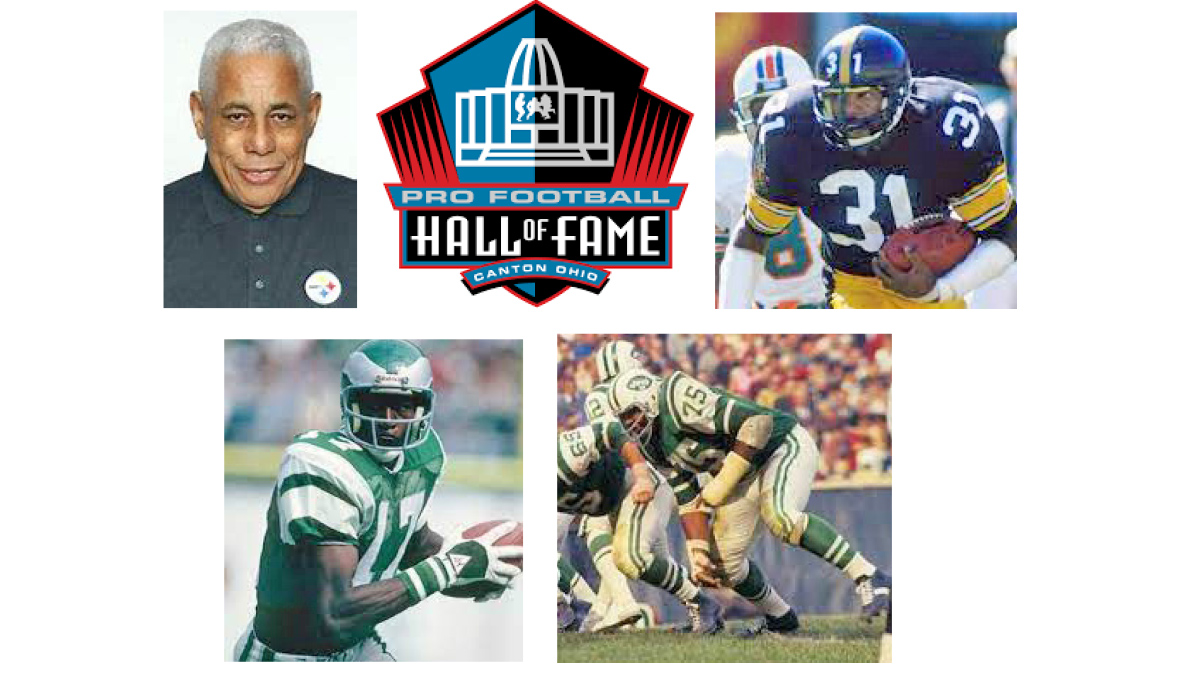 HBCU legends on display at Hall of Fame weekend

HBCU legends and their supporters will be on full display when the Pro Football Hall of Fame stages its annual induction ceremonies this weekend in Canton, Ohio.

Shell, Hill and Carmichael and 17 others are members of the special Centennial 2020 class that did not have a ceremony a year ago because of the COVID-19 pandemic. They will be inducted this Saturday (Aug. 7) at 6:30 p.m. at the Tom Benson Hall of Fame Stadium. Hill passed in April 2016.

Nunn is being enshrined as a contributor. He is the only African-American to receive such an honor in the history of the hall. Seven others are members of the 2021 class. Their induction is set for Sunday (Aug. 8) at 7:00 p.m. Nunn passed in May 2014 at 89.

Shell is going in 34 years after his retirement in 1987 following a sterling 14-year career at strong safety for the Pittsburgh Steelers. The Whitmire, South Carolina native, was an integral part of Pittsburgh’s ‘Steel Curtain’ defense that led the franchise to four of its six Super Bowl titles (IX, X, XIII and XIV) in the 1970s.

The hard-hitting Shell, signed as a free agent by Pittsburgh, became a stabilizing force at the back end of the famed Steelers defense. He started 11 straight years, was a five-time Pro Bowler and a four-time all-Pro selection. Nicknamed “The Torpedo” by his teammates, Shell played in 201 games for the Steelers, third only behind current Pittsburgh quarterback Ben Roethlisberger (233) and late Hall of Fame center Mike Webster (220).

He retired as the NFL strong safety career leader in interceptions with 51.

Shell fourth Bulldog in the HOF

The 5-11, 190-pounder entered South Carolina State in 1969 on a football and baseball scholarship. He played linebacker before SCSU’s Hall of Fame head coach Willie Jeffries switched him to defensive back. At that position at SCSU, he was a two-time team MVP, an all-MEAC selection and All-American.

Shell becomes the fourth SC State product to earn entry into the Hall of Fame. His induction ties South Carolina State with Grambling State, Jackson State, and Morgan State for the most players in the prestigious shrine from an HBCU. He joins former Bulldogs Marion Motley, David “Deacon” Jones and Harry Carson who preceded him into the Hall.

Think about this! In the Palmetto State, South Carolina State leads the way with now four of its former players in the Hall of Fame. The University of South Carolina has none. Clemson has one, Brian Dawkins, who was enshrined in 2018.

Hill was the massive offensive tackle and tenacious blocker that protected and manned the left side of the New York Jets offense for 14 years. Twelve of those years he helped usher quarterback Joe Namath to a Hall of Fame career and opened holes for a slew of Jets’ running backs.

Hill was a key cog in the AFL champion Jets’ 16-7 upset of the NFL champion Baltimore Colts in 1969 in Super Bowl III. Many believe that upset spurred the merger of the two leagues.

At Texas Southern, Hill played on the offensive and defensive line and earned all-American honors. He was drafted by the NFL’s Colts in the 11th round and signed by the AFL’s New York franchise that became the Jets as a free agent. Hill played in four AFL all-star games and four Pro Bowls and holds the Jets’ franchise mark for offensive lineman with 195 consecutive games played and 174 consecutive starts.

Much like Detroit’s Calvin Johnson who is a member of the 2021 HOF class, at 6-8, 225 pounds Carmichael was a match up nightmare for NFL defensive backs.

From 1973-83, an 11-year span playing for the Philadelphia Eagles, he led all NFL receivers in receptions (549), receiving yards (8,414), and receiving TDs (77). He had an incredible streak of 127 consecutive games with at least one reception. Again like Johnson with the Lions, Carmichael played on Eagle teams that were not very good.

A Jacksonville, Florida native, Carmichael played basketball, football and ran track at Southern. He was a seventh-round pick by the Eagles in the 1971 draft and became the team’s all-time leader in every receiving category. He was selected to the Pro Bowl four times and was twice named all-Pro.

Nunn’s father, William G. Nunn, was the managing editor of The Pittsburgh Courier, one of America’s most influential black newspapers. In 1950, the paper started the Black College All-America Football Team chosen from squads at America’s Historically Black Colleges and Universities (HBCUs). The younger Nunn took over the paper when his father retired in the mid 1960s and continued selecting the teams. Nunn tried to convince the local Steelers that they were missing out on a gold mine by not drafting and signing those players.

In 1967, the Steelers hired him as a part-time scout. Two years later, he was promoted to personnel executive and served in that capacity officially until 1987. He was on the Steelers’ payroll and a key member of its brain trust right up until his death.

Nunn was the linchpin to getting Donnie Shell and a number of other outstanding HBCU players to the Steelers. Mel Blount out of Southern (1970) and John Stallworth of Alabama A&M (1974), both already in the Hall of Fame, along with L. C. Greenwood of Arkansas AM&N (now Pine Bluff) in 1969, who should be there, were among those drafted. Shell was one of those signed as a free agent.

When the Steelers won their first Super Bowl (IX) in January 1975, 11 of the 43 players – more than one-quarter of their 43-man roster – were from the HBCU ranks. All were there because of Nunn. Nunn could certainly be called, ‘The Man behind the Steel Curtain

HBCU legends on display at Hall of Fame weekend

111
The Latest in HBCU Sports and Culture