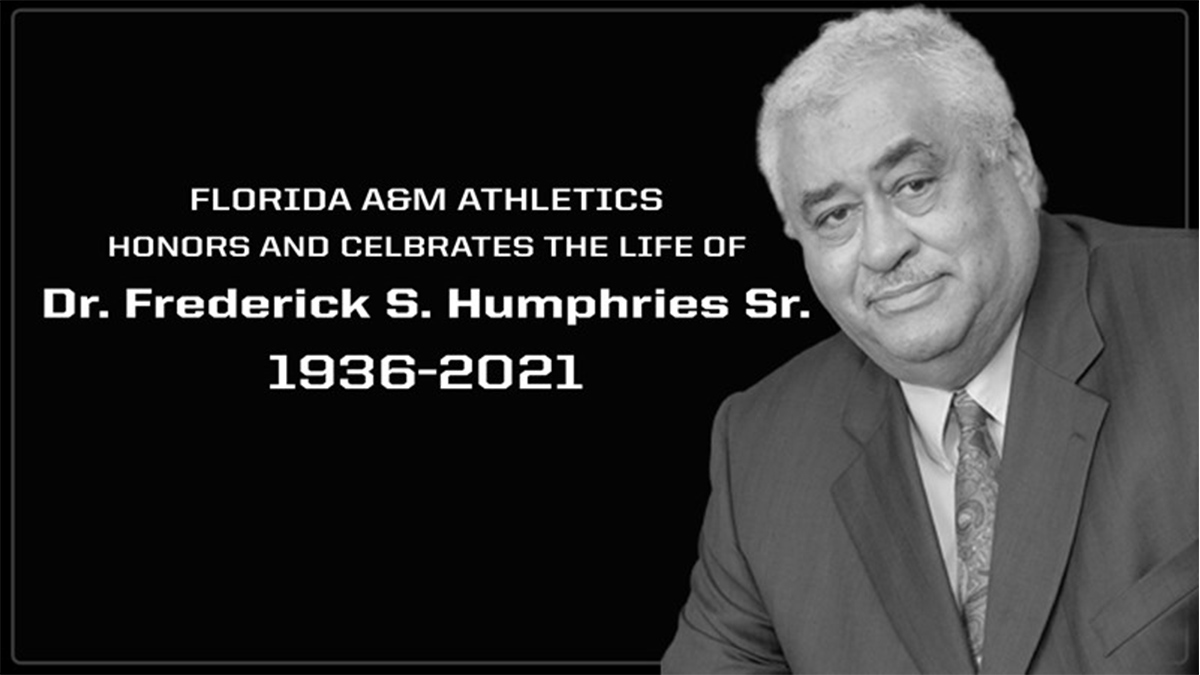 TALLAHASSEE, Fla. – Frederick S. Humphries, Sr., Ph.D., under whose leadership Florida A&M University (FAMU) was named College of the Year, and who was a lifelong cheerleader and advocate for his alma mater, died Thursday, June 24, 2021, at his home in Orlando, Florida. He was 85.

Dr. Humphries, a renowned scholar, charismatic, visionary, and innovative administrator and admired public servant, left a legacy that touched countless students, corporate leaders, philanthropists, and peers across the nation. President Larry Robinson, Ph.D., who came to FAMU during Dr. Humphries’ tenure, has ordered that flags on the main campus and all satellite locations be flown at half-staff.

“We have been informed of the unfortunate passing of Dr. Frederick S. Humphries, the eighth president of Florida A&M University. The dark clouds have indeed gathered on the horizon.  Dr. Humphries is one of FAMU’s favorite sons. He committed his life to the advancement of higher education, in particular within the HBCU community, and changed the trajectory of FAMU,” Robinson, FAMU’s 12th President, said in a statement.  “We join the Humphries family, friends and Rattlers around the world in celebrating a life dedicated to service and one well lived.”

Dr. Humphries had a distinguished career in higher education as the eighth FAMU president and president of Tennessee State University (TSU), in Nashville.

Along with his almost three decades of leading two Historically Black Colleges and Universities (HBCUs), the Apalachicola, Fla., native served on countless corporate boards, and earned an impressive list of accolades and awards.

Dr. Humphries taught at the University of Minnesota before returning to his alma mater as a professor of chemistry in 1968.  While at FAMU, he was also director of the 13-College Curriculum Program for HBCUs. He was named president of TSU in 1974.

Dr. Humphries shepherded TSU, an HBCU, through the merger with the predominantly white institution (PWI) University of Tennessee-Nashville campus. The legal case for integration marked the first time an HBCU had successfully merged and acquired a PWI in American history.

“The FAMU and Tennessee State communities has lost a great supporter of higher education,” said Kelvin Lawson, chairman of the FAMU Board of Trustees. “Our hearts are heavy, but our opportunities are brighter based on the life and doors opened by Dr. Humphries. University leadership will be connecting with the family to determine how to best honor his life and dedication to FAMU.”

At FAMU, Dr. Humphries was the consummate cheerleader and innovator. He created the Life Gets Better Scholarship and the Graduate School Feeder Program (GSFP), which more than doubled enrollment while simultaneously raising academic standards. He increased the number of National Achievement Scholars, ranking first in the nation three times, surpassing Harvard University and Stanford University. He also helped boost FAMU to the nation’s No. 1 spot as a producer of African Americans with baccalaureate degrees, and to No. 3 in the nation as the baccalaureate institution of origin for African American doctoral degree recipients.

The crowning achievement of his tenure was FAMU’s selection as the first TIME Magazine/Princeton Review “College of the Year” in 1997.

“When he came to FAMU, Dr. Humphries had a chip on his shoulder because he was here when the University’s law school was closed,” Jackson said. “He did not like the way it was done. He was highly motivated to prove that, with the right leadership and programs, FAMU could be the best in the country, and he meant to prove it.”

Dr. Humphries was respected internationally for his keen insights on the education of minority students, particularly in math and the hard sciences, and his unique and visionary approaches to producing successful educational outcomes.

The popular former president will be forever recognized for his inspiring, unmatched delivery of “The Rattler Charge” at FAMU or wherever Rattlers gathered. Even though “The Rattler Charge” began with FAMU President George W. Gore decades earlier, while Humphries was a student, Humphries’ embellished rendition will be remembered by Rattlers everywhere.  He was credited with turning FAMU into one of the nation’s premier Black colleges and the restoration of its law school, now located in Orlando.

“Dr. Humphries was a game changer,” Jackson said. “He turned things upside down . . . and made FAMU one of the top universities in the country. We were hot stuff.

“He was brilliant,” Jackson said. “He was committed to African American students to a degree that I had never seen before. He wanted to prove to the Board (of Regents) that FAMU could compete on the same level with the recruitment of top students anywhere. He was one of the most intelligent presidents” in the Florida system.

Following his resignation, Dr. Humphries served as president and CEO of the National Association for Equal Opportunity in Higher Education. In 2003, he was named a Regent Professor at the FAMU College of Law in Orlando.

Dr. Humphries was chairman of the Board of Directors of the National Association of State Universities and Land Grant Colleges, and a member of President Bill Clinton’s White House Advisory Committee on HBCUs. He was also a member of the Board of Directors of Wal-Mart Stores, Inc.; Barnett Bank (Bank of America), Florida, the National Merit Corporation, the Princeton Review, Academy for Educational Development (AED) and a founder and board member of the Thurgood Marshall Fund.

Funeral arrangements will be announced when they are finalized.