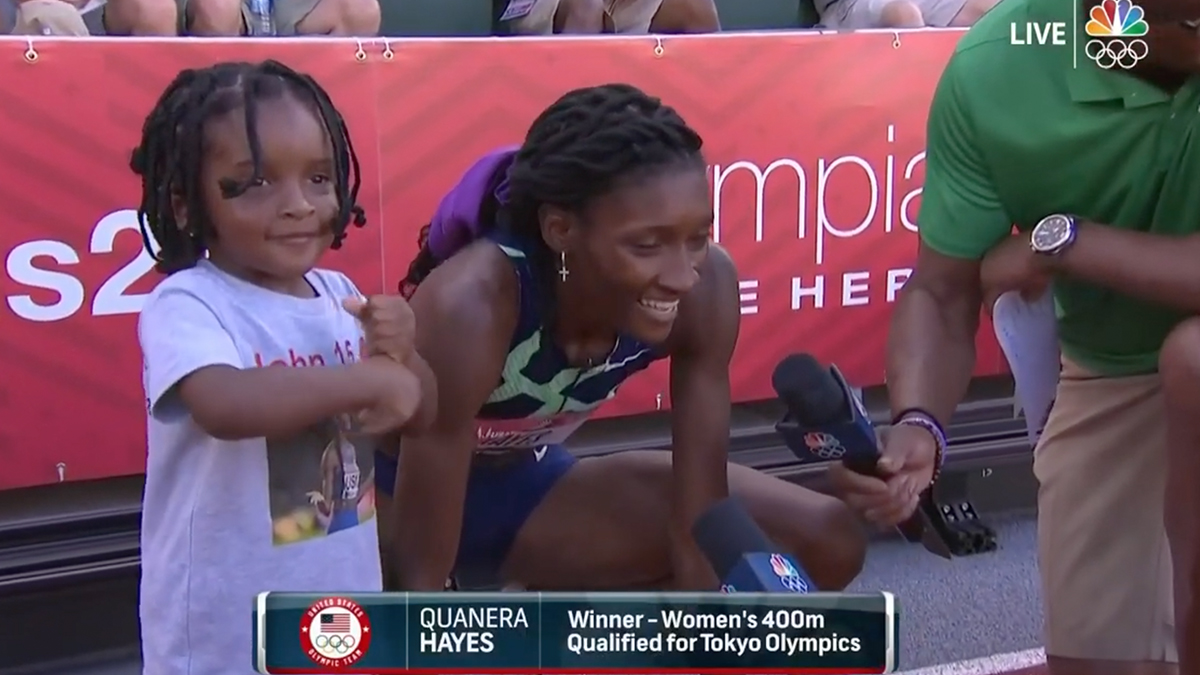 Like Allyson Felix, Quanera Hayes is mom and track star

Like her teammate Allyson Felix, Quanera Hayes is balancing both motherhood and Olympic-level track excellence.

The Quanera Hayes and Allyson Felix “mommy moment” was perhaps the best moment of the 2021 US Olympic Trials.

The Livingstone alumna beat out the Olympic legend in the 400m, earning a shot to her first-ever Olympics next month. Allyson Felix is headed to her fifth. The two future teammates were joined on the track by their children — Hayes’ son Demetrius and Felix’s daughter, Camryn.

On Wednesday, Hayes penned an Instagram post saluting Felix for many things. Her athletic achievements. Her faith. And her dedication to motherhood.

Felix’s story of motherhood is pretty well known, but Hayes has a story as well. She revealed during the Olympic Trials that she nearly quit track before finding out she was pregnant with her son in 2018. She couldn’t run while pregnant with Demetrius because he was too low. And even after she had him that October, the transition was rough.

“I would do one run in practice and I would just stop — because it would just hurt. And I was discouraged because I wasn’t hitting my times,” she said. So it was a long road and I thought about giving up after that as well. But when you have a family to take care of, you have more meaning.”

She eventually got back on track and as she prepped for the 2020 US National Championships, she sent Demetrius to visit his family in the Bahamas. It was during that time that the COVID-19 pandemic hit, separating the two for months.

“There would be times when I would call him on FaceTime and the minute we got off of FaceTime I would go and I would cry because that’s the most I’ve ever been away from my son,” Hayes said.

The two were eventually re-united, and Hayes had both her son and track again.

“I will never let that happen again,” She said on Sunday. “So if I can’t drive to him, in a situation like that, he can’t go without me.”

However, Quanera Hayes will have to leave for Tokyo soon, and Demetrius will have to stay behind. She doesn’t like it, but she understands it.

“I’m a little sad he won’t be there. My first Olympic team — being a mom — you want your kid there,” she said. “But I understand that his health, and my health, and everybody else’s health is important, and that comes first.”

Hopefully she’ll return with some gold for Demetrius.

Like Allyson Felix, Quanera Hayes is mom and track star