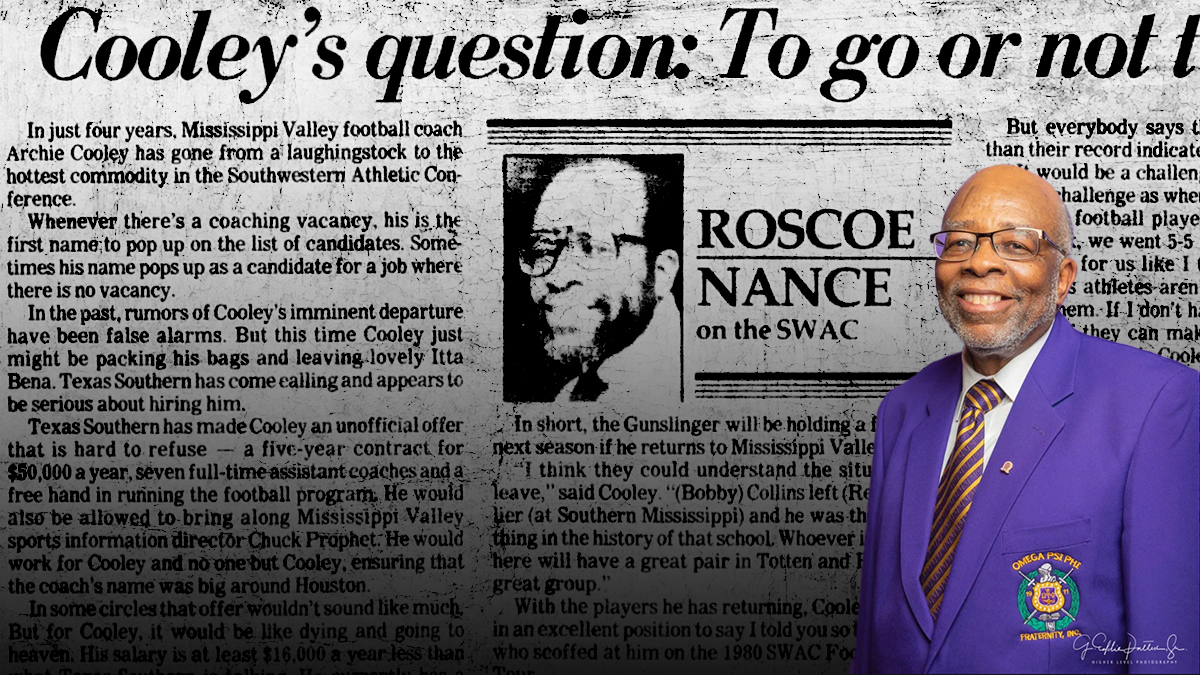 Legendary sports writer and reporter Roscoe Nance has a Scholarship endowment being inaugurated in his memory at Tuskegee.

Roscoe Nance was known as the ‘dean’ of black college sports journalists. He earned that moniker for his long-standing, near 50-year commitment and love for these institutions and the products that they have produced historically, both on and off the fields of play. He touched countless lives through his writing, his friendship, and activism. His easy-going manner belied a fierce commitment to justice, equality, and fairness which would readily come forth anytime those ethics were violated.

A Union Springs, Alabama native, Roscoe embarked on his pioneering writing career after graduating from Tuskegee in 1971. He worked for the Columbus (Ga.) Inquirer before becoming a beat writer for the Jackson (Ms.) Clarion-Ledger from 1978-85. At the Clarion-Ledger, he was the first African-American sportswriter for a Mississippi daily newspaper.

It was at the Clarion-Ledger that he covered legendary SWAC football coaches such as Eddie Robinson of Grambling, W. C. Gorden of Jackson State, Marino Casem of Alcorn State and Southern and Archie Cooley of Mississippi Valley State.

He was a key figure on the famed “SWAC Football Press Tour,” started by sports information giants Sam Jefferson of Jackson State and the late Chuck Prophet of Mississippi Valley State, that made stops in five major markets down South (Montgomery, Baton Rouge, Jackson, Houston and Shreveport) with the coaches and players like future Hall of Famers Jerry Rice and Doug Williams in tow. It was perhaps the greatest marketing and public relations vehicle the conference has ever employed.

“He helped the SWAC, particularly the Mississippi schools – Jackson State, Alcorn State and (Mississippi) Valley (State) – get great publicity in the Clarion-Ledger and, because of that coverage, other papers had to follow suit,” said Lonza Hardy, a former PR director for the SWAC. “Jackson State had its own section on Sundays following Saturday’s games and soon, others like the Baton Rouge Advocate, beefed up their coverage. Roscoe was like the beat reporter for the SWAC. He was one of the early standard bearers in terms of great coverage.”

It was in that cocoon that he made his mark and endeared himself to a number of his colleagues and subjects. So intimate was his connection to those he covered that he coined the nicknames “The Godfather” for the ubiquitous Casem and “The Gunslinger” for the flamboyant Cooley, often adding color and panache to his chronicling of the Historically Black College and University (HBCU) experience.

He went on to write for USA Today from 1986 to 2007 covering soccer across the globe and the NBA. After his retirement in 2007, he continued to cover HBCU sports and write features for a number of publications and online entities including the Mid Eastern Athletic Conference, the Southwestern Athletic Conference, the Black College Sports Page and Tom Joyner’s Black America Web. He was also a passionate and consistent volunteer in his church, his community and through his fraternity.“I think this is a fitting tribute to Roscoe,” said Hardy. “For all the great things he did for the SWAC and HBCUs, his heart was always with Tuskegee.”

A dedicated son of Tuskegee

Willye M. Nance, wife of Roscoe Nance, has begun an effort to raise $25,000 to endow a scholarship in his name at his alma mater, Tuskegee University.

“Roscoe was a 1971 graduate of Tuskegee where he majored in political science,” Nance said in her letter inaugurating the scholarship. “…Though he traveled widely, Tuskegee was one of the places that held a special place in his heart. Every year, he donated money to the university’s Presidential Essay Awards to support a student who was in good academic standing and who showed financial need according to the awards administrator and the Office of Financial Aid and, every year, except the year before his death January 2020, he returned to Tuskegee at homecoming, raising money to help fund scholarships for deserving students.

“This scholarship would continue his tradition of giving back and reaching back to support those who come after him,” she wrote. “I would deeply appreciate your help in establishing an endowed scholarship in his name. The scholarship would be awarded yearly.” All contributions are tax-deductible.

For those who knew Roscoe, who passed at 71, this effort needs little explanation or confirmation. But to those who didn’t, just know that he was a sports journalist with a deep love for all the things that matter – God, his family, his people, children, education, his alma mater, friends, and truth-telling.

As such, HBCU Gameday and the Black College Sports Page, with the approval of Mrs. Nance, have started a crowdfunding campaign on GoFundMe.com to help raise the funds. Our goal is to raise $10,000.

We are particularly calling on all journalists and others who interacted with and knew Roscoe – presidents, athletics directors, commissioners, coaches, sports information directors, and players, as well as others who knew the passion he brought to his writing – to contribute towards this campaign.

To support the GoFundMe Campaign, please go to:
https://www.gofundme.com/f/an-endowed-scholarship-in-honor-of-roscoe-nance

Or to contribute directly to Tuskegee, you may write out your check to Tuskegee University and write “Roscoe Nance Scholarship” on the memo line. Checks may be mailed to:

Or to donate electronically, you may go to www.tuskegee.edu/give. Fill in your information and you’re all set.