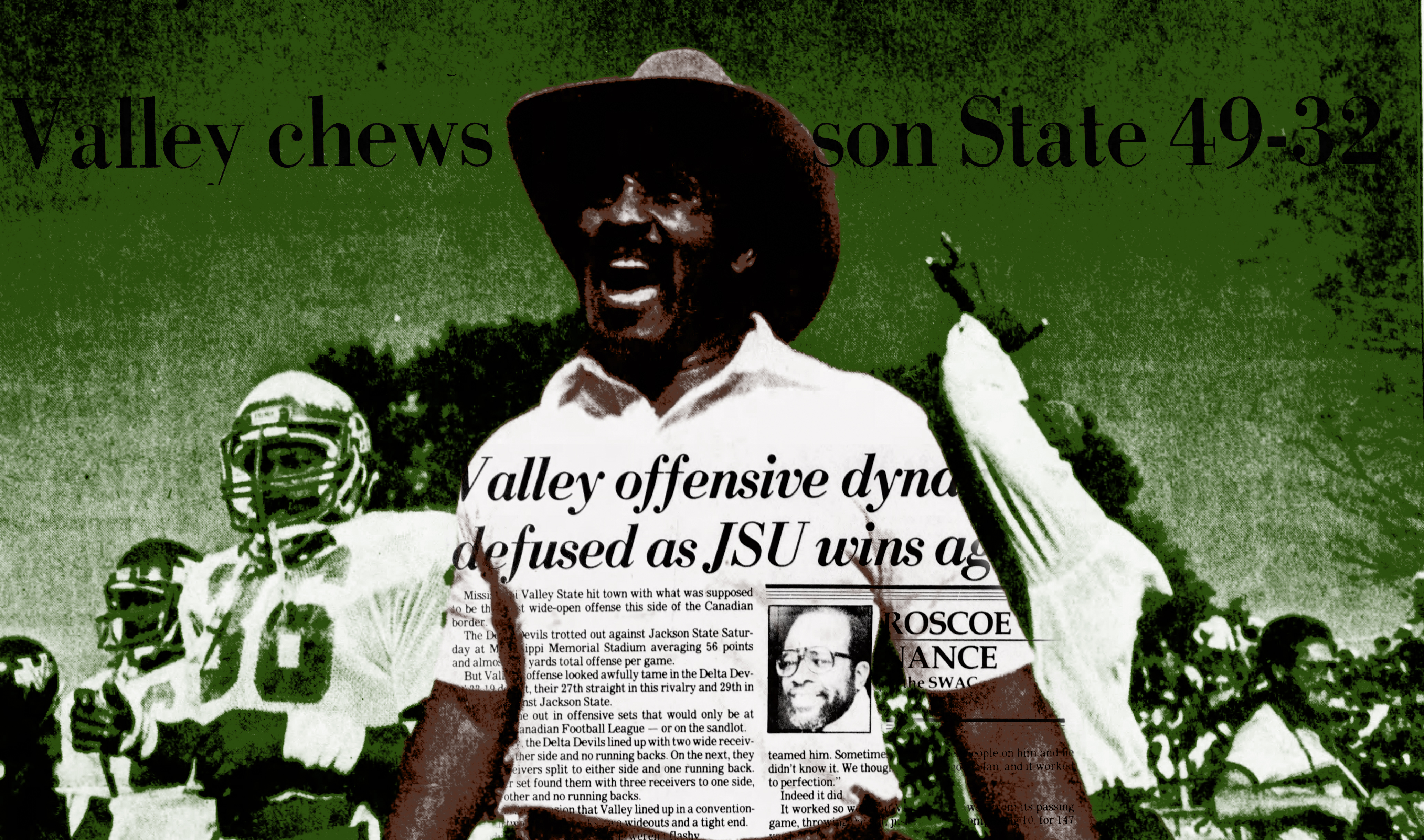 Archie Cooley was determined to knock mighty Jackson State off the SWAC mountain top. It took several false starts, but Mississippi Valley finally did it.

The Gunslinger knew that this was it: This was going to be the year Mississippi Valley State got over that big hump in Jackson.

Archie Cooley just knew that the 1982 season was going to be when his Mississippi Valley program finally knocked the smirk off the familiar faces of his alma mater.

Valley entered the 1982 matchup with Jackson State down bad. JSU held a 27-1-1 record in the series. Valley had managed a slim win in 1954 and a tie in 1956. Other than that, the series was heavily lopsided.

No one knew this better than Cooley. He was keenly aware of who had been the dominant power between the two schools. Cooley played at JSU in the 1950s and 60s for legendary head coach John Merritt. Merritt, of course, would leave Jackson for the Tennessee State job, where he would become one of the all-time greats.

Merritt would later hire Cooley away from Alcorn State and Marino Casem. He stayed at TSU for seven years before coming to take over the cellar-dwelling Delta Devils in 1980. By this point it was clear that the standard in Mississippi, and in the SWAC,  was W.C. Gorden and JSU.

Sure, Eddie Robinson was still around and getting talent, but his Tigers weren’t quite as fierce as the ones in the capital of the Magnolia State. Marino Casem and Alcorn State were never to be taken lightly, but ASU had only won one title since 1976, and was a middle-of-the-road program at the time.

Valley had been the doormat of the state, and often the SWAC for most of its time in the league. Located in tiny Ita Bena, Mississippi it made Lorman, Miss. look like an emerging Metropolis.

Cooley’s task when he was hired at the start of the decade was to build a program that could compete and give his alma mater hell. He was aware of the challenges— and he made sure everyone else did too — but he was up to the challenge.

“Coach Gorden’s got all the money and he’s got all the players,” Cooley said in August of 1982 during the SWAC Football Press Tour— forerunner to today’s Media Days. “Why he’s the only coach in the SWAC who tried to recruit Marcus Dupree.”

“I’ve never had athletes before,” Cooley said. “But I got ‘em now, and they’re hungry.”

Among those athletes was a freshman quarterback named Willie Totten. His top target was a sophomore receiver named Jerry Rice. Gorden, a Tennessee State grad that had played against Merritt, was aware that little brother was making moves.

“They appear to be much better than a year ago,” Gorden said. “They’re explosive. They have some guys who can make big plays.”

The end result of the 1982 game was a 44-17 loss for Valley. Totten threw the ball 56 times that day. But Cooley knew he had something special on his hands.

“We have 47 sophomores coming back next year. Jackson State is losing 35 seniors,” he said. “This thing can’t go on forever.”

A few days after the loss, Cooley got a two-year extension, giving him until at least 1985 to figure things out.

The 1983 matchup looked like the moment Mississippi Valley had been waiting nearly three decades. The Delta Devils came into the late September game averaging a blistering 56 points and 600 yards of total offense a game after two contests, both wins. Totten was a sophomore now, Rice a junior. Cooley promised he’d pass the ball 80 times before the game.

The offensive explosion happened that day in the Vet— it just came from Jackson State instead of Mississippi Valley. Valley went into halftime up 13-6. It would lose 33-19.

“Nobody can say the Delta Devils weren’t flashy,” Clarion-Ledger reporter Roscoe Nance wrote. “But no matter how flashy a team may be, it still has to settle down and play old-fashioned get-after-em football at some point. Valley never did.”

Reading between the lines, the verdict on Valley was that it was “soft.” And everybody knew it.

“I don’t want to say anything negative about Valley,” JSU quarterback John McKenzie told Nance. “But I knew if we kept the pressure on ‘em, they’d give up. That’s true in anything. Pressure will burst a pipe.”

In the 1984 season, it was Mississippi Valley who was applying all the pressure.

The Delta Devils had gone 7-2-1 in 1983, and looked to be even better this year. Without question, winning the SWAC was Valley’s goal that season. But it would have to take down Jackson to do it. There was no way around it.

Valley’s potent, high-powered offense flexed its muscles in the first two games of the season. It started with an 86-0 win at little Kentucky State. It followed that up with a 77-15 win over Washburn.

Unlike in previous years, Valley’s coach kept a pretty low profile in the media. He was Archie Cooley that week, not The Gunslinger.

Anticipation for the game built up all week, and simmered all Saturday long. The Vet was bubbling with energy as the bands played and the sun set over vintage stands over the stadium. It seemed all of Mississippi, was waiting to see if flashy Valley could finally knock mighty Jackson off its long-standing pedestal.

It was one thing to beat up on a Division II school. Something else to beat up on a white school nobody had ever heard of. But lil’ ole Valley and their cocky coach beating Gorden’s well-oiled machine? This is something folks had to see to believe.

Valley jumped out to a 14-0 lead in the first quarter on a pair of touchdown passes from Totten, the second of which went to Rice for a 21-yard score. JSU would counter in the second quarter with 17 unanswered points to take the lead less than four minutes into the quarter, the last of which came on a fumble by Totten in the end zone.

No doubt, the question reverberated through the hallowed stands at The Vet — was this the year Valley was going to take a lickin’ and keep on kickin,’ or would it be the Valley they all knew? The one that would put up a fight, but ultimately fold.

Totten dusted himself off and led Valley to two more scoring drives in the quarter to take a 28-17 lead into halftime. Pretty daunting in 1984 football — unless you had an offense like Valley’s — but then again, this was Valley. Remember what Robinson said about pressure?

The Delta Devils undoubtedly did, so they made sure to bring it in the second half. A solid kick return led to a one-play scoring drive, a 47-yard Totten-to-Rice connection that threatened to bury the defending SWAC champions.

JSU, the proud program that would be the most successful in the SWAC that decade, would fight back. It responded with back-to-back scores in the third quarter to cut the deficit to 35-32 with 2:32 left in the third.

The Valley fans amongst the crowd, no doubt felt at least some level of anxiety. They had seen their beloved school lose so many games at the hands of their bougie cousins from the city, and they couldn’t bear to get this close and not do it again.

It took Valley just 63 seconds to respond. Totten found Rice once again, this time for a 30-yard touchdown pass, capping a six-play, 80 yard drive. Valley had some breathing room as the game moved to the fourth quarter.

The final nail in the coffin would come as Totten found Joe Thomas for a 14-yard touchdown pass to make the score 49-32. The 49 points were the most JSU had EVER given up to another team at that point.

W.C. Gorden, who was writing his own legacy as one of the all-time greats, was gracious in defeat.

“It was inevitable we were going to lose to them sooner or later,” he said. “But we lost to a good football team.”

Totten finished 30-for-50 passing for 526 yards and six touchdowns. Rice caught 15 of those passes for 285 yards and four touchdowns. Thomas had seven receptions for 116 yards.

“That’s it. This is the year for the Valley,” Totten told reporters after the game. “We knew if we got the ball, we could score no matter what they did.”

Indeed, the offense was on fire by then. It was scoring better than a point a minute.

It was sweet redemption for the entire program, but particularly The Gunslinger. Cooley had labored long and hard to bring his program to where it could topple his alma mater. He had been outscored 159-36 in the previous four games.

He led his team on a victory lap around the stadium with his trademark hat waving the Valley flag.

“It’s a feeling you can’t describe,” Cooley told reporters. “I haven’t been this happy since my wife had her first child.”

Valley would go on to have a historic 1984 campaign, culminating in a game for the ages with its other in-state rival, Alcorn State. But in a season to remember, beating JSU was one of the highlights that no one around then will ever forget.