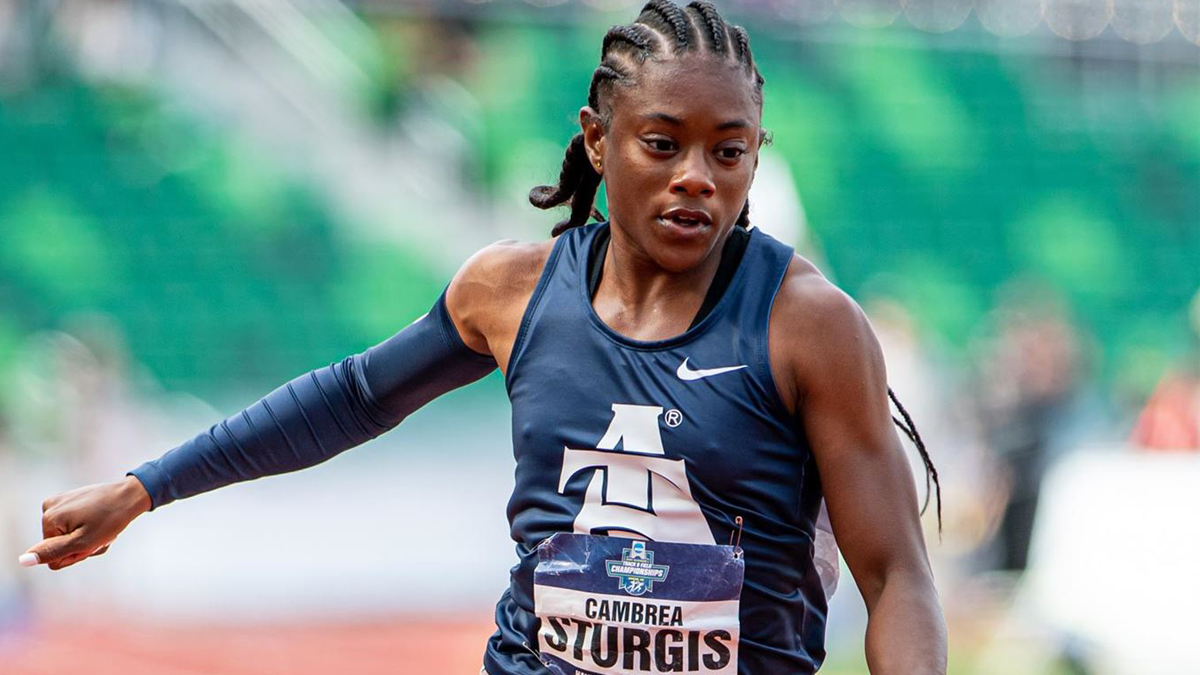 EUGENE, Ore. – North Carolina A&T sophomore Cambrea Sturgis will be a first-team All-American in three different track events when the 2021 NCAA Track and Field Championships at the new Hayward Field on the campus of the University of Oregon is over.

Therefore, the mission on Saturday will be to win three national championships in those events. On the second day of the NCAA nationals, the N.C. A&T women’s outdoor track and field team had six Aggies qualify for the finals in four events.

N.C. A&T will compete in five finals on Saturday as sophomore Kenady Wilson competes in the high jump at 5:30 p.m., Eastern Standard Time giving them a total of seven participants on Saturday.

Cambrea Sturgis will compete in three of those events, including the 100 meters, the 200m and the 4×100-meter relay. She qualified for the finals in each event by finishing in the top-2. Top-2 finishes in lane events automatically qualify a runner for the final.

In the 200m, Sturgis won her heat in 22.55 by rallying from behind like she did last week at the NCAA Division I East Preliminary Round in Jacksonville, Fla., to outlast Southern Cal’s Anglerne Annelus. Annelus had the lead when the runners went into the curve, but Sturgis accelerated over the last 80 meters to win.

The 4×100 team comprised of Sturgis, freshman Jonah Ross, sophomore Kamaya Debose-Epps and junior Symone Dariusfinished second in their heat at 43.17 behind the Oregon Ducks, who ran a season-best 42.86.

Cambrea Sturgis also finished second her 100m heat as she faced a harsh wind to finish in 11.20. She finished behind Oregon’s Kemba Nelson in the heat. Two years ago at NCAAs, Sturgis finished third nationally in the 200m and sixth in the 4×100. She is now a first-team All-American five times over.

Two out of the three 100-meter hurdlers who entered Thursday’s semifinal round for the Aggies advanced to the final in seniors TeJyrica Robinson and Madeleine Akobundu. Robinson posted the sixth-fastest time at 12.90 and was an automatic qualifier by finishing second in her heat behind Baylor’s Ackera Nugent (12.84).

Akobundu qualified based on the next fastest time. She ran a 12.93 to earn the eighth and final spot into the final. The 100mh final is scheduled for 6:42 p.m., Saturday.

The men get underway on Friday as they battle for national championships. Five Aggies will compete in four different events highlighted by freshman Randolph Ross Jr. and senior Trevor Stewart, going for a national title in the 400m at 9:02 p.m., Friday.

The duo will team up with junior Daniel Stokes and senior Akeem Sirleaf to go after the 4×400 relay national title at 10:21 p.m. Stokes, Ross Jr., Stewart and senior Elijah Young won the indoor 4×400 national title in March.

All five men come into Friday’s events as first-team All-Americans.