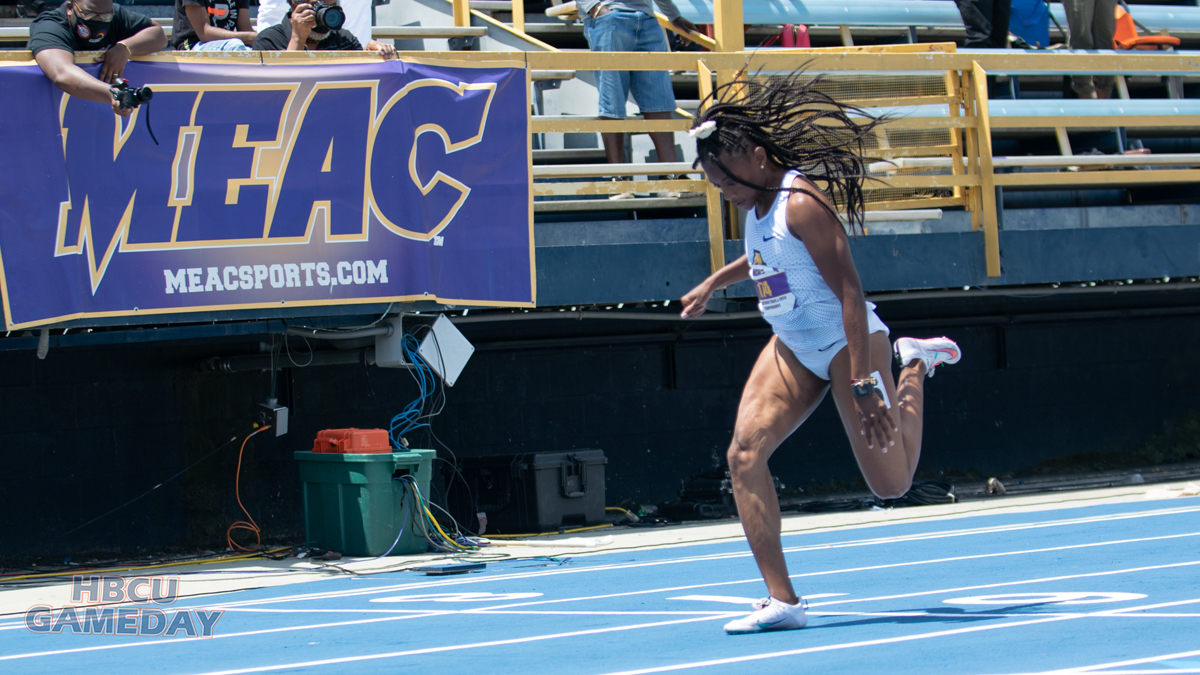 A&T’s Cambrea Sturgis off to fast start at regionals

North Carolina A&T sophomore Cambrea Sturgis clocked the top time in the 100m in the first round of the NCAA Outdoor Track and Field Eastern Regional Preliminaries.

JACKSONVILLE, Fla. – Sophomore Cambrea Sturgis ran the eighth-fastest time in the world this year. She sprinted to the best qualifying time in the women’s 100 meters Thursday at the 2021 NCAA Division I East Preliminary Round at Hodges Stadium at the University of North Florida.

The MEAC Champion in the 200m as well as the 100m, Sturgis ran an 11.01 to earn a spot in the east prelim quarterfinals. Sturgis’ performance was not only a personal best, but it is the fourth-fastest time run in the NCAA this season after two ladies in the west prelims went under 11 seconds on Thursday. Sturgis joined three other Aggies as east prelim qualifiers but was the only one of the four to advance.

The women’s 100m quarterfinal will take place Saturday night at 7:05.

But Cambrea Sturgis will have company in the women’s 200m. Sturgis had the fifth-fastest qualifying time at 22.78 to record a new season-best. Sturgis’ previous best this season occurred at Hodges Stadium when she ran a 22.86 on April 30.

All three Aggies who qualified for the 100-meter hurdles quarterfinals ran season-best. Two of the ladies ran personal-best. Junior Paula Salmon’s finished in 12.79, toppling her previous personal-best, 13.07, which she completed at Drake Relays on April 23.

Senior teammate TeJyrica Robinson finished in 12.81. It marked a new personal best for her, erasing her old best of 12.90 at the 2021 Mid-Eastern Athletic Conference (MEAC) Outdoor Championships on May 8. Fifth-year senior Madeleine Akobundu had the fifth-fastest time, posting a 12.88.

Her previous season’s best came on April 10 when she ran a 13.06 at the Aggie Invitational at N.C. A&T’s Irwin Belk Track. The 100mh quarterfinal will take place on Saturday at 6:45 p.m.

Three more Aggies are headed to Saturday’s quarterfinals, including two in the 400mh. Junior Sydni Townsend qualified with a time of 58.90. Junior teammate Nilaja Florence also advanced to the quarterfinal with a time of 59.05. Both ladies will compete at 7:55 p.m., Saturday.

Junior Delecia McDuffie is through to the quarterfinals of the 400m after posting a time of 53.21. McDuffie competes again at 7:25 p.m., Saturday.

The men’s quarterfinals are Friday at Hodges Stadium as the Aggies will learn who will represent them at the 2021 NCAA Track and Field Championships in Eugene, Ore., June 9-12.

A&T’s Cambrea Sturgis off to fast start at regionals