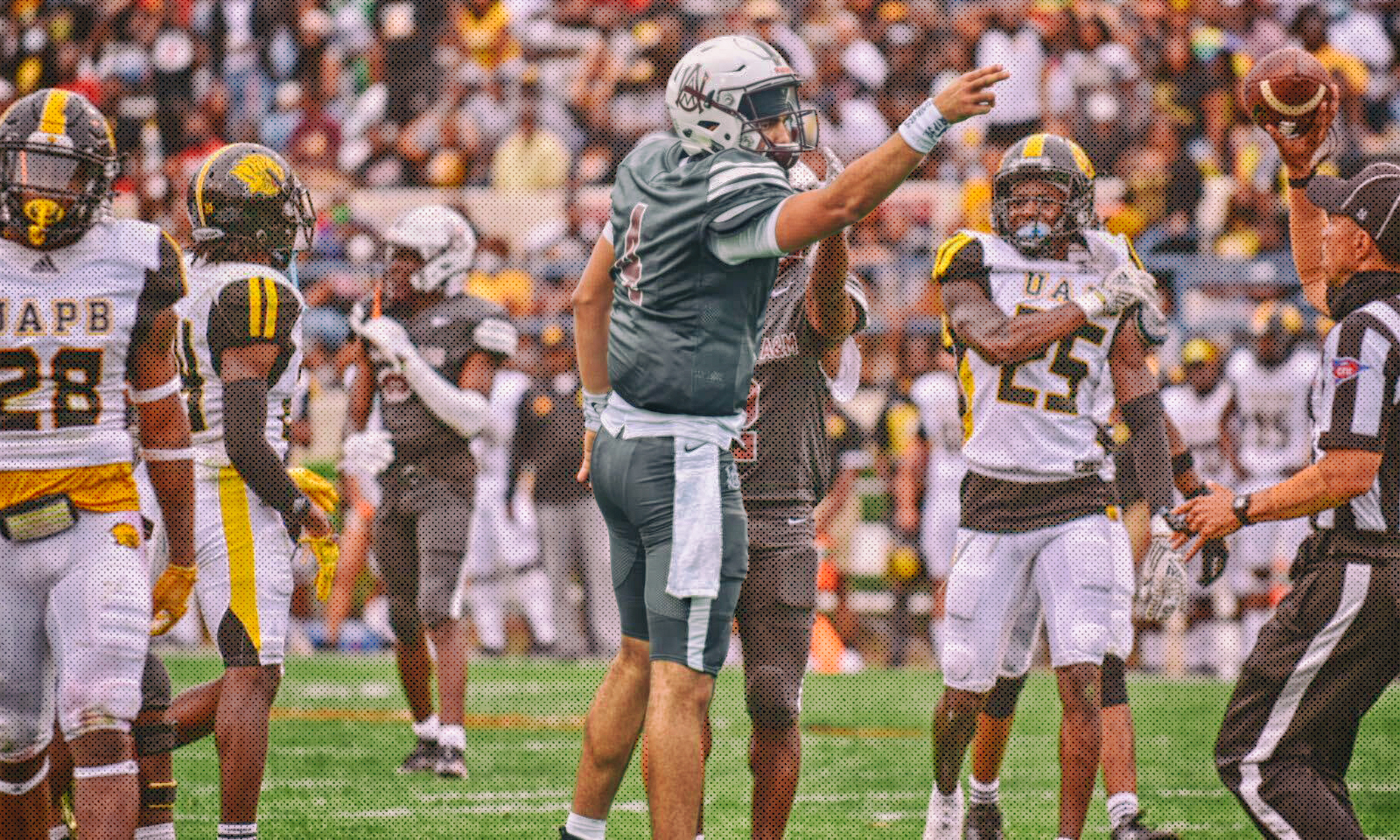 The game wasn’t decided until the final seconds of the game.

Alabama A&M (5-0) and the University of Arkansas at Pine-Bluff (4-1) wasted no time in showing the ESPN2 audience what the fans in Jackson, Mississippi already knew. SWAC football is a fireworks show that comes with its own match. The Bulldogs outlasted the Golden Lions in a classic nail-biter, winning 40-33.

Alabama A&M opened up the scoring with a field goal on the opening drive. On the first play from scrimmage Aqeel Glass connected with Zabrian Moore for a 54-yard reception. Later in the drive, three straight incompletions led to Corey Spencer’s 29-yard field goal.

UAPB responded on the ensuing possession with Josh Wilkes returning the kickoff 35 yards for field position near midfield. Quarterback Skyler Perry picked up a 10 yard rush and later found Wilkes for a 17 yard reception. Mattias Clark finished off the drive with a four yard touchdown run to put UAPB up 7-3.

Glass and Moore connected for more magic when the AAMU offense got back on the field. Moore beat two defenders to the spot in the endzone when Glass dropped a perfect over-the-shoulder pass from 30 yards out. The PAT put AAMU up 10-7.

The celebration didn’t last long because Tyrin Ralph scooped and scored the kickoff with an electrifying 81-yard return. UAPB reclaimed the lead 14-10.

Both offenses cooled down for the remainder of the first quarter, exchanging punts back and forth. Early in the second quarter, AAMU put together another scoring drive aided by a roughing the kicker call. Instead of an air attack, AAMU got it done on the ground. Gary Quarles rushed the ball five consecutive times, culminating with a three-yard touchdown. A missed PAT put AAMU up 16-14.

Points come from any and every where

UAPB marched right back down the field for a score from an unlikely source. Skyler Perry had his helmet knocked off while scrambling down at the five-yard line. Taylor Holston came in to replace him because by rule players must sit for one play when losing their helmet. Holston came in and fired a five-yard touchdown to DeJuan Miller for the score. But the following PAT was anything but typical. The kick was blocked and returned by Ja’Maria Green for a two-point conversion. When the smoke cleared on the drive UAPB was leading 20-18.

The defenses weren’t done making their mark on the game. Aqeel Glass was sacked on the next drive and dropped a costly fumble. Kolby Watts picked it up and returned it 33 yards for a score. After a failed two point conversion, UAPB was up 26-18.

The third quarter belonged to Alabama A&M after Glass and the offense apparently found the tight end at halftime. Anthony Howard hauled in a seven yard touchdown midway through the third quarter to retake the lead. It was the culminating play that was part of a 12 play 79 yard drive to pull AAMU to within one point.

After a UAPB punt, AAMU drove down the field scoring on an eight-play 80-yard drive. Gary Quarles finished the drive off with a three-yard touchdown rush to put AAMU up 32-26.

Glass continued to show that he had a variety of tricks in his bag in the fourth quarter. The quarterback known for his passing pulled the ball down and ran for 15 yards midway through the fourth quarter. Instead of sliding he fought for extra yardage and was upended by a UAPB defender. He immediately bounced off the grass and imitated a referee’s first down symbol that ignited his team and the crowd. One play later he found Zabrian Moore for a 13-yard touchdown, with AAMU going up 40-26 over UAPB.

After a Skyler Perry interception, UAPB got another possession after AAMU turned the ball over on downs. UAPB went into its two-minute offense with five minutes to go in the game. The Golden Lions put together a 72-yard drive in 11 plays. Perry found Wilkes for an 11-yard touchdown pass to cut the lead down to 40-33. UAPB elected against an onside kick and gave AAMU the ball back on a touchback.

UAPB forced AAMU to punt on the next possession and got one final shot at a chance to tie the game with 48 seconds. Perry was just inches away from hitting an open receiver in the endzone before throwing a game-ending interception with 8 seconds remaining.

“Just a great feeling with COVID and all the adversity. We withstood it all. We didn’t play our best offensively in the first half. Aqeel had to settle down and make some throws,” head coach Connell Maynor said after the game.

“You got to have a great quarterback, I’ve got one and I’m reaping the awards.”