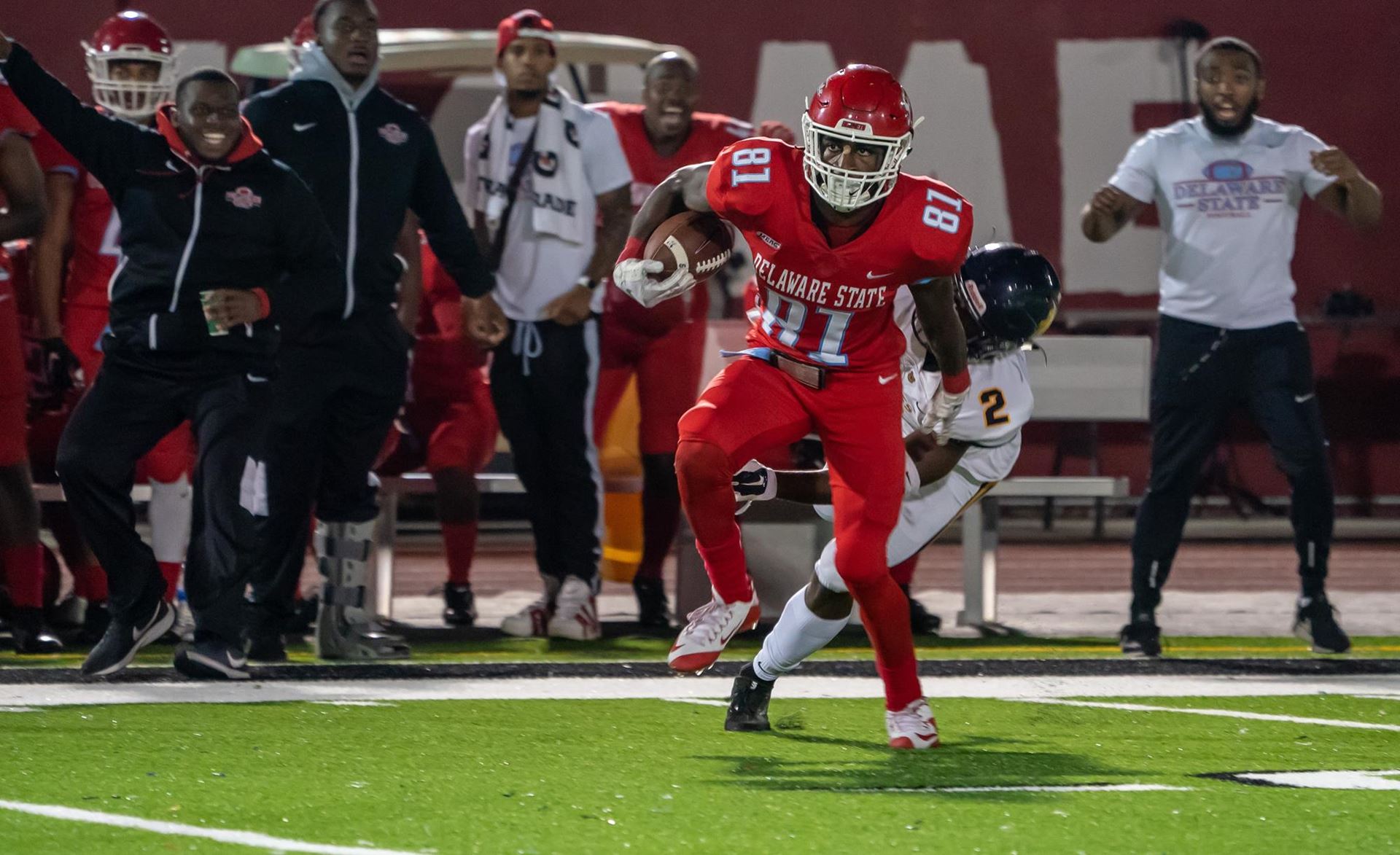 Delaware State exorcised a lot of demons on Saturday. By sweeping Howard, DSU finally won a game on the road for the first time since the Obama Admin.

Washington, D.C. (Apr. 3, 2021) — Delaware State rushed for 217 yards and a touchdown, while Jared Lewisconnected with Trey Gross for three scoring passes to lead the Hornets to a 37-28 victory over Howard at HU’s Green Stadium today to complete a two-game sweep of the Bison this spring. The win also snapped a 34-game road losing streak for DSU dating back to the 2014 season.

Freshman running back Sy’veon Wilkerson rushed for a game-high 112 yards and a touchdown on 22 carries to lead the Hornets’ biggest rushing output since tallying 249 vs. Norfolk State during the 2019 season. Wilkerson’s run total was also the most by a DSU true freshman since Michael Chris-Ike ran for 127 vs. North Carolina Central in 2018.

Wilkerson scored Delaware State’s only other touchdown of the game on a one-yard run in the second quarter to give the Hornets a 17-6 lead. The scoring run capped off an 18-play, 88-yard drive that consumed eight-minutes-52 seconds. Wilkerson ran the ball on 12 plays during the drive, collecting 51 yards.

The Hornets were trailing 6-0 when Lewis and Gross connected on their first touchdown, a 42-yard pass with 3:37 left in the first quarter. DSU didn’t trail again in the game after the extra point kick by Jose Romo-Martinez gave the Hornets a 7-6 lead.

Lewis and Gross struck again on a nine-yard touchdown pass to cap off a six-play, 80-yard drive in the third quarter. The possession was also highlighted by a 23-yard pass from Lewis to tight end Myles Beverly, while Wilkerson ran for 33 yards on four carries during the march. The extra point by Romo-Martinez put DSU ahead 24-14 at the 9:06 mark of the third quarter.

Gross hauled in his third touchdown pass of the day, a 56-yarder, with 10:31 left to play to give the Hornets a 37-20 lead. He is the first Delaware State receiver with three touchdown catches in a game since Justin Wilson hauled in four, also at Howard in 2010.

Gross totaled five receptions for 123 yards in today’s game, his best performance since tallying six catches for a career-high 154 against Howard as a freshman in 2017.

Lewis, starting his second straight game after coming off the bench in the season opener, completed 10 of 19 passes for a career-best 173 yards. He was also second on the team with 38 rushing yards, including a long of 21.

Romo-Martinez was perfect on day, hitting each of his three field goal attempts and was four-for-four on extra point tries. He kicked a 43-yard field goal to give the Hornets a 10-6 lead in the first quarter. His second field goal, a 46-yarder, stretched the Hornets’ lead to 27-14 midway through the third quarter, and his third three-pointer extended DSU’s advantage to 30-20 early in the fourth quarter.

Saturday’s game marked the third time Romo-Martinez has booted three field goals. He also accomplished the feat against North Carolina Central in 2019 and Savannah State in 2018.