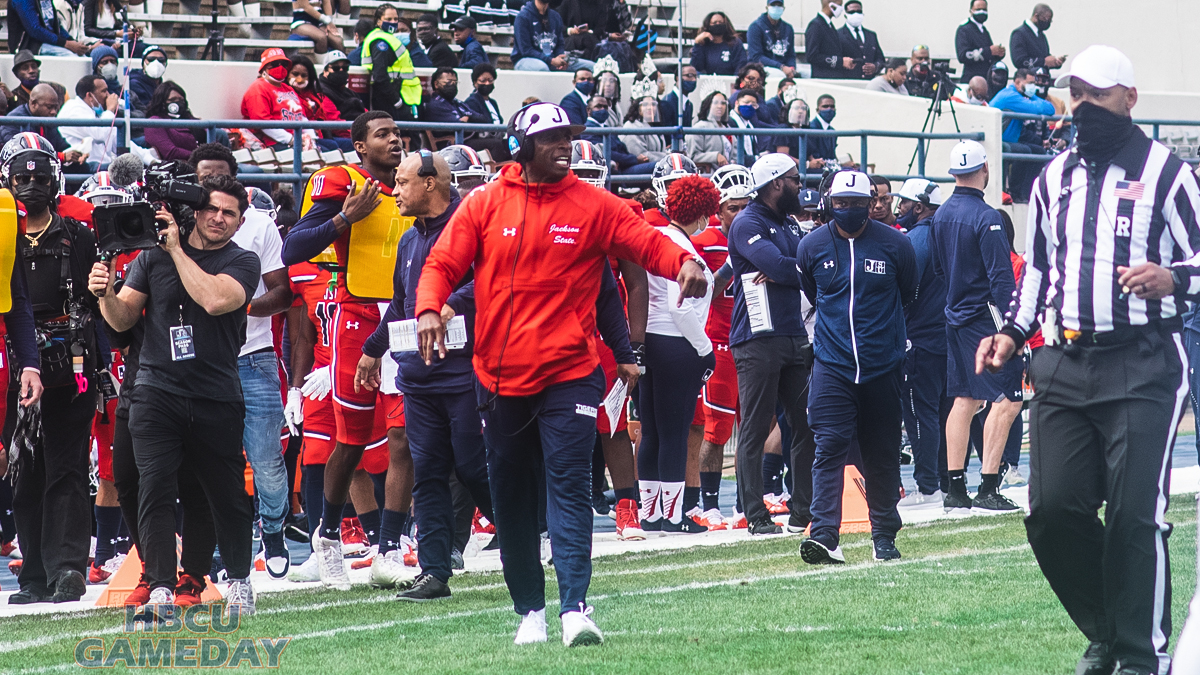 Deion Sanders and JSU moved up to ESPN2

The combination of Deion Sanders and playing football in the spring is paying off for the SWAC as Jackson State vs. Mississippi Valley will be on ESPN 2 on Sunday.

Deion Sanders and Jackson State are taking full advantage of spring football’s opportunity for TV spotlight.
Jackson State’s home matchup against in-state rival Mississippi Valley State has been flexed to ESPN 2. The game was originally slated to be on ESPN 3, but now it is set to be shown on TV according to ESPN’s listings.

SWAC Commissioner Dr. Charles McClelland said that his broadcast of the JSU-Grambling Game was disconnected a few times due to audience volume. He told Dr. Cavil’s Inside The HBCU Sports Lab that there was a chance one or more SWAC games could move up from streaming to television.

“My understanding is that the game between Grambling and Jackson State was so heavily watched that ESPN is now considering moving up some of our games on linear television,” he said. “And that’s when you know you are making a significant impact.”

JSU will enter Sunday’s game 2-0 after knocking off Grambling State in its SWAC opener on March 6. The game went down to the wire, and clearly got lots of folks interested.

Mississippi Valley State will be making its debut against JSU. Head coach Vincent Dancy is a JSU alumnus himself, and he acknowledged that playing his alma mater is a big deal. Especially this year, given the attention focused on Jackson.

“They want to show people who we really are,” he said on Monday. “This is the only opportunity that we’ll really have to show people who we really are when we’re national televised. So they understand that, from hearing all the critics, people burying us before they’ve even seen us. We’re already picked last again. So the only way we can prove a point is to be seen.”

The combination of Deion Sanders arriving at JSU and spring football has created a vacuum in which the SWAC will get a chance to showcase its product nationally like never before. That’s something that McClelland and the conference have been building towards since his appointment in 2018.

“Our goal is bigger than putting games on the internet,” McClelland said. “Our goal is to be able to get a linear package.”

And if the SWAC can pull that off, its members stand to benefit handsomely.

“If you do these things right, you’re talking tens of millions of dollars and that money goes back to our member institutions.”

Jackson State and Mississippi Valley will kick off from Mississippi Veterans Memorial Stadium on Sunday at 3 PM EST/ 2 PM CST.

Deion Sanders and JSU moved up to ESPN2