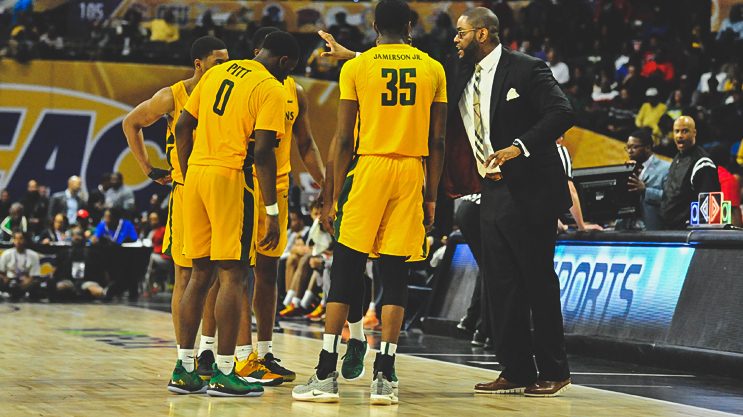 Robert Jones of Norfolk State is up for not one, not two but three national coaching awards after his team shared a piece of the MEAC north title.

He is one of 25 finalists for the Ben Jobe, Skip Prosser Man of the Year, and Hugh Durham Awards, handed out by CollegeInsider every year. The Ben Jobe Award is given to the top minority coach in Division I basketball. The Skip Prosser Award is bestowed upon a D-I coach who achieves success on the court and displays moral integrity off of it. The Hugh Durham Award is handed out to the top mid-major coach in the country.

Jones won the Skip Prosser Award in 2019. He has been a finalist for the Ben Jobe Award a total of four times previously from 2015-17 and again in 2019. He was also a finalist in 2019 for the Hugh Durham Award.

He led the Spartans this year to a 14-7 regular season record and a share of the MEAC Northern Division title at 8-4. He owns a 139-118 overall record in his eight seasons as head coach, including 92-32 in the league. Jones’ 74.2 winning percentage in conference games ranks fourth in the country among head coaches with at least five years at their current school.

Robert Jones is the only MEAC coach up for either the Skip Prosser or Hugh Durham Awards and one of three league coaches up for the Ben Jobe Award along with Will Jones of North Carolina A&T and Kevin Broadus of Morgan State.

The Ben Jobe Award is named after the former Southern head coach who made four NCAA tournament appearances and led the Jaguars to an upset of No. 2 seed Georgia Tech in the 1993 tournament. He went 209-141 in his 12 years at Southern while also coaching at Alabama A&M, Alabama State, Talladega, Tuskegee and South Carolina State.

The Skip Prosser Award is named after the former Wake Forest head coach who passed away suddenly in 2007 from an apparent heart attack. He was 291-146 in 14 seasons between Loyola (Md.), Xavier and Wake Forest.

Winners will be announced on April 1.