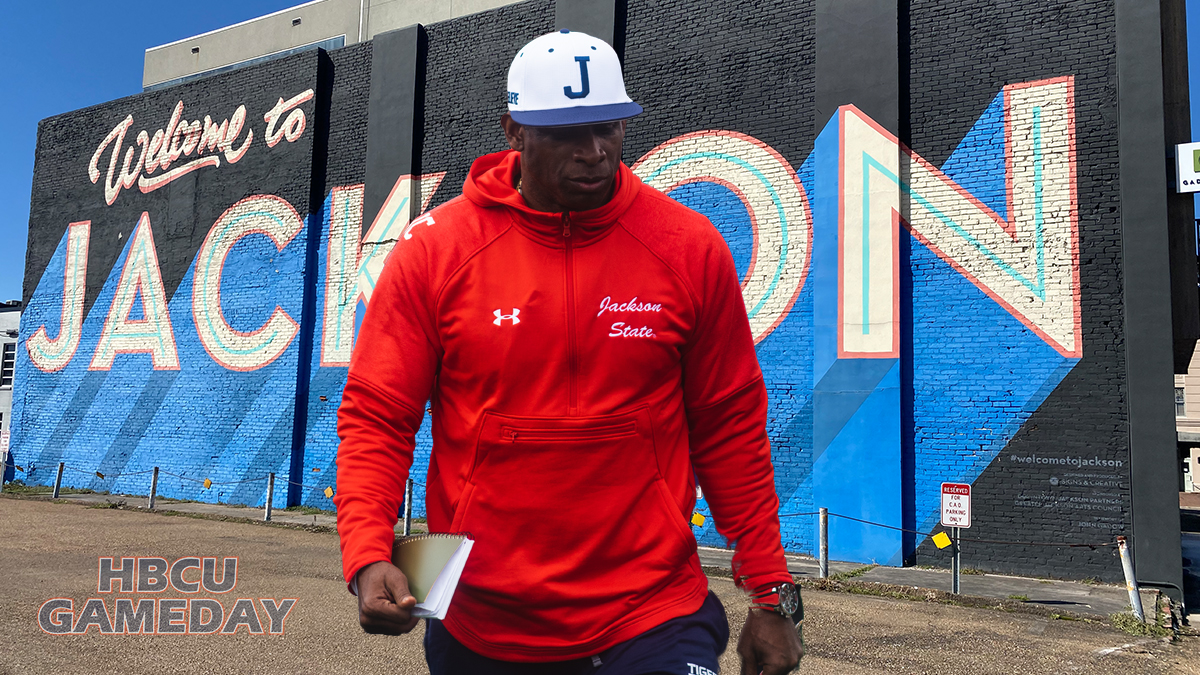 Deion Sanders and JSU a part of much bigger story

The debut of Deion Sanders brought a lot of media to Jackson State. But the city’s water crisis was a much more important story that many overlooked

A lot of headlines have come out of Jackson, Mississippi in the last six months have had to do with Deion Sanders taking over as Jackson State football coach.

So there was much anticipation for the third weekend in February when Sanders would live out his dream of becoming a head football coach. Never mind that this was a game in winter against an NAIA opponent (Edward Waters) in a spring football season that many people felt didn’t matter or shouldn’t count at all.

Sanders’ hiring had literally shaken up the HBCU football world, and reverberated beyond that. Sports Illustrated sent one of its national writers to the city to cover an HBCU game for probably the first time since the mythical 1984 Missississippi Valley-Alcorn State game. That game took place in the same stadium, Mississippi Veterans Memorial Stadium, that Sanders and JSU were going to make their debut.

And the media was so wrapped up in covering the spectacle of Sanders, that it largely ignored the most important story in Jackson. And not only in Jackson, but around the south, particularly in areas that are home to the SWAC.

It was me. I was the media.

My first visit to Jackson, Mississippi was a dizzying one. I took the 10 hour trip from my door to the Capitol of the Magnolia State along with Lut Williams, Editor of the Black College Sports Page, and his grandson Muhammad. We weren’t 100 percent sure we were going until Saturday morning, about 26 hours before game time. Partially because we weren’t sure there would be a game.

The preceding week had brought true winter weather to the Deep South, a region of the country that sparsely gets it. It brought along with it power outages, treacherous road conditions, and in many places, a water access issue. Jackson, Mississippi was one of those places.

Knowing the game was going to happen and wanting to be there to properly document history, we shot down I-85, hit I-20 in Atlanta and kept on trucking to Jackson. When we arrived to pick up our credentials, everyone at the stadium was working feverishly to get ready for the big game. We were greeted warmly by folks making last-minute adjustments to prepare for the first game in the stadium in nearly 15 months. We now know that many of them likely did not have running water. The combo of factors limited Jackson State to just one practice all week.

A quick chat with the hotel workers where we spent the night revealed that all rooms were booked. Not because of Deion Sanders and Jackson State, but because many people didn’t have power, and most didn’t have water.

Thankfully, our hotel did have water on that Saturday night, though the pressure was noticeably low.

The next morning we packed up and drove downtown toward’s JSU’s campus. The city was quiet. It was Sunday morning, after all.

We found our way into the motorcade leading the football team through the city to the stadium. On a normal Gameday, you could imagine the streets being full of folks hustling and bustling their way towards the tailgate area and possibly into the game. But this was anything other than normal. Again, we were going to watch a football game in late February.

The first thing I noticed when I walked in the stadium was a column-sized poster detailing JSU’s proud football history with the year of every SWAC Championship it has won etched into the graphic. It was literally picture perfect, except the fact that there were port-a-poties in front of it.

As I made my way throughout the stadium, at the same scene stood in front of a poster highlighting the four Pro Football Hall of Famers from JSU — Lem Barney, Jackie Slater, Robert Brazile and, of course, Walter Payton. I won’t lie, the photographer in me was disappointed.

Things picked up after that. COVID-19 testing to get on the field. Troy Aikman showing up. The game on the field. The J-Settes and the Boom in the stands. The first home HBCU football game anywhere since 2019. And, of course, the postgame presser and all the media blitz that followed.

Meanwhile, much of the city, including JSU’s campus, was in bad shape. By the time the game reached its end, more than 10,000 households did not have electricity. And many people were left with poor water pressure if any at all.

Laura Lewis is a Jackson State alumna and president of the JSU Charlotte Metro Alumni Chapter. The chapter routinely raises scholarship funds to send students from North and South Carolina to JSU, so she stays plugged in.

“Our band students, they played during that game, but they went back on campus to no water,” Lewis said. “So we got wind of that about Tuesday, and that’s when we stepped right in.”

Lewis spoke with a manager at the local Hilton to book rooms for the students, allowing them to take showers, wash clothes, and relax as the city tried to get things right.

“It’s not the university, it’s the city of Jackson. They have some of the older infrastructures that is just not up-to-par so they’ve had water main breaks,” Lewis said. “Jackson State is in the heart of the south and the west side of Jackson, where, of course, a lot of  African-Americans live. And so we are normally, like in any city, the last area that gets attention.”

The debut of Deion Sanders was undoubtedly a big deal media-wise. On the field, JSU was expected to pound on Edward Waters. Many who follow HBCU football weren’t particularly impressed, but Alabama A&M coach Connell Maynor watched and said JSU looked solid.

“I saw Jackson, and Jackson looked good,” Maynor told the Clarion-Ledger. “They did what they were supposed to do and beat them 53 to zip. I thought they looked good in their first game in coach Sanders’ first game coaching.”

Especially when you consider they only practiced once all week prior to the game.

A few days ago I wrote about how HBCU football matters, even in the spring. And it does. But water access matters much more. Nearly two weeks after the storm, many residents are experiencing low-to-no water pressure. And some of those who are say they are seeing sediment come out of their pipes. While sports in general and football, in particular, is a much-needed diversion from the issues going on in our world, they are not immune from them.

“The Deep South, they really got it (the weather),” Lewis said. “It is a wake-up call. Our schools are in the heart of mostly African-American communities, so we have to be the ones that rally with the city and work with the city.”

I came to Jackson knowing there would be a story. I left thinking I knew the story. But clearly the most important question in Jackson in recent weeks isn’t whether Deion Sanders and Jackson State can climb the mountain, or what happened in the locker room after the game. It has been and continues to be when the water will get back to normal. The answer for many in the city is clearly, not soon enough.

Deion Sanders and JSU a part of much bigger story