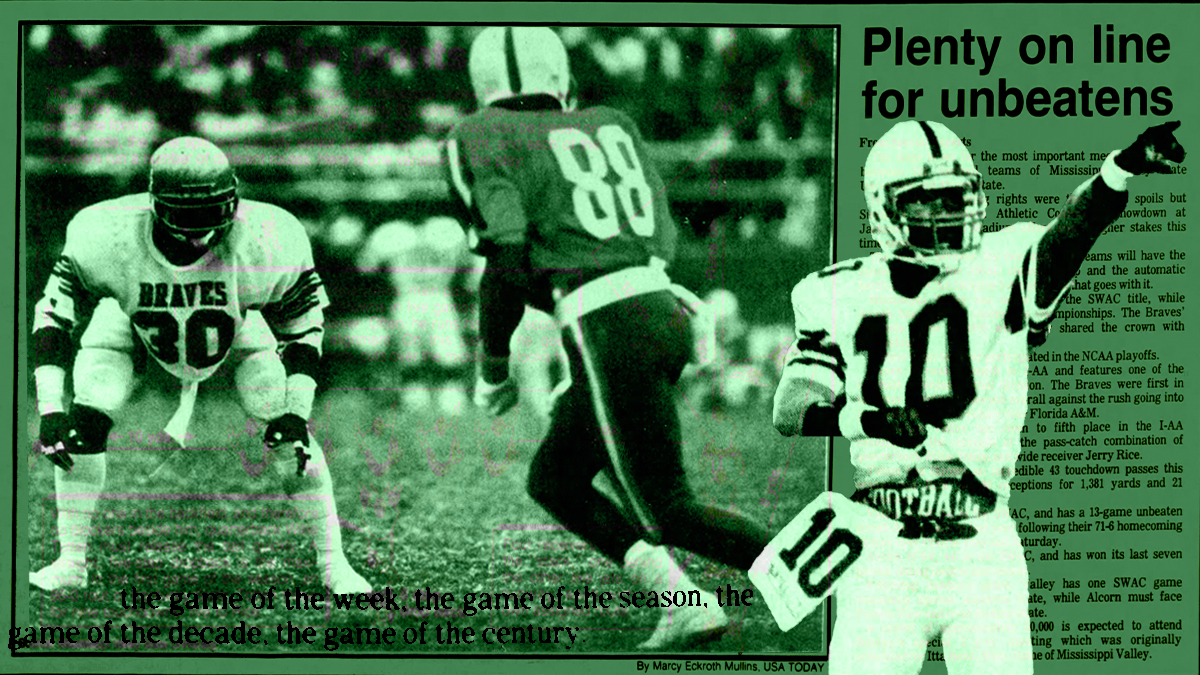 Mississippi Valley, Alcorn State and The Game of The Century

Nearly thirty five years after it was played, the 1984 Alcorn State-Mississippi Valley game remains one of the most important in HBCU history.

The year was 1984. Michael Jackson was still riding high on Thriller. The Purple One was having women dip themselves in the Waters of Lake Minnetonka. Li-Nell Richie had been officially replaced by Li-on-el Richie and the very first millenials were toddlers.

In the sports world, a rookie from Wilmington, NC was trying to establish himself in Magic Johnson and Larry Bird’s NBA with a pair of gaudy red-and-black sneakers that would soon be banned.

Simply put, it was a different era.

One thing that was true then is still true now, and that is that football was and is king in the South. When it came to HBCU football, the SWAC had long worn the crown ahead of its elders in the CIAA and SIAC and its struggling Division I-AA partner the MEAC. Most years it was Grambling or Jackson State battling for SWAC supremacy. But this year was different.

The Soul Patrol vs. Phi-Lookem-Jukem

Alcorn State entered its yearly grudge match with Mississippi Valley ranked fourth in D I-AA football, thanks mostly to its rugged defense, which hadn’t allowed more than 16 points in a game all season. ASU’s defense was ranked second in the country, led by senior defensive back Issiac Holt, who already held the NCAA career mark in interceptions. It relied on a run-first, pass-second offense that that averaged 436 yards per game.

“The emergence of Alcorn’s offense and its ability to control the ball and take time off the clock will limit Mississippi Valley’s scoring opportunities,” Jackson State coach W.C. Gorden told the Clarion-Ledger before the game.

That offense was good for 44.3 points, second in the country. And in the SWAC. And in Mississppi.

Mississippi Valley State entered the game ranked fifth in the nation thanks to its high-octane offense. Tabbed Phi-Lookem-Jukeum, Valley’s offense was being referred to as “The Offense of the 1990s” in the mid-1980s. Looking back, it was even more ahead of its time than that. Heading into the matchup with Alcorn State, Valley was averaging 64.1 points per game and a devilish 666.6 yards per contest.

The bulk of Totten’s work went to one Jerry “World” Rice, who set single-game records with 294 yards and five touchdown catches against Kentucky State in the opener. His 21 touchdown catches was already a new single-season record and he had broken the career receptions record with 4,384 yards, topping former Howard star Tracy Singleton’s record.

But Rice was far from Totten’s only target. Joe Thomas’s 66 catches for 934 yards would have led D1-AA football if not for Rice. Three other receivers entered the Alcorn game with five touchdowns or more. Simply put, this offense was LETHAL.

Legendary reporter Roscoe Nance, then beat writer at the Clarion-Ledger wrote a piece on Sept. 28 called “Stopping Valley: Set Up and Pray,” in which he asked how to defend the Delta Devils.

It wasn’t just SWAC or HBCU folks who were interested in watching these two small Mississippi HBCUs battle. The game was originally scheduled to take place at Mississippi Valley’s 10,000 seat on-campus stadium on Nov. 3. Demand for the game caused it to be moved to Mississippi Veterans Memorial Coliseum, the largest venue in the state. The contest would be held in the 62,000 seat stadium on Sunday instead of Saturday. More than 130 press credentials had been requested prior to the game, according to MVSU sports information director.

Indeed the game would be broadcast on WLBT television and covered by the likes of Sports Illustrated.

We’re very excited about this game,” Frank Melton, WLBT general manager told the Clarion-Ledger. “We think this is perhaps the biggest college game in a decade in the state of Mississippi, and we are very pleased to bring it live.”

Having the game broadcast live on television was major, but it wasn’t exactly an easy sell. Both Alcorn State’s Dr. Walter Washington and Valley’s Dr. Joe Boyer waited until Friday to consent to the broadcast, once it realized the game was likely to sell out. The TV station sweetened the deal by giving both schools a full four-year scholarship while allowing it TV time initially reserved for the NFL.

Most years in SWAC football, even a game with as much on the line as Valley and Alcorn had at stake, wouldn’t sniff this type of attention. But all the ingredients came together at the perfect time. Ole Miss, Mississippi State and Southern Miss had combined for just eight wins all season. Meanwhile here were these two small black colleges, both of whom lived in the shadow of Jackson State, with flashy offenses, dominating defenses and future NFL players. Not to mention they were coached by two larger-than-life coaches.

Alcorn State’s Marino Casem, AKA “The Godfather,” was the graybeard here. He’d been at the helm at ASU since the Civil Rights Era. Despite playing in the shadow of programs like Grambling and JSU, he’d been able to win a few titles and keep his teams in the mix.

And then there was Archie Cooley. The Jackson State alumnus was technically a defensive guy– he served as a defensive coach at his alma mater and Tennessee State– but his “Devil May Care” attitude on offense is what led Nance to tab him “The Gunslinger.”

“What I’m doing is going against the rules of football,” Cooley told Nance. “I have the guts to stick with it. You have to believe in what you do and it well.”

“We’re daring. We throw the ball when we’re not supposed to throw. I think I could make a good poker player. I take chances.”

In the end, the game pretty much lived up to the hype. A crowd of 63,808 fans packed into the vulnerable stadium for a complete show from the football to the marching bands.

There was an offensive explosion in the game, but it didn’t come from Cooley’s Delta Devils. The Braves put up 526 yards on their opponents, 211 of them from running back Perry Qualls who scored a school-record five touchdowns.

“I expected to get the ball a lot,” Qualls told the Clarion-Ledger after the game. “We had eight plays in our game plan. Seven of them called for me to get the ball and one was for the fullback.

Qualls’ big day helped Alcorn State control possession for 38 minutes and 40 seconds, leaving Valley just 22 minutes and 20 seconds. Normally that would be enough, but Alcorn’s defense was unlike any Valley had faced that season.

The biggest star on that Sunday turned out to be Issiac Holt. He shadowed Rice, who caught eight passes for 134 yards and a touchdown, but both were well below his average. Holt proved his NFL future that day, picking off Totten and scoring the touchdown that pretty much put the game out of reach even for Valley’s high flying offense.

“Somebody said he’s all-world, so if you shut him down, you must be all-universe,” Holt told reporters after the game. He would go on to have a solid NFL career with the Minnesota Vikings and Dallas Cowboys, whom he helped win Super Bowl XXVII.

It was a sweet victory for Alcorn State, who felt it didn’t get the media coverage it deserved prior to the game.

“Mississippi Valley got all the publicity and hype, but they are going to have to come to Alcorn now,” Casem said. “We’ve got the better team….and a prettier campus.”

More than who won or lost the game, the national attention garnered by the game stands out as a memorable moment nearly 35 years later. Even today, with national television, streaming, 24 hour sports media and social media, the Alcorn-Valley game likely still stands as a benchmark for a regular season contest between two HBCU schools. Forcing a game into a venue six-times as big and packing it out is something that will likely never be seen again in today’s world of highlight packages and live streams.

“Call it what you want, it was an epic,” Casem said. “People wanted a show and they got a great one. It couldn’t have been any better.”

Mississippi Valley, Alcorn State and The Game of The Century