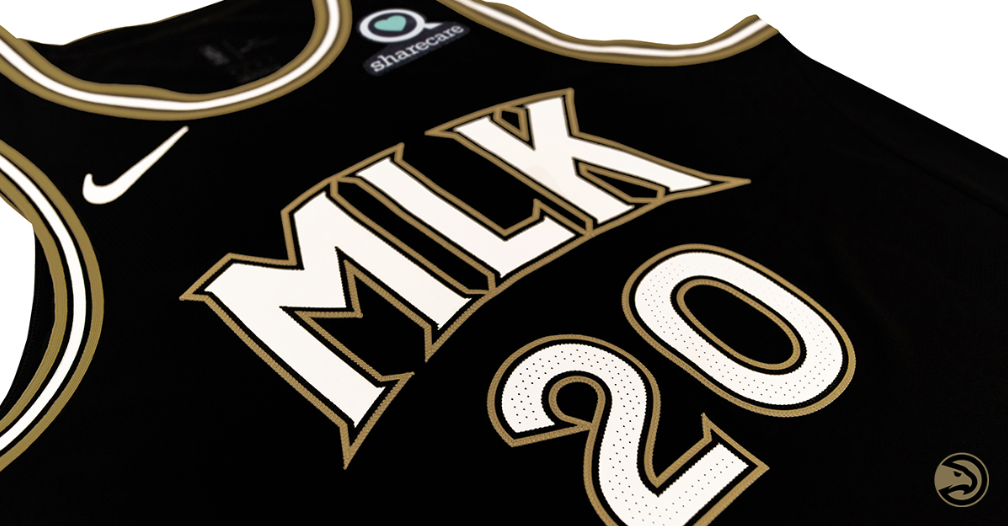 For the first time in the league’s history, the initials of an individual will be featured prominently on the chest of an official NBA game uniform. The Hawks will be donating profits from the jersey sales back into the Atlanta community to help further initiatives championed by Dr. King.

Born and raised in Atlanta, Dr. Martin Luther King Jr., became a global symbol of the fight for racial equality through his platform of non-violence. He attended his hometown’s historic Morehouse College, entering as a freshman when he was just 15 years old.

While he continued to call Atlanta home, raising his family and pastoring at local churches like Ebenezer Baptist with his father, Dr. King led initiatives that caught the attention of a worldwide audience, including the Montgomery Bus Boycotts, the Southern Christian Leadership Conference, and the March on Washington. The latter is where he made his watershed “I Have a Dream” speech, playing a significant role in his being awarded the Nobel Peace Prize in 1964. His life and leadership were cut short at age of 39 by an assassin, as he organized for the rights of sanitation workers in Memphis.

“It is an incredible privilege to be able to represent the legacy of Dr. King, one of Atlanta’s native sons and one of the nation’s most transformative leaders. His message of equality, non-violence, and justice is as relevant today as it was in the 60s and we are proud to not only help educate legions of young fans about Dr. King’s work, but empower them to pick up his mantle and embody the change they wish to see in their communities,” said Hawks Chief Marketing Officer, Melissa Proctor. “We are honored that the King Estate would entrust us with these powerful initials.”

Deeply connected to the tenets of Dr. King’s social activism are the roots from which the Atlanta Hawks’ own civic work grows. The team has a well-demonstrated commitment to building bridges through basketball to help better the community. The Hawks’ ongoing efforts in addressing food insecurity, access to early voting, and entrepreneurial development are directly tied to crucial issues on which Dr. King focused, including racial equality, voting rights, and economic justice. In a franchise first, profits from the sale of the groundbreaking jersey will be given to programs that help to continue Dr. King’s work regarding economic empowerment for communities of color.

“We were honored to learn of the Atlanta Hawks’ desire to pay homage to Dr. King’s life and legacy by using him as the focus of their 2020 – 21 MLK Nike City Edition uniform design. During this challenging climate, it is our hope that this visual reminder of Dr. King’s legacy will inspire people to further educate themselves on how he affected change using his philosophy and methods of nonviolence during the civil rights movement of the 1950s and 1960s. We look forward to continuing to work with the Hawks to perpetuate his wonderful legacy,” said Eric D. Tidwell, Esq., Managing Director & General Counsel of Intellectual Properties Management, Inc., (Manager of the Estate of Dr. Martin Luther King, Jr.).