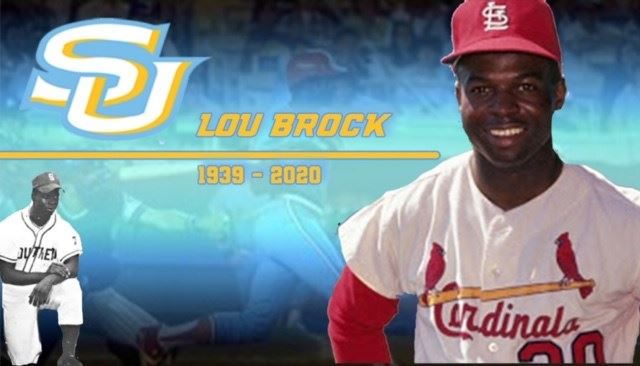 Baseball legend Lou Brock was one of the greatestkt players from an HBCU. The Southern University alumnus has passed away.

BATON ROUGE, LA – One of the most iconic figures in the history of Southern University athletics, and Major League Baseball Hall of Famer, Lou Brock passed away in his home Sunday afternoon.  He was 81.

Brock, the left fielder for the Jaguars cemented his place in Jaguar baseball lore when he launched a three-run homerun over the outfield wall, sending Southern to an eventual 10-2 win and a claim to the 1959 National Association of Intercollegiate Athletics (NAIA) National Championship — the first African-American team to ever earn such a title.

Brock played a total of 19 MLB seasons, including 16 seasons with the Cardinals. During his time in St. Louis, Brock finished in the top-25 of voting for the National League MVP for six straight seasons. He started his career with the Chicago Cubs before the club traded him to the Cardinals in the middle of the 1964 season. A two-time World Series champion with St. Louis, Brock hit. 300 with five RBI to help the Cardinals beat the New York Yankees in seven games in the 1964 World Series becoming the first player from an Historically Black College & University (HBCU) to win a World Series.

In an MLB career that spanned from 1961-1979, Brock became known as one of baseball’s most complete players. A speedster  on the base paths, Brock retired as the all-time league leader in stolen bases (938). He surpassed Ty Cobb’s stolen base mark of 892 during the 1977 season. From 1966 to 1974, Brock led the National League in steals every season except for one. His record would stand until 1991 when Rickey Henderson became the new stolen bases all-time leader.

Brock retired in 1979 as the single-season and all-time leader in stolen bases; marks since surpassed by Rickey Henderson.

The El Dorado, Arkansas native ended his 19-year career with 3,023 hits, 149 homers, 900 RBI and a .293 batting average.  He was elected to the National Baseball Hall of Fame and Museum in 1985 in his first year on the ballot—becoming the first player from an HBCU to be enshrined into the Hall.