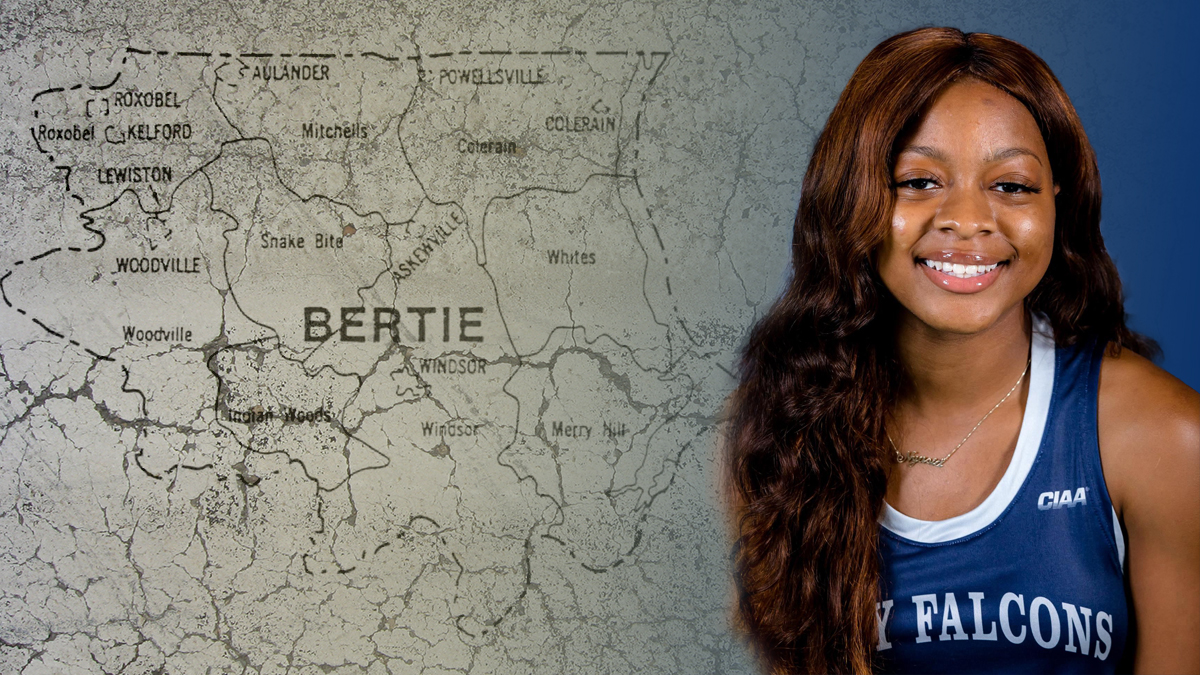 Nyasia Barnes’ family was spared by Hurricane Isaias. Many of her Bertie County neighbors, however, were not as fortunate. So she’s pitching in.

Now, she wants others to help as well.

A member of the Lady Falcons basketball team, Barnes is spreading the word about the Bertie County YMCA Hurricane Relief Program. The YMCA, located in Windsor, N.C., is asking for donations such as men’s and women’s clothing (all sizes), paper towels, tissues and non-perishable items in addition to hand and big towels.

“This situation really touched me because this involved the people I grew up with,” Barnes said. “I had never seen a storm like that.”

Barnes has already donated clothes to the Bertie YMCA. She hopes that folks are moved enough to do the same. Items can be sent to Bertie County through the Saint Augustine’s University women’s basketball program. The Bertie YMCA leaders are also willing to pick up donations in Raleigh.

The donation drop-off has special meaning for Barnes, who is from Bertie County. A Merry Hill, N.C., native, Barnes was home when Hurricane Isaias struck two weeks ago. She says the storm knocked down trees in her hometown but it was nothing like other parts of the county.

The hurricane spawned a tornado that hit the county. A least two people died and many folks were injured after the tornado devastated a mobile home park and destroyed numerous homes, leaving people homeless. Debris was everywhere.

Storms in Eastern North Carolina are known to pack a punch, but the trail of damage from the hurricane even shocked Barnes.

“This is about the worse I have seen since living here,” Barnes said. “It usually floods bad, but nothing like this.”

Barnes and her family avoided much of the devastation. She worried about relatives and friends, however, as they caught the full brunt of the storm.

“Everybody was posting and re-sharing pictures on social media,” Barnes said. “It was sad to see a lot of people that I grew up with lose their things. To know someone who had graduated from high school and was preparing to go to college, who lost everything, that was sad.”

After the storm passed, Barnes immediately sprang into action.

“I saw people posting about donating to the Bertie County YMCA,” said Barnes, a psychology major. “The idea of donating came from everybody wanting to help. If anybody has anything they don’t use anymore, the YMCA can use it. People are in need.”

Among the first people she reached out to was Montel Jones, the SAU Head Women’s Basketball Coach. Jones, also from Eastern North Carolina, immediately drove to Windsor and gave items to the Bertie County YMCA.

“She is a really sweet and dependable person in addition to being a really good student-athlete and hard worker,” said Jones, a Kinston, N.C., native. “Her teammates know they can call her if they need a ride or if they are hungry.”

“She loves her community,” Jones added. “She will do anything to give back.”

YMCA Director Casey Owens says Bertie County is a tight-knit community and Barnes is a reflection of that. When Jones contacted him about the relief program, Owens immediately knew it was Barnes who initiated the call.

Owens is not surprised that Barnes is a supporter of the hurricane relief program. She always wants to help people.

“She comes from a good background,” Owens said. “She always shows respect. You can tell her and her brother are raised on great qualities and character.”

“She is one of the bright spots in the community, and there are many like her here in Bertie County,” Owens added. “I am really proud of the young adults for stepping up.”

Her caring traits come from her parents Kristie and Charles, and living in Bertie County.

“We are all one big family,” said Barnes, a CIAA Women’s Basketball Rookie of the Week winner last season. “Everybody knows everybody and we try to help each other because we are all we got.”