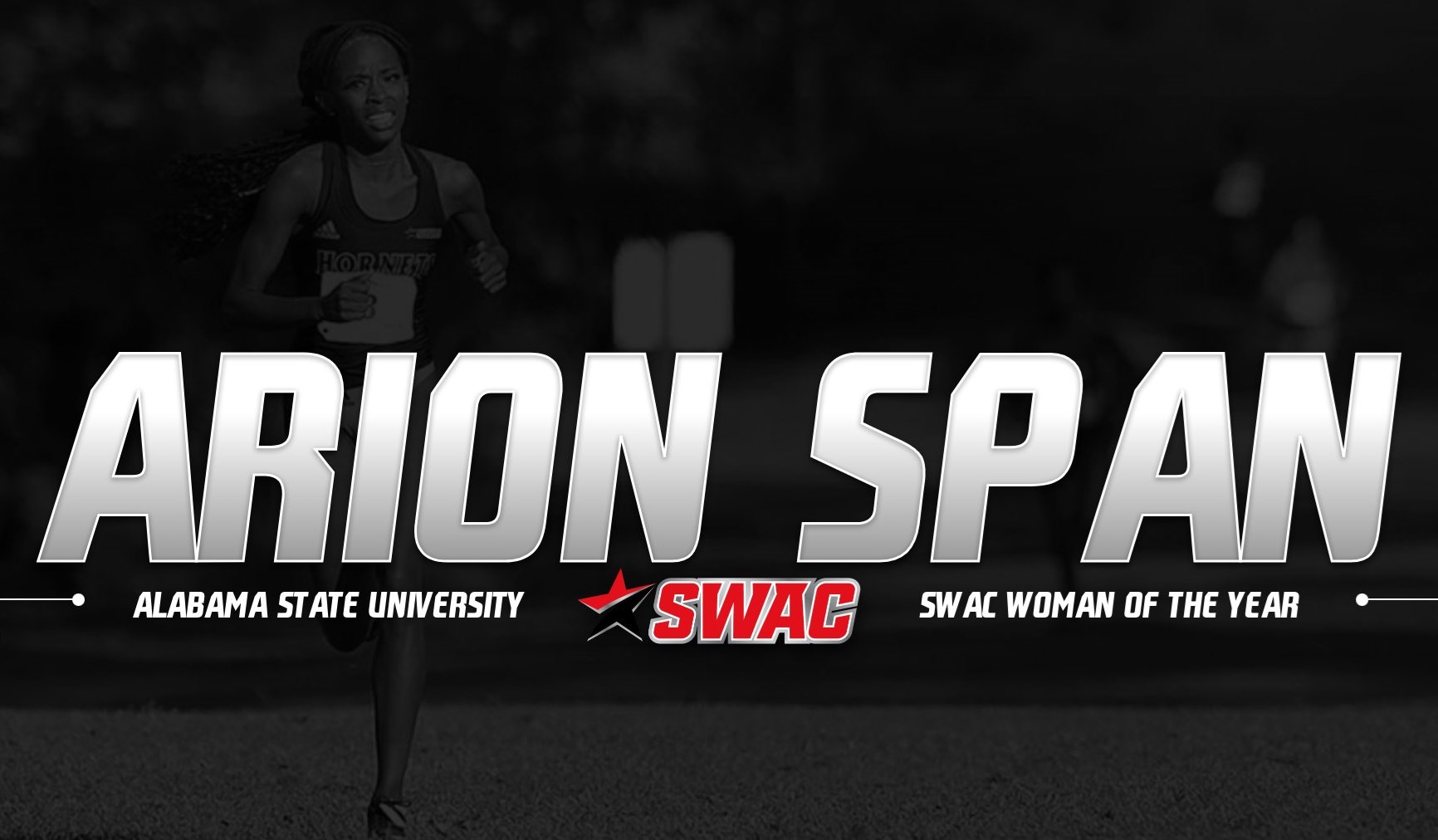 With her selection Span will now move on as the conference nominee for the 2020 NCAA Woman of the Year award.

BIRMINGHAM, Ala.- Alabama State University women’s cross country and indoor track and field student-athlete Arion Span has been named the 2020 Southwestern Athletic Conference Woman of the Year. Span was selected based on the recommendation of the SWAC Woman of the Year selection committee which consist of four league Senior Woman Administrators (SWA). With her selection Span will now move on as the conference nominee for the 2020 NCAA Woman of the Year award.

Woman of the Year

“Arion Span exemplifies all of the core values and principles that makeup a conference Woman of the Year finalist,” said SWAC Commissioner Dr. Charles McClelland. “Through her athletic and academic success, along with her service to the community she has represented the Southwestern Athletic Conference and Alabama State University at an extremely high level. She is truly deserving of this honor and we couldn’t be more excited to put her name in the record book amongst the list of all-time winners of this prestigious award.”

During her collegiate career she earned first-team honors in cross country each season in which she competed, while also qualifying to participate at the NCAA Regional. She was named the 2017 SWAC Indoor Track and Field Most Outstanding Athlete with her performance at the event

“Arion epitomizes what it means to be a student-athlete and the holistic approach we take at Alabama State,” said ASU Director of Athletics Jennifer Lynne Williams. “She never backs down from a challenge and is always at the forefront of volunteering for the university. To be able to do the things she does away from school, maintain her academic status, and earn championships speaks volumes to her work ethic.”

“Life as a student-athlete has set the tone for my future,” said Span. “Running for over 10 years has opened various doors, and I took advantage of every opportunity. As an athlete, you are taught more than sport. Aspects such as time management, leadership skills, teamwork, and determination are all characteristics that sports embed in you. To be successful, an athlete needs versatility, discipline, hard work, and passion for their perspective sport. Athletics has taught me to intertwine the two to compete at the highest level possible.”

Two Time Student-Athlete of the Year

“For me to effectively prepare for the future I have to plan,” said Span. “At the start of my collegiate career, I mapped out the steps it would take for me to become a physical therapist. One of my short-term goals was to graduate and I did that to become a first-generation college graduate. Another short-term goal was to get accepted into graduate school, and I was accepted on March 25 (2020) at Alabama State University.”

Span’s success at ASU does not end with her athletic and academic achievements as she built an equally impressive resume of community service during her four years at Alabama State. She was a member of the Student-Athlete Advisory Committee (SAAC) for two years as a team representative (2019, 2020), the elections committee chairwoman for the SGA (2018-2019), a member of the ACES My Hornet Mentor program (2018-19), a Golden Ambassador (2019-20) and served on the education committee for the NAACP (2017-19).

“My experience as a student-athlete has molded me into the person I am today,” said Span. “Being in the position of a leader comes with its ups and downs that prepare you for life outside of college. I am proud to have taken part in the classroom, school, and community.”