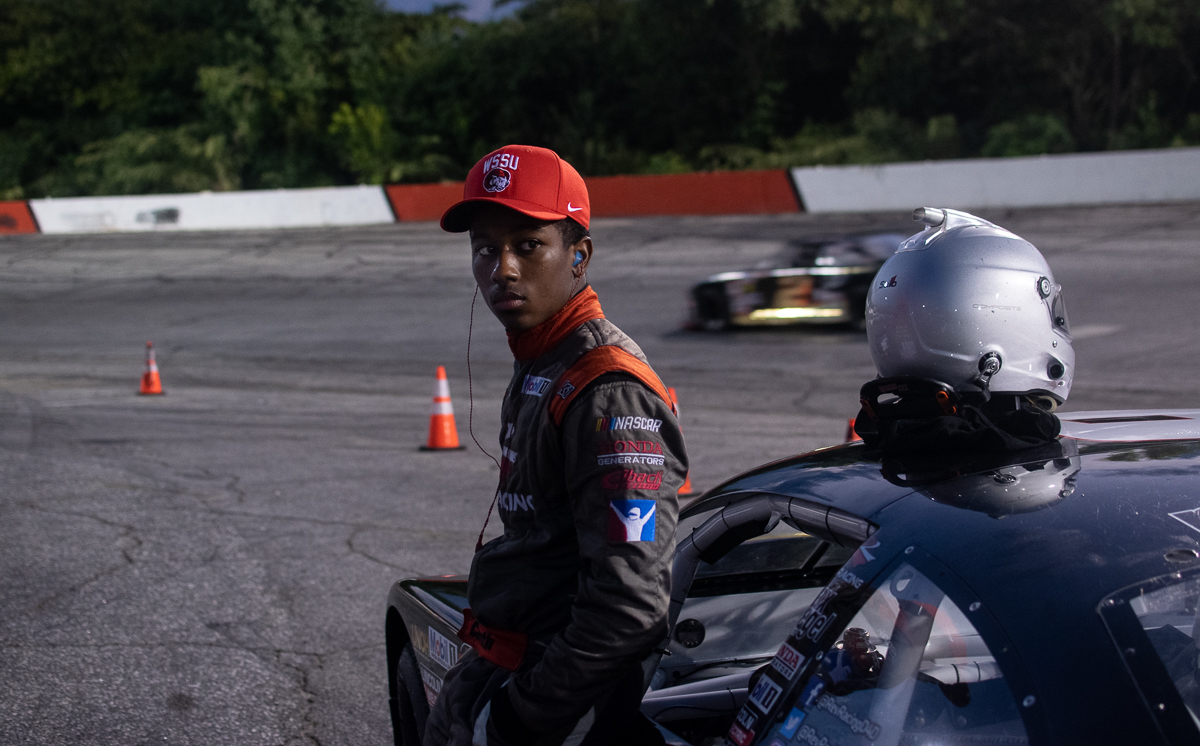 The sun is gone now. Somewhere in Tennessee, probably. Gone are Rajah’s AirPods as well. It’s time to get down to business.

Rajah has 40 laps left for the night. And this time, his no. 6 car is in the front of the pack— second in the pole —  as the cars go out for their final run.

Standing beside his father as the engines revved, I asked him how he felt every time his son got behind the wheel of a steel speed demon with other, more seasoned drivers.

“You kind of get used to it,” he said. “This is his first time in the front, though.”

Meanwhile, I just met the kid an hour ago and my stomach is turning.

The pace car leads the way onto the track, and the cars are off into the night.

The race is over. Rajah Caruth finishes eighth again, but this time he’s visually irritated with his performance. His chief gives him a breakdown, and he soaks it all in. It’s evident that he’s harder on himself than everyone else is. That’s a key element to success.

While many of his future classmates and friends are in Winston enjoying their newfound freedom, Caruth is on the track with me posing for photos. He’s compliant, but its clear he’s replaying the race in his head. I snap a couple of photos, confirm that we’re good, and before I know it he’s leaping over the 2.5 foot stone wall between the track and pit road.

Rajah Caruth is a long way from the cup series, but it’s clear he’s on the right path. He’s already achieved plenty at 18. He’s gone from racing virtually to in reality, and by all accounts, he’s getting better every week. But like any good driver, he’s not spending too long looking in his rear-view.

This week will be another chance to get adjusted to his new normal. He’ll be in Winston for “Ramdition” a week-long welcome to WSSU for freshmen that includes workshops, seminars and social events.

It’ll be an exciting, fast-paced week for the Class of 2024. But Caruth won’t be there on Saturday when the class has their “Lambs To Rams” ceremony through the school’s ancient stone arches. He’ll be in South Carolina at Myrtle Beach Speedway, perfecting his craft at “Sun Fun.”

“We’re gonna kill it next week,” he tells a crew member as they give each other a pound.

I watch Rajah Caruth walk off into the night, into the darkness of a future that has endless potential. There’s a lot on his youthful shoulders. He’s still learning the game but has the potential to be a game-changer. No doubt he has the drive, the determination, and the passion to make it happen.

I head home excited about his future as he pursues his dream while getting the WSSU/HBCU experience. I just hope he slows down enough to enjoy the enjoy it while continuing to blaze his path.