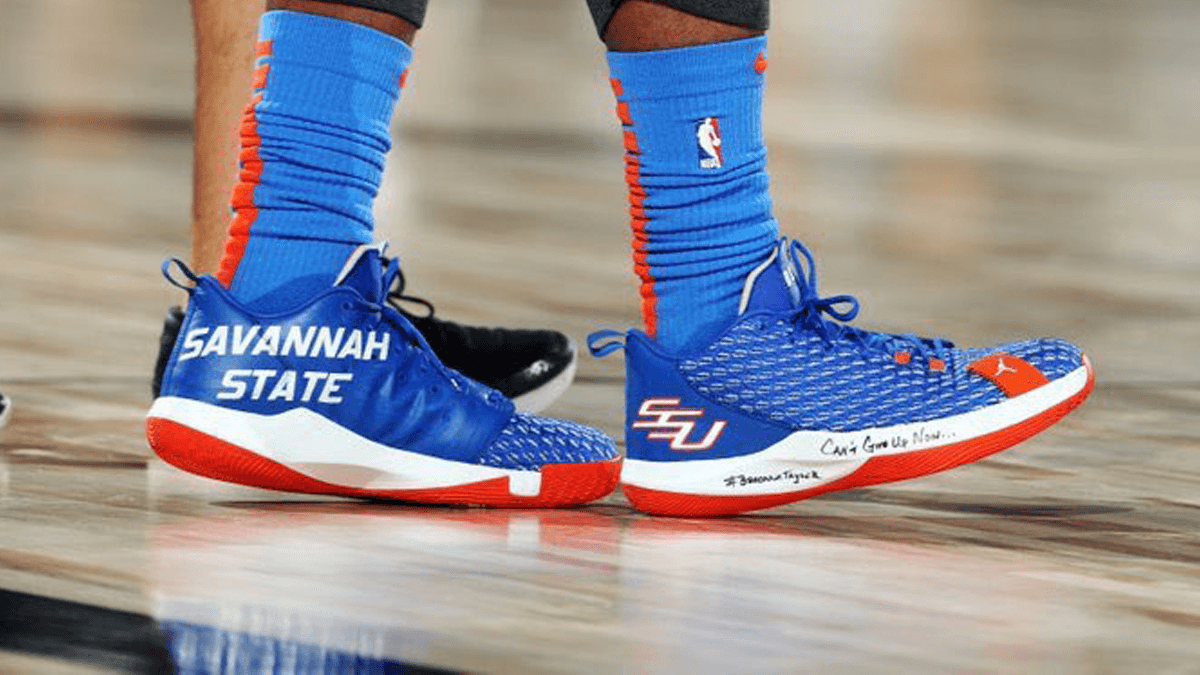 Savannah State fans get a great start to their Monday with a spotlight in the bubble.

Chris Paul and the Oklahoma City Thunder lost on Monday, but none the less it was a win for Savannah State University. The Tigers were in the spotlight today for the HBCU Sneaker Tour.

As usual, Chris Paul entered the arena in the NBA bubble sporting an HBCU tee shirt. This time it was the official school seal of Savannah State University. CP3 had the shirt beneath a denim jacket which was a bold choice considering the Florida heat and humidity.

Once inside he revealed his orange and blue colorways for his Jordan brand sneaker. This shoe didn’t feature the Tiger mascot but did have the “SSU” lettering on the outside with “Savannah State” on the inside of the shoe.

While not a spot-on match with hue, the Savannah State colors blended nicely with the traditional Oklahoma City color scheme.

“I love my HBCU because we aren’t the biggest or the most popular, but we root for each and every one of the Black Colleges & Universities as if we went there as well. Today was just finally our turn and I felt that,” wrote Twitter user @keeb_00.

Tears of Joy on the HBCU Sneaker Tour

Another fan was in virtual tears after seeing today’s choice on the HBCU Sneaker Tour. Twitter user @SISisms_ has an Etsy shop, VINTAGEUAPPAREL that designs the shirt that Paul had on. According to her she was indeed the creator and was quite thankful.

“To wake up and see @CP3 in a #VINTAGEUAPPAREL creation????? LORD, YOU DID THAT! Y’all let him know we want to be responsible for creating ALLLLL of his HBCU APPAREL,” she wrote.

That might be a lofty goal, but we all have wishes. CP3 was wishing for a win on Monday. The Thunder lost big to the Phoenix Suns 128-121. Oklahoma City plays the Miami Heat on Tuesday at 8 pm. Which HBCU will be next?