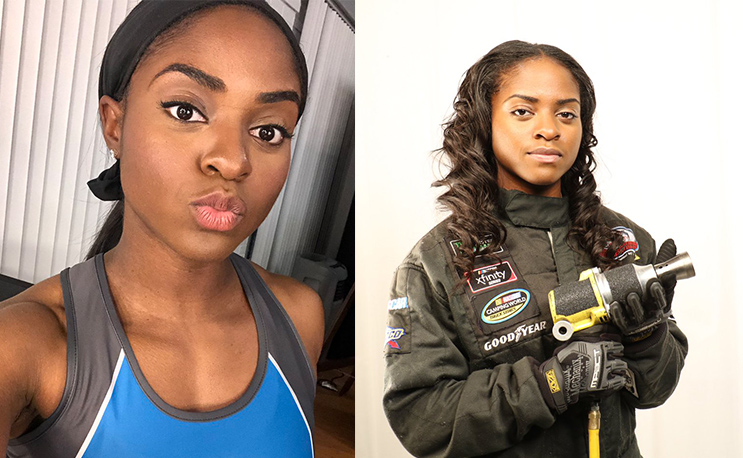 Brehanna Daniels has been working hard both day and night.

Former Norfolk State basketball player Brehanna Daniels made history when she became the first black female tire changer in NASCAR. Now that the sport is back after the COVID-19 hiatus there’s hardly time for her to catch a breath.

“Ever since NASCAR started back, I’ve been all over the place with such a busy schedule. The turnaround has been so quick. When we’re at the track, we’re there pretty much all day. Then it starts over the very next day,” Daniels said.

Her most recent work has included working on the no. 52 Xfinity car with driver Jimmy Means. In the Cup series she’s been on duty with the no. 78 car, while changing tires for the no. 7 in the Truck series. That’s a lot of numbers and there’s been a lot of days at the track.

Last week, for instance, Daniels was at Charlotte Motor Speedway on Monday, Tuesday, Wednesday, and Thursday. There was an Xfinity race to start the week, the Truck series was on Tuesday before the Cup race sat through the rain on Wednesday night before getting it in on Thursday.

The schedule has wrecked Daniels’ normal routine but it’s just a part of the job.

“Waking up trying to scramble to hurry up and get things done at home before going to the track and being there all day. It’s so weird being at the track on a weekday back to back when we normally race on weekends.”

This week has offered Daniels a slight break, with just two races on tap. The Cup series ran its race on Sunday, and the Xfinity race is on Monday night. Both events were held without fans in Bristol, Tennessee.

This former Spartan will have a few days to fall back into normalcy before a trio of races this weekend at Atlanta Motor Speedway.