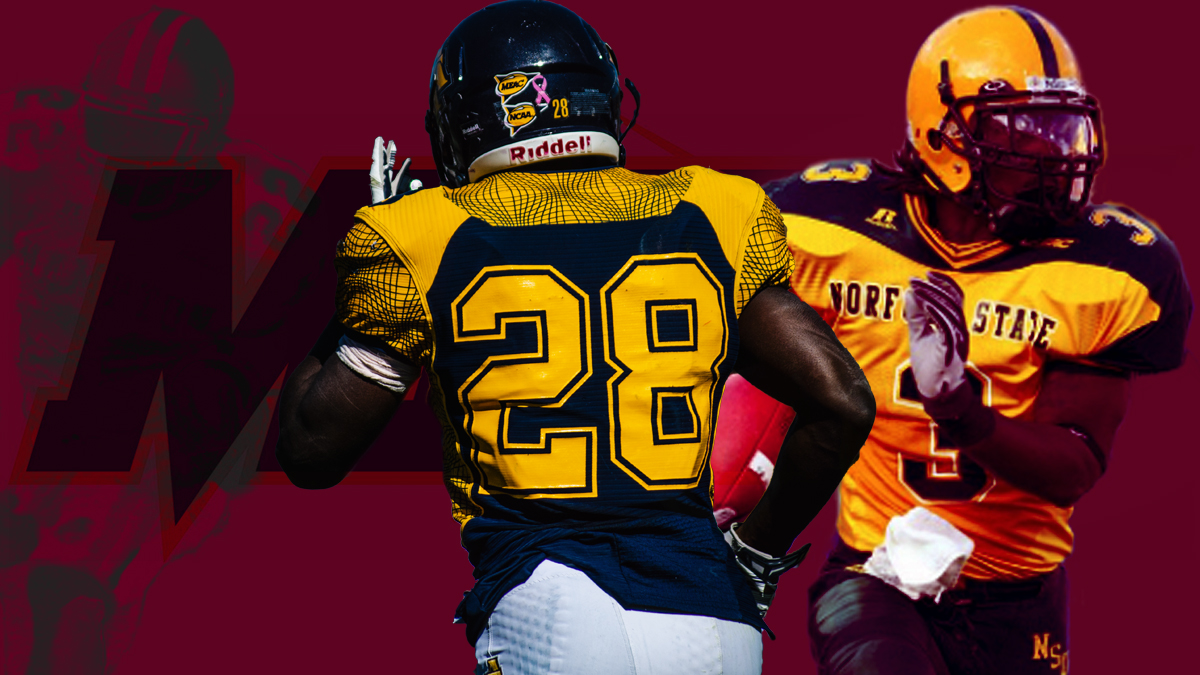 The top 15 rushers in the 49-year history of the Mid-Eastern Athletic Conference.

Hicks committed to UGA out of high school, but academic problems meant pushed him to SC State. He burst on to the scene as a sophomore in 1993 with 1,426 yards for SCSU, then carried the ball 252 times in 1994 and scored 132 points. He finished his career with 316 points, a mark only surpassed by Coley’s 326. Hicks was selected by the Chicago Bears in 1996 following his 1995 MEAC Offensive Player of The Year season.

Easily the greatest running back in school history, Reed’s name is still all over the MEAC record books more than 30 years after playing his last down. His yardage total reigned supreme in the conference for nearly 20 years before being broken. He ranks fourth in yardage despite eight backs with more carries than his 635, which he accomplished in 10 game seasons compared to 11 and 12 games for his successors.

Reed averaged 6.5 yards per carry for his career, second behind former A&T running back Maurice Hicks and scored 20 touchdowns on the ground as a senior while run-in for 1,512 yards in just 10 games.

Coleman stepped into the footsteps of Coley and re-wrote both the school and conference record books for a powerhouse Hampton team with a smashmouth style. He hit the ground running, literally, as a freshman in 2003 by scoring 18 touchdowns en-route to MEAC Rookie of The Year honors. He would top that mark with 19 as a junior in 2005, when he would claim MEAC Offensive Players of The Year.

By the time Coleman finished his assault on the record books he would leave as the school and conference all-time leader in yardage, attempts (856) and touchdowns (62). His rushing touchdowns may stand for a while as no one else has even topped 50.

Just as MEAC defenses were seeing Coleman off, here came South Carolina State speedster Will Ford. Ford was lightning in a bottle (his 6.4 yards per carry average is fifth in MEAC history) but also capable of carrying a heavy load, as his 763 attempts are third behind Coleman and Cohen.

Ford carried the ball 246 times in 13 games in 2008, earning MEAC Offensive Player of The Year honors.

Cohen entered A&T with little fan-fare and by the end of his college career was regarded as arguably the greatest offensive weapon in the conference’s history. He started off strong as Rookie of The Year in 2013 and then proceeded to win three-consecutive Offensive Player of The Year awards (sharing in 2014 with Howard QB Greg McGhee) to close out his career.

Cohen’s final two seasons were ridiculous, as he rushed for 1,543 yards as a junior in 2015, including 295 yards against Alcorn State in the inaugural Celebration Bowl. He somehow saved the best for last as a senior in 2016, rushing for 1,588 yards and breaking several MEAC records while setting himself up for a pro career.

In addition to setting a new yardage record, Cohen is the MEAC’s all-time leader in carries (868), which is no small feat given his stature and playing in a pass-happy era. Cohen, of course, is currently a valued contributor with the Chicago Bears.