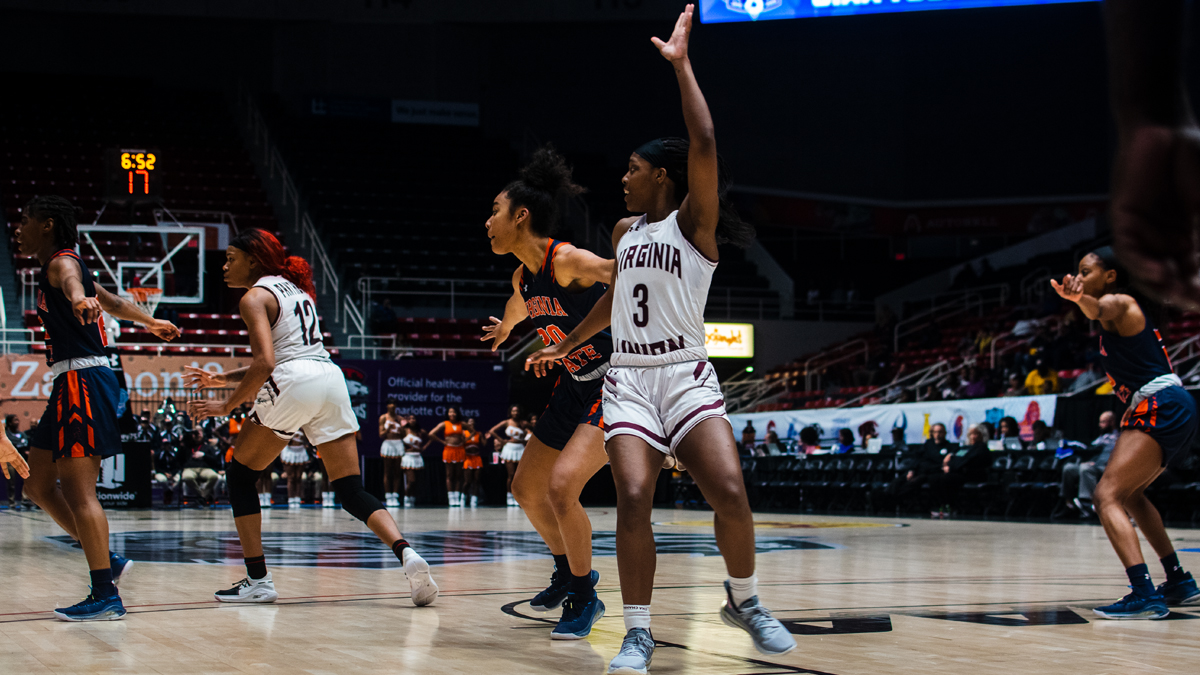 CHARLOTTE, NC – The CIAA North and South champions showed they are ready to hit the Spectrum Center floor for the semifinals in their respective Quarterfinal match-ups on Wednesday. Fayetteville State opened up women’s play with a 64-52 victory over Elizabeth City State. Virginia Union immediately followed with a 83-43 blowout win against Virginia State.

No. 12 VUU flexed its muscles in its blowout win over VSU, leading by as many as 45 points in the fourth quarter. Junior guard Shameka McNeill led all scorers with 20 points. Union led throughout the game and held VSU to single digits in the first three quarters.

“Our defense is a stingy defense,” a proud Head Coach Ann Marie Gilbert acknowledged in her post-game remarks. “and I’m so glad about how we fared today.”

Virginia Union earned the top seed in a CIAA North division for the second straight year, to the surprise of some. The Lady Panthers took a big hit this season in the losing Shareka McNeill, the CIAA’s top scorer averaging over 30 points per-game before being sidelined by injury.

“We’re a resilient team. We were all a little down at first… but this team, we just don’t make excuses. We pulled together and we played some of our best basketball,” said Coach Gilbert.

“…I can’t say enough about how they stepped up as a team. They let me know almost the day or two after our other twin [Shareka] was injured… they called and said “Coach, we know we can’t be her, but if you’ll give up permission, we’re [going to] step up and shoot those shots and hit them like we were her.”

Almost to-date last year, Shareka’s 59-point Quarterfinals performance powered the Lady Panthers to the Semifinals on the same floor that Shameka just held it down and led all scorers on. It’s now her turn to lead the pack.

“It feels great,” said McNeill about stepping more into the limelight. “I mean, I just have to maintain it and keep going, to the [champion]ship.”

Coach Gilbert recognized that McNeill cut her slice of humble pie too small and expounded on her junior guard.

“Shareka McNeill, a year ago, got a lot of the fanfare, she got a lot of the fans going and they supported her. They didn’t realize that Shameka… she is a soldier,” said Coach Gilbert. “She’s having an opportunity, a very different opportunity to be playing without her sister right now, but she’s finding her way. She’s so much more talented than you’ve even seen yet.”

Everyone will get another chance to witness, as the Lady Panthers take on the winner of Bowie State/Johnson C. Smith in the Semifinals on Friday at approximately 3 PM.

Lady Broncos shift gears at half

Fayetteville State was first to advance to the Semifinals, led by a 20-point performance from senior guard Katisha Hyman. Sophomore guard London Thompson added a 10-point, 12-rebound double-double. ECSU showed heart and outscored FSU 18-9 in the second quarter to go into halftime ahead one point. The Lady Broncos reconvened at the half and sealed the deal with a big fourth quarter defensive performance.

“Us, as a coaching staff, we were all saying things, and the players as well, that they know what they need to do” said Head Coach King-Coleman when asked what she said to ignite her players during halftime. “I felt like we could have been way more aggressive, and they knew that. It was a matter of them deciding to go get the game, but we knew it started with defense.”

“Obviously I want to go out with a bang,” said Williams describing her final tournament appearance. “Halftime I told them… let’s play for each other. If we come together, we’re going to win.”

FSU will face the winner of Lincoln/Winston-Salem State in the Semifinals on Friday at 1 PM.