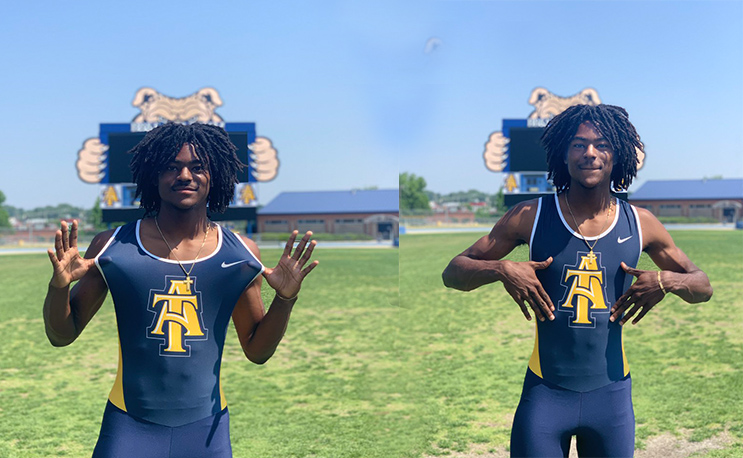 North Carolina A&T landed one of the top prep track stars in the nation in dramatic fashion.

Randolph Ross’ press conference started off like any top recruit’s decision announcement does.

The Garner (NC) High School track star had the logos of three Power Five schools: South Carolina, Ohio State and Iowa. But he chose none of those programs.

Instead, Ross turned them all down, temporarily confusing the crowd gathered in the gymnasium. After dropping the OSU logo, he revealed a North Carolina A&T tee shirt.

Yes, this talented student-athlete with a shot at Power Five programs chose an HBCU. The video has gone viral and garnered plenty of reaction.

Many people were overjoyed at Ross’ decision to attend an HBCU.

Others, not so much.

Ross is the son of Duane Ross, A&T’s track coach. But his decision to run for his father in Greensboro isn’t just about family ties. It’s also about joining a track program that has placed itself amongst the best in the nation.

The younger Ross is one of the best sprinters in North Carolina, with top 10 times in the 100 and 200 meters as well as the top time in the state at 400m with 46.80, the ninth highest time in the nation. He’s also got the second highest jump in NC and the fourth in the nation at 7-0.

The men’s track team was recently ranked as high as sixth in the nation, the highest of any Division I program at an HBCU ever. That ranking was achieved after picking up its third-straight MEAC Outdoor title on its home track earlier this month and picking up the indoor title earlier to sweep the crown.

For clarity, A&T’s men’s track and field program is ranked higher than all three of the other schools Ross had on his table. Despite that fact, many people cannot accept the fact that not only was choosing an HBCU plausible, it was actually the best decision for him. Including many black folks and some who went to HBCUs or even participated in sports themselves. With attitudes like that, we may be asking “what if the best black talent came to HBCUs forever.

Luckily, it appears that the next generation is okay with attending and thriving at HBCUs.