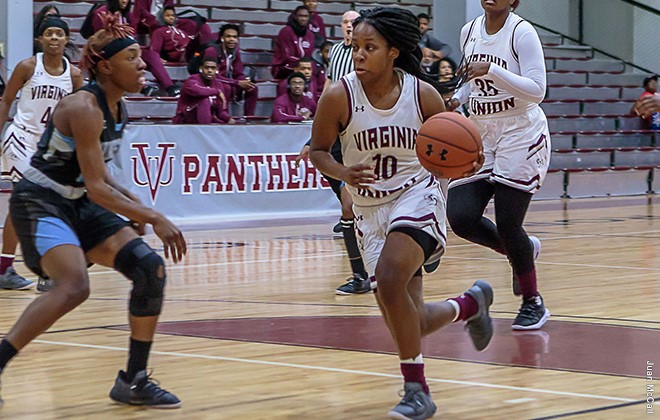 After claiming their second consecutive conference championship just under two weeks ago, the Lady Panthers aren’t done yet. No. 2 seed Virginia Union won 83-71 over no. 7 Edinboro in the women’s D2 Atlantic Regional tournament on Friday.

Union closed out the first half trailing Edinboro 17-15 after falling cold for the last five minutes of the quarter. VUU found it’s footing and outscored Edinboro 24-12 to go into the half with a ten-point lead, 39-29. Both teams were explosive in the third quarter and put up over 30 points; 34 for VUU and 33 for Edinboro. Union still had its advantage from the second quarter and went into the fourth up 73-62. The final quarter was the quietest, but a 7-2 run from Union in the last 1:21 of regulation punched the Lady Panthers ticket to the 83-71 win.

VUU’s Rejoice Spivey led all scorers with 27 points, followed by Shareka McNeill with 17 points. The Lady Panthers are now the sole CIAA women’s basketball team remaining in the D2 tournament. Union will advance to face no. 3 seed Indiana University (PA), the team responsible for taking down Bowie State just prior to Union’s game. Tip-off is Saturday, March 16 at 5 PM.