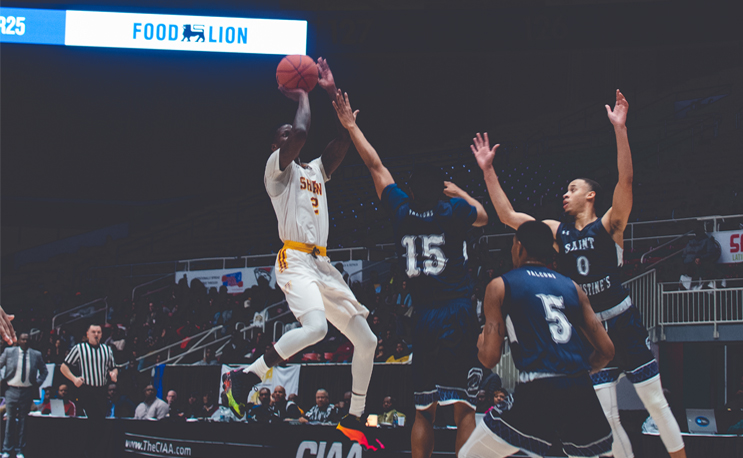 Amir Hinton led Division II in scoring his lone season at Shaw University. Now the redshirt junior is ready to declare for the NBA Draft.

It was fun while it lasted, but it seems Amir Hinton’s time at Shaw has come and gone.

The Philadelphia native won’t return for another run at the CIAA title, as a source told HBCU Gameday he would declare for the NBA Draft and begin his pro career. That news came on the heels of his 34-point performance in his team’s CIAA title loss to Virginia State on Saturday.

Hinton basically confirmed the report after the game in an Instagram post, writing he had played his last college game.

“I couldn’t be more grateful (SIC) for the opportunity to do what I love and play college basketball, and not be in the streets or doing something else,” he wrote.

It’s rare that a Division II player declares for the NBA Draft early, but scouts have been in attendance throughout the season, including the CIAA Tournament. The Cavaliers and Clippers are amongst the teams who have sent scouts to watch Hinton as he led his team to the title game.

He’s got the size and speed to play at the next level as a guard. And he sure knows how to score in a of ways.

Hinton played just one season at Shaw, but it was a memorable one. The 6’5 guard averaged 29.4 points per game after transferring from Lock Haven (PA) where he averaged 23 points per game in two seasons after redshirting as a freshman.

He left his mark in that one season scoring 30 or better 14 times, 40 or better five times, and set a Shaw record with 52 points at Tampa on Dec. 19. Hinton shot just under 49 percent from the field and 89 percent from the free throw line. However, Hinton showed he was more than just a scorer as he also averaged five rebounds and five assists per game.