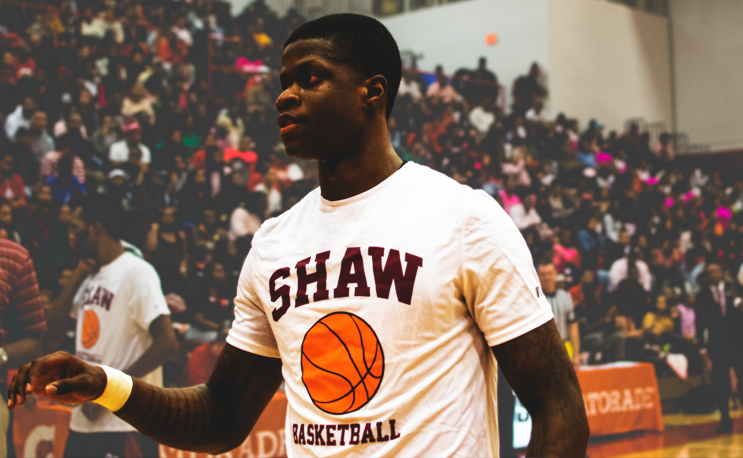 Amir Hinton is the latest guard from the Philadelphia area to come south and give opposing CIAA fans the blues.

The game was supposed to have already started by now, but Shaw’s basketball team is waiting outside the gym door at C.E. Gaines Center at Winston-Salem State as its spring sports teams are being introduced to the crowd. This will be the first time Amir Hinton has visited the stuffy, vulnerable gym. It’s about the same size as the one he played in at Abbington High School on the outskirts ofNorth Philly.

Hinton and his teammates are greeted by booing, hissing taunts from the crowd at Winston-Salem State as they warm up. They’ve been waiting for the Bears from Raleigh, who have been a thorn in their beloved Rams side over the past three seasons. They’ve also been waiting for Hinton, Division II basketball’s top scorer at over 31 points per game. DP The MC, WSSU’s host/hype man makes sure the crowd knows that Hinton is the tonight’s main target.

By the time the junior guard hits the Triad, his numbers proceed him. He has topped the 30-point mark nine times, put up 40-plus three times and gave Tampa 52 back in December, setting a new school record. His exploits have been the lead story on HBCU Gameday through the first few months of the season. He even had his own BallIsLife clip drop a couple of days ago.

His coach, Joel Hopkins Sr., isn’t suprised at the numbers his prized transfer from Lock Haven University, a Divsion II school in the PSAC, has put up so far. Hopkins knows talent. He coached Tracy McGrady as a senior at Durham’s Mount Zion Christian Academy and then brought Shaw a CIAA title with Ronald “Flip” Murray at the helm.

“I knew Amir could do it. He’s been doing it before he got here,” Hopkins said. “He had 39 points against Penn State last year in an exhibition game. We played him last year and he had about 36 against us. He’s a great player. He’s a great kid. An honor student, he’s got his head on straight. It’s an honor to coach him.”

Hinton burst on to the scene at LHU, scoring just under 24 points a game as a redshirt freshman during the 2016-2017 season, earning PSAC Rookie of The Year Honors. He followed it up with a sophomore campaign in which he again tossed in better than 23 points a night while shooting 48 percent from the field.

The 6’5 guard is a natural scorer, the kind that CIAA teams have been getting from the Philadelphia/Delaware/Jersey area since Big House Gaines and Cal Irvin built dynasties in North Carolina from the area. Irvin picked up scoring sensation Joe Howell from Philly and do-it-all Al Attles from Newark for A&T while Gaines struck gold with Cleo Hill Sr. from Newark and then did it again by plucking Earl “The Pearl” Monroe off the playgrounds of North Philly. The pipeline continued into the 80s with Virginia Union’s A.J. English (Wilmington, DE) and Norfolk State’s Ralph Talley (Atlantic City, NJ). Both of those guys won D2 Player of The Year Honors and were drafted. And then there’s Murray, who led Shaw to the 2002 CIAA title, the first in school history.

That pipeline has cooled off a bit over the past decade or so as CIAA schools’ basketball budgets got smaller, scouting got better and the emphasis on playing Division I ball has many borderline talents willing to sit the bench in hopes of making it to “The Big Dance” and getting a pro deal. Last season Hopkins imported former UNLV and Arizona State big man Savon Goodman from the City of Brotherly Love. He helped Shaw win the Southern Division before landing a pro deal overseas.

It’s no surprise that Hinton didn’t know much about the history of the league he is currently giving hell. Outside of Virginia Union’s Ray Anderson, who hails from Wilmington, DE, there haven’t been a lot of top players in the league from the region lately.

It’s midway through the first half, and Shaw is down 16-15 to the home team. Alex Owens catches the ball on the block, slips but manages to toss the ball to Hinton on the wing. All eyes turn to him. He drives to the basket with his left, pivots to the right and switches the ball to that hand, double-clutches in mid-air and demands the ball go in.

It complies. Hinton turns to the crowd, flexes and lets them know that he’s the real deal. There’s nothing contrived or forced about it. He’s just giving the people a show.

Then he goes to the free throw line. That’s what you don’t want. He gets there 13 times a game, and he hits 12 of them. You’re almost better off just letting him get to the basket.

By this point, the crowd at the Gaines Center is starting to realize the hype is real. Or so it seems.

Midway through the second half, the two teams are still battling. Shaw is clinging to a 54-53 lead. The crowd, sensing a run might be around the corner, starts giving Hinton the business. Chants of “OVERRATED” rain down from the top of the pep band and Hinton picks up his fourth foul, earning him a spot on the bench. He has 21 points.

WSSU takes advantage, gaining a 61-56 advantage as Hinton bides his time. By the time he gets back in the game, the lead is 61-59. He gets to the line twice in a 30-second span, knocks down all four free throws to give his team a 64-62 lead with 4:15 to play. Next trip down the court, he drives to the bucket, pushes the lead to four with a layup. Next trip, he hits Derrick Randolph at the top of the key, and he knocks down the triple.

Shaw is clinging to a two-point lead with 46 seconds left. The crowd is on its feet, hoping that despite self-sabotaging itself with poor free-throw shooting, there is a chance that WSSU can end its three-year drought to its private school neighbor to the east.

Hinton gets the ball in the corner with 34.1 seconds to go and suddenly gets possessed by The Spirit of The Pearl in the gym next towhere he put up 41 ppg. He drives hard left and spins back right, leaving freshman defender Xavier Fennell falling back towards the door. Mason Harrell steps up to play defense long enough for Fennell to gather himself up and form a double-team, trapping Hinton under the basket with Will Crandell just a step away. He tosses a hook just slight enough to avoid getting called for his fifth foul but solid enough to gather space to put up a short jumper. It’s good.

As soon as it drops in Hinton raises his right arm and points at the crowd as he runs the other way as reality sinks in for the home crowd.

Hinton finishes the game with 31 points, his average on the season. That’s two points higher than Campbell’s Chris Clemons, who leads Division I basketball, slightly less than Aston Francis’s 33.1 in Division III. With roughly a month to go before the CIAA Tournament, Shaw (8-9) is just a middle of the road team, despite Hinton’s scoring prowess.

He’ll likely have to score at the same rate to keep his team playing deep into the tournament, something it hasn’t done in the past few seasons. Saturday against rival St. Augustine’s he was “held” to 23 points, his second lowest output in the year as Shaw dropped a heartbreaker to its crosstown rival.

But as he showed on Wednesday night at WSSU, he’s more than capable. And he’s got history on his side.