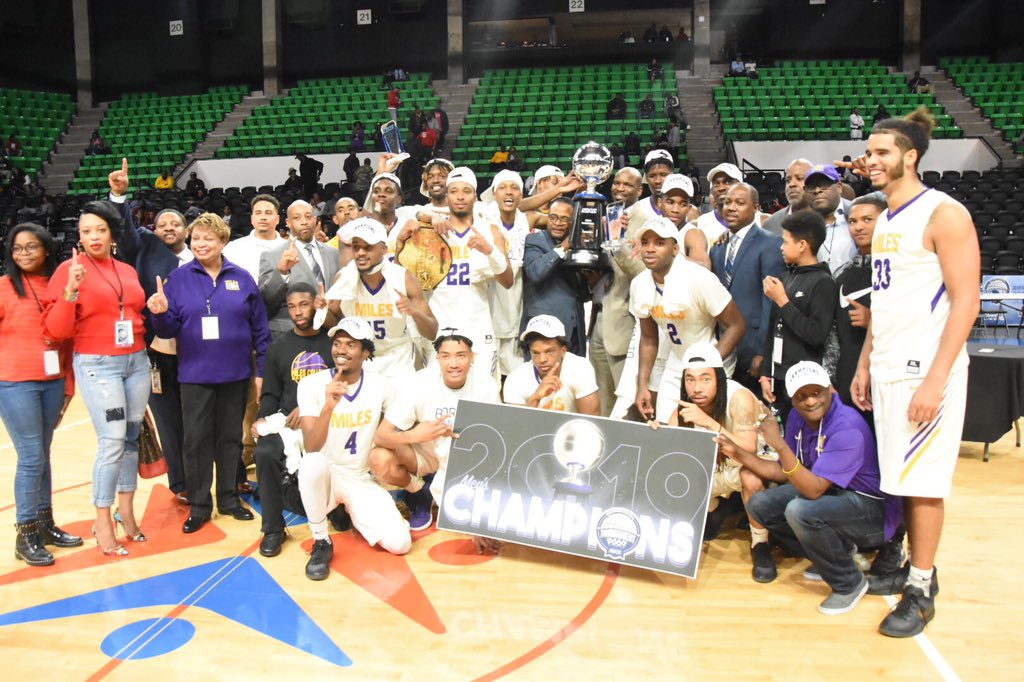 With its first ever SIAC Championship in pocket, Miles looking toward NCAAs.

BIRMINGHAM, AL–Miles College is known for many things in HBCU circles, basketball has never been one of them. Until now. It was no surprise that on Saturday night Fred Watson stood at center court with the championship net draped around his neck in Birmingham. It’s not his first rodeo, he had five championships under his belt already.

The fact that in less than a year he brought the Golden Bears from the outhouse to the penthouse is a feat to marvel. Miles (21-8) defeated a red hot LeMoyne-Owen (19-10) team 70-46 on Saturday to claim the first-ever championship in program history.

“When I came in I came with the full support of the community, the school, the administration, it feels great to have that type of support behind you and I just wanted to pay it off,” said Watson.

What a payoff. Last season Miles wasn’t even in the discussion of contending for anything with a 7-20 overall record. When the season ended two years ago with a 9-17 record the only conversation worth having was when does spring football begin.

Now the talk is about can Miles win a national title? The NCAA selection show isn’t until March 10, but the Golden Bears are in thanks to the automatic qualifier. How far can they go?

Well if you believe that defense is the most important ingredient to a championship run, they might just win it all. Miles leads the nation in points allowed, holding opponents to 56.1 points per game.

Bears versus the region

Fred Watson believes in the strength of SIAC basketball and believes that it will carry beyond the conference in the postseason. Miles wasn’t ranked regionally heading into the tournament but they’ve had a decent showing against opponents who are.

The Bears lost to West Alabama by a combined five points in two match-ups in November and December, West Alabama is currently ranked sixth in the south region. Just before Christmas the Bears whipped up on Morehouse, 81-63, when the Maroon Tigers were ranked no. 11 in the country. Morehouse peaked with a no. 3 national ranking this season. The Maroon Tigers were ranked ninth in the region heading into the SIAC Tournament.

The Golden Bears will find out their destination this Sunday and with that a chance to make even more history in the Watson era. During his time at Benedict, he led his teams to the NCAA Tournament nine times, including one appearance in the Sweet 16. Can he take Miles even further? If so, spring football can wait just a little longer.